currently, the hadoop based software company cloudera creates the new certification called data science essentials exam (ds-200) . one goal of the certification is to learn tools, techniques, and utilities for evaluating data from the command line. that’s why i am writing this blog post. the unix shell provides a huge set of commands that can be used for data analysis. a good introduction to unix commands can be found in this tutorial .

now, let’s answer an analytical question : what is the city with the biggest population in the data set? the second and the fifth column can be selected with the help of awk .  a wk creates a list where the population is on the first position and the city name is on the second position. the sort command can be used for sorting. therefore, it is possible to find out which city in the dataset has the biggest population.

it is also possible to make joins in the unix shell with the command called join . the join command assumes that input data is sorted based on the key on which the join is going to take place. you can find another dataset on github which contains countries. this dataset is a comma separated list as well. the 14th column in the country dataset represents the capital id which is similar to the id in the city data set. this makes it possible to create a list of countries with their capitals.

finally, let’s get a deeper look in the city data set. the question for this example is: how is the distribution of cities in the city data set? a combination of the sort and the uniq commands allows us to create data for a density plot . this data can be streamed (>) to a file.

gnuplot is a command which allows us to visualize the density data file. we have to tell gnuplot what it has to print and how it should be printed. you can use gnuplot while telnet or ssh session as well because plots can be printed in acsii-characters. therefore, the terminal type has to be set to ‘ dumb ‘ 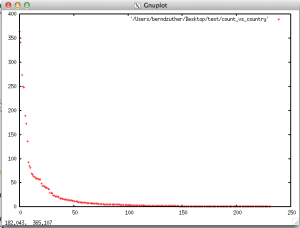 density plot for the distribution of city related to a country

i hope you enjoyed this little excurse in data analysis with the unix shell. it is useful for students which are currently working on the study guide of data science essentials (ds-200) beta. furthermore, i demonstrated how powerful the unix shell can be used for basic analytics. the unix shell is also able to do basic things like an analyst normally is executing in a statistical software as r .