earlier this month, gartner released survey results that suggest that there aren't too many dbas in the nosql space. take a look: 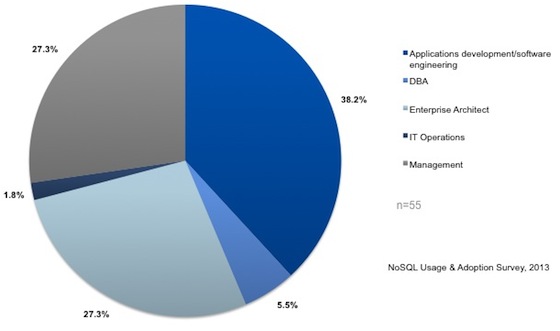 what's unclear, though, is the reason. the survey results might be questionable - selection bias, suggests gartner - but the number is still surprising, and it has a number of people speculating. the folks a mynosql list a number of possibilities :

the orchestrate blog , on the other hand, suggests that the need for dbas may be replaced in nosql with a different role, which dbas may or may not gradually become:

ten years from now, making sure your data is safe, well-managed, and accessible will be just as important as it is today. as developers continue to exert more control over an application’s lifecycle, and as dbaas takes off, database administration will give way to data service administration. whether the dba role transforms into the dsa role or goes away altogether is beyond my guess.

scalebase also weighed in , suggesting that devops may be to blame:

devops are the “cool” cloud guys who promote the trendy nosql revolution, in which the world is schema-less and much easier to maintain, implying that dbas are no longer required.

so, what do you think? assuming the dbas aren't just shying away from surveys, what does this mean for nosql?