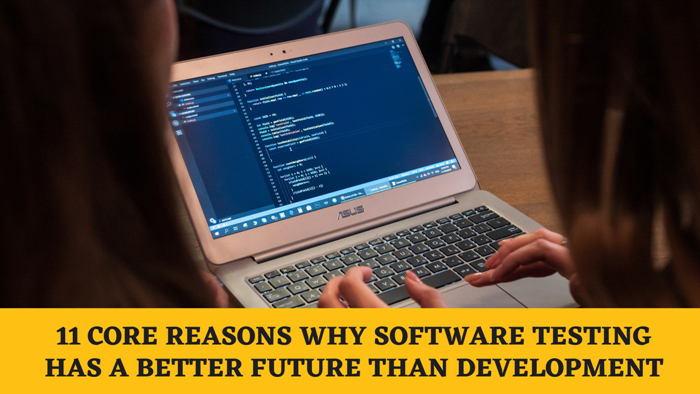 Even though there is a long-running debate on which one amongst these two holds a better future, it seems that tests hold great possibilities. There has been always been a conflict between the two prevailing roads in software science – software tests and software development. Persons

are time and again left confused while choosing either of them for their profession. The reason; there are several misconceptions on both these career choices that over weigh one another.

Usually, software test is overlooked as contrast to software development. There are many freshers and dropouts consider it as a worthless job and don’t value it as the software developer job. Well, this confusion is still a big gap but software testing is simply another world if mastered. Your software/ app is in high risk if it is not well-tested. Software industry is aware of this threat and they are giving extra prominence to QA testers then they used to be, in simple word, the profession is booming at this point.

Here we are breaking such misconceptions and sharing details to assist you know how much potential the QA software tests industry holds and why enrolling for the software testing training can provide you a better future.

To substantiate this statement, we have gathered together some of the core reasons which reveal that QA testing is the probable winner. Let us have a quick glance at them.

Software with no tests can’t succeed as a service or product. Testing makes certain user satisfaction and error-free usage of an app. As digitization keeps on changing software, all of them will need to be tested properly, irrespective of how they were developed. Besides, software test is the final stage before an enterprise can launch a product, so it holds greater responsibilities.

In the IT sector, it is a fact that somebody with a broader series of skills stands extra chances of rising the corporate ladder up speedier. Apart from having the age-old test expertise, QA specialists can appropriately read and understand the development code to determine and describe something is ineffective or incorrect and how it can be enhanced.

Numerous newest technologies are splashing up in the item test world, specifically Artificial Intelligence and Machine Learning. In spite of the fact that the development of both is still fairly far away, they undoubtedly have a practical use from a test point of view, and they are arriving earlier than we might think. They are now affecting the QA testing arena by making it extra entangled and that effect will simply keep on developing. We are starting to see Artificial Intelligence and ML technologies engaged with additional programs, and the prospective for those advances to expand QA skills is striking.

Organizations place a higher expectation for QA experts or testers. From the implementation of each test case to the test scenarios documentation to confirm zero errors in the system – everything has to work flawlessly. And while things went wrong, sometime the tester is blamed.

5.    It’s hard to perform than development

Those able to carry out arduous jobs, hold bright prospect than who do not. Although there are training courses accessible on testing, they generally come with dubious real-world value. As a QA expert, you would require t apply your imaginative thinking and experience capacity to get the task done.

The IT domain went through recurring changes. When software developers do require accepting technologies, testers need to embrace them extra to stay on the similar page with shifting mode and techniques of development. Besides, the testing field is coming up with newest technologies. For example, automated testing, which is already in huge demand nowadays, will continue to develop speedily in the future and QA experts would require embracing it.

7.    A Scarcity of skilled QA specialists or testers

Regrettably, the testing field is loaded with poor quality QA experts or testers. Although many of them come with chunks of technologies and skills, they often struggle to respond few easy questions, which is why enterprises keep on seeking expert and capable testers continuously. This is not the case with the software development arena which is not merely saturated but also flooded with loads of skilled developers.

Whilst a software developer is required to consider about the development procedure mainly a QA tester requires thinking about distinct approaches/ strategies to comprehend and get the task done. She/ he can’t consider like a tester simply. Instead, the individual requires thinking like a developer, distinct kinds of stakeholders, end-users, and the product owner. There are loads of distinct caps QA experts needs to put on, which not just increase the horizon of his/her understanding but add some value to the situation as well.

With growth in the IT domain, QA experts have to encounter various sorts of problems and puzzles frequently. On the flip side, the area of software development doesn’t encounter such recurrent changes. So, those seeking to enter into a challenging field ought to go for QA testing.

Several persons accept there is a crucial dissimilarity in pay between a software tester and software developer, with the former being paid considerably less. Is it true? This might be misleading. The payment relies upon several components, counting of the scope of work she or he is managing on a daily basis, the software testing enterprise a person is working for, professional aptitudes, experience, and so on. Yet, there is not much difference between the salary range of an individual from an accomplished tester and a development team. The handful of companies, like Google and Microsoft, give even a better compensation to the QA testers instead of software developers.

To some extent, this appears as a result of a huge employees demand for QA testers as per the modern employment market. Experts, who handle mobile tests, development tests, and website tests, often end up being extra prevalent at the job market than developers.

It is not that QA testers have to be must upgrade themselves and revolutionary in terms of technology. The requirement of testing has made oldest methods to evolve. Owing to this, QA testers have additional jobs for them. Everybody in the software world believes testing to have a firm clutch shortly. The prospect of software would be in the hands of QA experts or testers.

In a world commanded by the technologies such as Artificial Intelligence, The Internet of Things, and MI, tests will continue to grow at its core. Despite this growth, it’s not strange that the majority of the experts emphasize the necessity for QA testers to be obtainable to the revolution and become serious about accepting new techniques too.

As a result, oldest methods to cope with testing are evolving too. Eventually, such evolutions are opening extra doors for QA testers in the test world, as test is constantly progressing. Ultimately, each specialist believes to be optimistic about the future of rising software testing domain. This is due to the fact that the opportunities for QA testers are only growing. And these possibilities will get additional interesting too as the software testing is becoming a additional challenging, engaging and in-demand ground so, the future holds lot many.

The process of building software which is called software development is a preliminary phase, however, once the software has been launched and ready to be delivered to consumers, the QA testers ensure the product with the conditions. Test is an achievement of software with the aim of finding and mitigating a bug.

Keeping the above points in mind, it can be said that QA testing is perhaps more challenging than software development. And it is a renowned fact that remuneration, job satisfaction, and prospect is likely to be greater for the professions with more arduous responsibilities than those needing relatively easier responsibilities to manage.

Future of an uncertain job depends on your determination, ability, dedication, and authentication, towards your work. It is entirely your knowledge that turns lowest paid occupation into a decent one. Be a software developer or a QA tester; you have to show yourselves and respect both the professions. In short, the brightest future depends on your choice, capabilities, interest, attitude, and most significantly the domain understanding. If you have outstanding knowledge about the field, years of expertise and related skills, long term sustainment is assured.

Both the professions require an extraordinary qualification and skill set to excel with a higher compensation package. All you require is to scrutinize and decide which role is best for your career and for you. You will be fervent to deliver the best if you care for your job. Hence, select wisely based on the above factors and carry on.