For most of us around the DZone office, 2017 seemed to go by in a blur. At the same time, it's incredible to see how much has changed in 365 days. For instance, this time last year, we were sitting at about 4.3 million pageviews over the course of 30 days. Now, we're over 6.5 million — about 51% year-over-year growth.

So, thank you to all our readers for helping make DZone better by the day!

But what led to that growth?

Sure, there were our classic bastions of strength — if you're on DZone, according to the math, you're probably here for our Java and Web Dev content. But we've made a some subtler (and not-so-subtle) changes as well!

So, without further ado, let's see what changed on DZone in the year 2017.

Our most obvious changes were the additions of two new major Zones — Security in January and AI in July. Previously, you tended to find a lot of security-oriented content in our Performance Zone. Meanwhile, AI/ML/DL/NLP/etc./etc./etc. content was generally at home in our Big Data Zone.

We'll dive deeper into these new zones in a future article.

One of my favorite new initiatives (and something that was incredibly popular around the office) was the introduction of our Zone Leader Smackdown series.

For those who don't know, our Zone Leaders are a group of developers who help us curate and create the content you see on DZone. They're our resident experts, and chances are that you've seen at least a few of them around the site, like John Vester and Tim Spann.

So, what do you do when you've got a bunch of smart people sitting around?

You pit them against each other, of course.

Our first Zone Leader Smackdown ("Java vs. Kotlin") took place on Aug. 18. It was a battle to the death featuring Grzegorz Ziemoński, who insisted that Java was the superior language, and James Sugrue, who said that Kotlin beat out Java.

Both men made compelling arguments, but Java (and thus Grzegorz) came away as the winner. 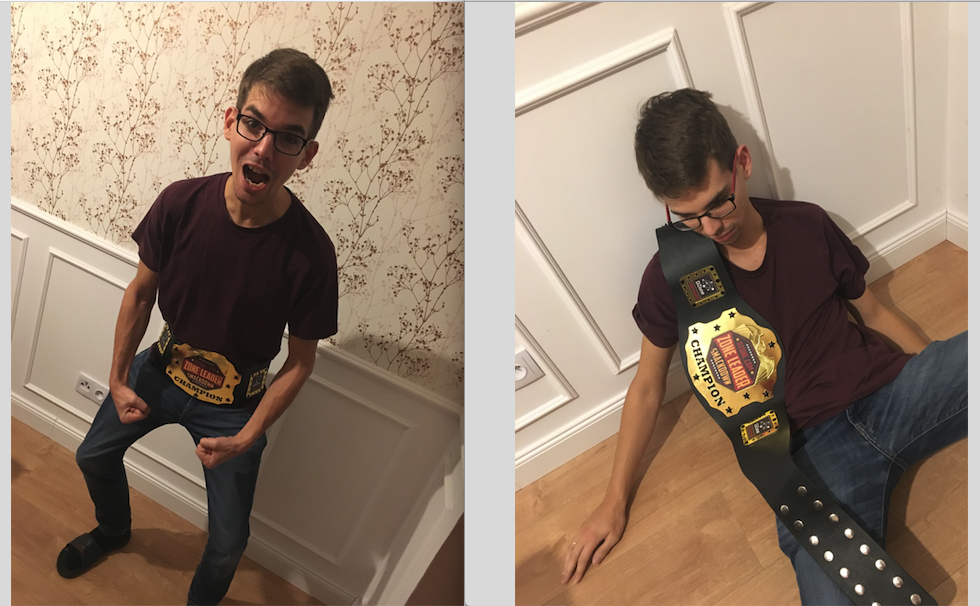 I'd quote Hulk Hogan about his 24-inch pythons, but this was a JVM battle, so no Python.
No, Jython doesn't count.
(And yes, that's a real belt.)

Hrm. I wonder if that has anything to do with the fact that we used to be called JavaLobby...

Meanwhile, Round 2 ("Will AI take our jobs?") took place on Oct. 13 and featured the wife-and-husband team of Cate Lawrence and Chris Ward.

Cate argued the pro-AI side, exploring the benefits that artificial intelligence will bring to humanity. Meanwhile, Chris took the anti-AI stance — or what we referred to around the office as the "Didn't you see what happened in Terminator?" stance.

Tragically, while Round 1 is lost to history, a video of the second Smackdown lives on, so I won't spoil the ending — though it does feature an incredible come-from-behind victory. Got an hour and 20 minutes to kill and want to hear some incredible banter? Take a look (and bring popcorn. Preferably not popped in a smart microwave).

Please note that much like wrestling, the INTENSE DRAMA that unfolded during both smackdowns was hyped up. (My sincerest apologies to anyone who didn't know wrestling was scripted before just now. It's time you learned, though.) Our Zone Leaders are smart enough to know there's no such thing as a perfect language.

Rest assured, the Smackdown will be back in 2018.

The Writers' Zone is our home for contributors. It's hidden for now, but we hope to get it to a more visible place on the site in the near future. Still, if you're interested in writing for DZone, that's your one-stop shop.

For instance, it's where we house our:

Basically, if you're interested in sharing your knowledge with fellow devs, the Writers' Zone is the place to go to get started.

Looking for a new job? (It's all right, you can pretend to say no if your boss is right behind you.) Well, we decided to open up a portal just for you. Our Jobs section has dozens upon dozens of open positions in software companies all over the world, including for big names like Google.

The interesting thing is that you know the list is curated for those in the software development/engineering/architecting space. You know, basically anyone reading this.

If you're in a pinch for a new position, give it a look. Just... maybe not at work.