If you are wondering whether there is a way to avoid these problems, I am very much pleased to inform you that there is an ORM tool called Hibernate that you can use to overcome this.

Before getting into that, I would like to explain what is Hibernate and JDBC.

JDBC stands for Java Database Connectivity. It is a free open source application programming interface for Java that enables applications to access databases. It enables developers to create queries and update data to a relational database using the Structured Query Language (SQL).

Hibernate is a free, open source object-relational mapping library for Java designed to map objects to an RDBMS and to implement the object-oriented programming concepts in a relational database.

So, without further ado, let's take a look at all the reasons why you should consider Hibernate over JDBC.

In JDBC, you need to write code to map the object model’s data representation to a relational model and its corresponding schema. Hibernate itself maps Java classes to database tables using XML or by using annotations. The following example will help you understand how object mapping is done in Hibernate

In the above example, you can see that by using JDBC, you need to set every property of an object upon fetching the data each and every time. But in Hibernate, we need to map the table with the Java class as mentioned above.

Hibernate’s code is database independent because you do not need to change the HQL queries (with a few exceptions) when you change databases like MySQL, Oracle, etc. Hence, it is easy to migrate to a new database. It is achieved by using a friendly dialect to communicate with the database. The database can be specified using a dialect in the Hibernate configuration XML as follows.

For example, consider the following scenario. You need to fetch the first 10 entries of a table. How this is implemented in different databases is explained below:

In Hibernate, this can be done as follows

Thus your query statement need not change, irrespective of the database you are using.

Hibernate minimizes code changes when we add a new column to a database table.

Hibernate reduces the amount of repeating lines of code, which you can often find with JDBC. For your understanding, I have left a simple scenario below.

In JDBC, as mentioned above for inserting a record, you will be creating a prepared statement and will be setting each column of a table. If the number of columns increases, the statements will also increase. But in Hibernate, we just need to save the object with persist(Object);.

We can achieve lazy loading using Hibernate. Consider an example where there is a list of users in the user table. The identity proof documents uploaded by the users are stored in the identity_proof table. The user has a ‘one to many’ relationships with the identity_proof. In this case, the user is the parent class and identity_proof is the child class. If you fetch the parent class, i.e the user, all the documents associated with the user will also be fetched. Imagine the size of each document. As the number of documents increases, the size of data to be processed also increases, and hence it will slow up the application.

With Hibernate, you can specify the fetch type for data as LAZY. If you do so when you fetch a user, documents will not be fetched. You can fetch the documents where you want using Hibernate’s initialize() method.

JDBC will throw SQLexception, which is a checked exception. So you will be writing “try-catch” blocks in your code. Hibernate handles this by converting all JDBC exceptions to unchecked exceptions. Therefore, you need not waste your time implementing try-catch blocks.

In Hibernate, you don’t have to commit and roll back these transactions, as it is implicitly provided.

It is easy to create an association between tables using Hibernate. Associations like one-to-one, one-to-many, many-to-one, and many-to-many can be achieved easily in Hibernate by using annotations, mapping the object entity of the required table. To read more about these associations, kindly go through this link. An example for creating association is given below: 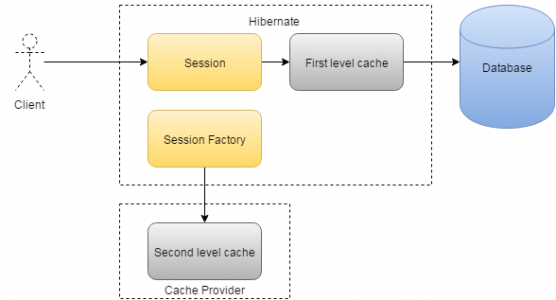 Hibernate provides a caching mechanism, which helps reduce the number of hits, as much as possible, that your application makes to the database server. This will have a considerable effect regarding the performance of your application. There is no such caching mechanism available in JDBC. This is because Hibernate stores the object in session, which is available until the transaction is active. When a particular query is executed repeatedly, the value stored in the session is used. When a new transaction begins, the object is fetched again from the database and is stored in the session. In fact, two levels of caches are provided by Hibernate. To learn more about Hibernate caching, refer to this link.

Database versioning is an important feature of Hibernate. Hibernate enables developers to define version type fields in an application, which is updated when data is updated every time. The advantage is if two different users retrieve the same data and then modify it, and one user saved their modified data to the database before the other user, the version is updated. Now when the other user tries to saves their data, it will not allow it because this data is not up to date. In JDBC, this check is performed by the developer.

Hibernate provides a library called “Envers”, which enables us to easily gain audit functionality. It creates tables and stores the audited data with version number from where we can track the changes made to the entity. Let me explain how auditing is done using Envers.

When we add the @Audited annotation in our entity class, Hibernate will create a table called User_AUD to store the audited entries. The table will contain two additional fields — REVTYPE and REV. REVTYPE is the type of the revision. It can store the values as add for inserting, mod for modifying, and del for deleting. The REV field contains the revision number of the stored entry. Hibernate creates an extra table called REVINFO in which the REV number is mapped with a timestamp when the change of the entity happened. You can also customize the revision table using @RevisionEntity.

Hibernate provides support to JPA annotations like @Entity, @Table, @Column, etc. These annotations make the code portable to other ORM frameworks. You can find some of the annotations explained with an example in this link.

You need to set the properties in Hibernate.cfg.xml as required to enable connection pooling. A sample property is shown below.

Note: You can find some of the other open source persistence frameworks in Java by following this link.

Published at DZone with permission of Mohanakrishnan Aruloli . See the original article here.