as a mobile evangelist a big part of my job is trying to figure out how to get people excited about building apps. my team and i have tried a number of strategies this year ranging from training to creating tools and even hosting our own events. unfortunately, we just weren’t reaching the numbers we were hoping for and i had this nagging feeling we were missing something important. over the holidays i worked with some really smart people to come up with a few ideas that resulted in 169 apps in 24 hours. this blog post is the story of how.

back in october i bumped into paul decarlo at houston techfest. i had originally met paul a year earlier when i was teaching windows phone development at u of h and paul was completing his masters. in the time that followed, paul actually started his own side business selling applications in the windows phone marketplace and business was good. i had an idea that i wanted to do something with students, but i didn’t quite know what. while we were talking at techfest i found out that paul was the microsoft campus rep, asus campus rep and rockstar campus rep all at the same time while he was at u of h. he told me about these crazy lan parties where they would bring in rockstar and bands and stay up all night. i knew there was an idea there, but i didn’t know what it was.

fast forward to december and paul was reaching out to me because he had a friend he wanted to nominate as the new microsoft rep at u of h. that friend was rick gentry and i was able to help get rick nominated and hired in that same month. about that time i was talking with deanna robison about our marketing budget and about trying to excite students. we kicked around the idea of buying a bunch of $10 amazon cards as a way to entice students to build their first app. she also knew we were getting a bunch of phones. we didn’t know how many but we liked the idea of giving students a phone for every three apps they got into marketplace.

on a tuesday night in early february, paul and rick and i all got together at a small vietnamese place on bellaire. i got microsoft to pay for the meal and the three of us brainstormed for several hours about how we could do something big at u of h. we knew we wanted apps and we knew we wanted to include as many people as possible. going on the assumption of cards and phones, we identified three different “groups” of students that might attend our event. the first group were sr. cs students who had development experience and just wanted the challenge. the second group were actually business students who didn’t have strong development skills but were interested in being able to say they had put an app in the marketplace. the third group were jr. cs students that were somewhere in between. meaning they had some development experience but were new to coding and maybe hadn’t seen .net before.

for each group of students we tried to identify what we could do to make that group a success. for the sr. students we thought it’d just be best for me to sit with them and answer all their questions. easy enough. for the business students we thought it would be great to teach them appmaker . we knew we needed something different for the jr. developers, but what? something that could take a little experience and turn it into a lot. then i remembered the awesome starter kits people like chris koening and danilo diaz had been creating and i put together a resources for new phone developers blog post that ended up getting used at baoc and other student events. one starter kit in particular really stood out to us, and that starter kit was the social viewer template by nick randolph . paul had recently started the basics of his just a fan apps on the social viewer template and social viewer had far more functionality than appmakr ever would. more importantly, we had access to the social viewer source. we knew we wanted to leverage it but we didn’t know how.

january ended up being a busy month. i reached out to nick randolph with the idea of creating a ui configuration tool for his social viewer template. the idea was to make social viewer as easy as appmakr. nick was very supportive and gave me access to everything i needed. but then things started to fall apart when i found out that our windows phone hackathon was going to be competing for students against an android hackathon scheduled at the same time. we decided it would be best to either lead the android event or follow it so that we weren’t competing. but the android event was scheduled for the third week of february and pushing ours out into march would be too late. it would have to be in early february, and to make matters worse, new rules were coming down that required the use of dev tools at our events (meaning appmakr would not be allowed). we did manage to get an exception for appmakr since the event was already scheduled, but we knew we needed a strategy that would be successful without it going forward.

on january 26th, paul, rick and i stood in front of a room full of cougar cs students at u of h. paul gave a presentation on the amount of money he’d made creating apps for windows phone and we talked about why having a smaller marketplace is actually better for developers.

we closed by announcing the windows phone hackathon and, thanks to deanna, $1,000.00 worth of amazon cards and 10 phones. we knew we could get more phones and cards, so we hinted that there would be something going on past the event too. all of the students seemed interested and even suggested we plan it for a full 24 hours . the three of us went home excited that night. rick created a flyer and i started work on a super secret project.

two weeks later appfactory was born and i let paul know what i’d been working on. 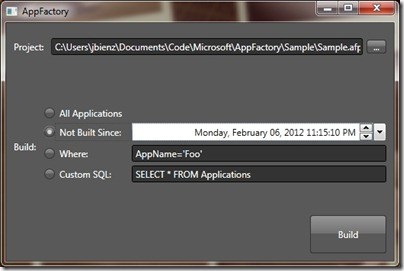 appfactory is, for all intents and purposes, a glorified msbuild script with a pretty front-end. it’s purpose in life is to take template projects (or starter kits) and turn them into factories of applications. paul had actually a simplified version of appfactory for his top music videos and “just a fan” suite of applications. paul wasn’t alone. anyone who’s built a company based on multiple applications on a similar codebase knows this problem. you start from a template, add custom logic, bring in your data, sprinkle in artwork, reconfigure services, build the solution, rinse and repeat. this problem has been solved before, but it’s always been solved uniquely for one project and never shared for others to use. and that, specifically, is what i wanted to fix with appfactory. i think paul was a little surprised and shocked to see appfactory, but he realized right away what it meant for him. it meant he could get out of managing his build process and focus specifically on the part he cared about – his ip. in less than 24 hours paul had completely replaced his custom build process with appfactory. 24 hours after that he had used appfactory to rebuild all 300 just a fan applications. appfactory would come back later to help with our event.

on february 10th, paul rick and i met for dinner on the u of h campus just before our hackathon. we had asian food, as seems to be our tradition, and we talked about how we thought the night would go. i personally expected about 25 students and i expected to lose half of them before the night was over. we knew we’d start with rick giving a presentation on appmakr and follow it up with paul giving an overview of the social viewer template. in a last minute stroke of genius we thought it would be cool for paul to use a football team as the subject for his social viewer talk. then, if we had time later, i could do a walkthrough of converting that to a suite of applications using appfactory. we didn’t discuss the number of apps we thought we’d end up with, but i remember thinking i’d be happy to get 30 or 40 by the time we were done.

at 6:00 pm we walked into a computer lab packed wall-to-wall with students. 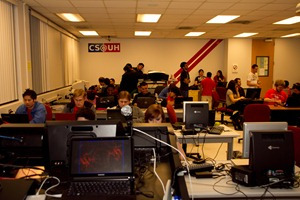 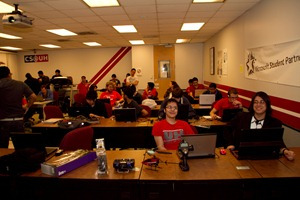 there were more than 50 people waiting to get started, and there were so many unexpected attendees that we had to overflow some of them into the next room.

because we had so many people that had never done windows phone or .net before, i started with a 20 minute overview of visual studio and expression blend. after running to the gas station to get us some ice, rick followed up with his presentation on appmakr. not long after that paul did his presentation on social viewer. it was awesome. 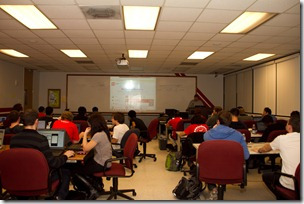 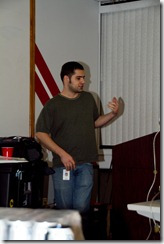 rick, being the rockstar promoter, got everyone hopped up on caffeine and within three hours we’d already given away our first phone. 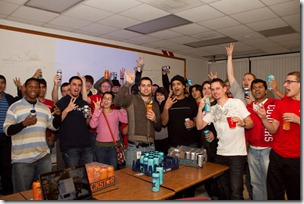 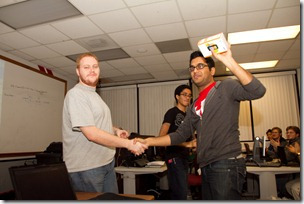 the second phone went about 30 minutes later and the pace just kept up like that the rest of the night. 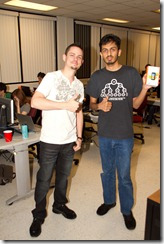 i knew a 24 hour event would be tough, even for college students hopped up on caffeine. luckily i had thought of that ahead of time and my awesome boss nathan approved budget for food and for an xbox. i brought my own copy of rock band and i also brought my own personal rc helicopters and rc trucks to drive around. together with some loud music between rock band sessions, these distractions proved to be just enough to keep everyone going all night long. though we did still lose probably 50% of the attendees at night, keeping 25 college students interested in anything for 24 hours is no small feat. 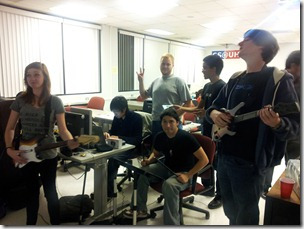 about an hour after that picture was taken i was given a special surprise. paul had been taking notes when he gave his social viewer presentation and he noticed a team of four guys were really paying attention. entirely on his own, and without me knowing it, paul sat down with that team and walked them through using appfactory to take his football sample and turn it into a suite of 32 applications for the nfl. those guys showed up with very little programming experience and left with $320, a phone for each of them and the start of a new business. it doesn’t get any better than that.

when 6:00 pm rolled around on saturday i was surprised at how lively everyone was; even me. i felt like i could have stayed a few more hours (and part of me really wanted to since apps were still getting submitted at a regular rate) but luckily i had just kicked of apptastic with u of h allowing students to continue submitting apps even after the event was over.

when i finally sat down and really looked at the spreadsheet i couldn’t believe my eyes. i checked and double-checked to make sure there wasn’t a copy-and-paste mistake. did we really make 169 apps in 24 hours? we did. not only that but i had created a column called ‘ is appmaker ’ to keep an eye on how we were doing with custom dev. out of 169 apps, 104 were custom code. that means that only 38% of the applications were appmakr. many of the students started with appmakr to get something done quickly and then moved on to custom code. lots of the appmakr apps were quality work too, like the recipes app and adventure time. 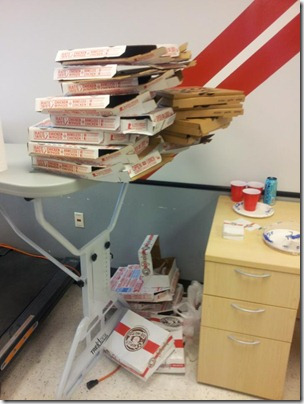