As part of the IT team working on GitKraken here at Axosoft, I’ve watched how the use of a really great Git client can add measurable value to a lot of the processes I use on a daily basis, where dev and IT converge.

While version control systems are traditionally associated with development, our operations team has been relying on GitKraken more and more to improve workflows and complete tasks faster with our dev team.

Here are 3 ways GitKraken is tearing down the walls that exist between development and IT teams.

1. The GUI is a Great Way for IT Pros to Git Their Feet Wet.

The GUI allows IT professionals to dip their toes into the world of Git without cannonballing into the pool. Even for IT professionals who have strong command line skills, Git can have a steep learning curve when first starting to use it. And as full-featured as Git is, some systems engineers may not want to (or need to) know every single detail to the degree that a developer may need.

The GitKraken client, with its intuitive interface, is a great way for IT pros to wade into the Git waters, providing a graphical representation of Git processes and concepts.

It allows them to start using Git quickly, gain familiarity, and most importantly, not blow things up with a single command.

Today, virtually all IT shops are comprised of a heterogeneous mix of *nix and Windows servers running any combination of back-end systems and services.

Just as often, the IT pros who design and support these systems work on various Windows/Linux/macOS workstations, depending on which religious IT sect they belong to.

Since GitKraken is cross-platform, working on scripts and infrastructure code while collaborating with people on other OSes and even in other departments is seamless, with everyone immediately feeling right at home in the same interface, whether you’re in development or IT.

3. A DevOps Process and Culture Is Facilitated.

The past few years have given rise to a DevOps culture in the IT and dev spaces, with good reason.

On the IT end of the equation, processes emphasizing infrastructure as code, automation platforms like Chef and Puppet, and using version control systems to maintain repositories of versioned infrastructure have enabled IT pros to reimagine the ways in which they manage and deploy their infrastructures using tools previously thought to be dev only.

Version control, in particular, has been a welcomed addition to my IT toolset.

Being in IT, it naturally pains me to give developers any credit, but true version control has vastly improved my coding workflow, especially when combined with GitKraken. Historically, SysAdmins have not exactly been known for their stellar version control methods.

Version control for an old-school SysAdmin usually looks something like this: 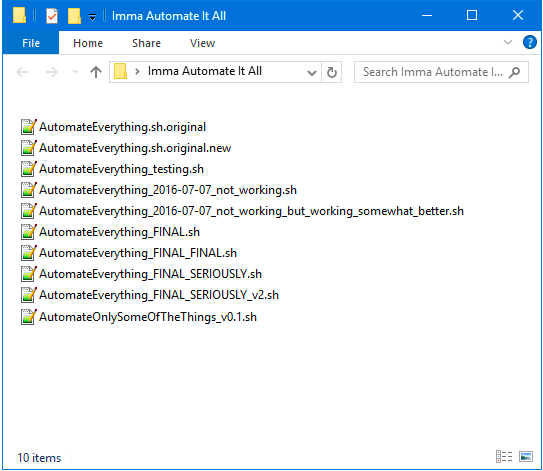 Version control according to a SysAdmin

But by using GitKraken, even with little to no Git experience, it becomes easy for an IT pro or department to put all of their scripts, configs, Chef recipes, dot files, and any other infrastructure code into Git repositories.

You can then version through them and manage your own code base using modern workflows that are in line with industry best practices. You can even unite both dev and IT assets and artifacts under one system.

In this way, the walls between dev and IT are lowered, processes are aligned, and the already common language between the two now has an even larger vocabulary to draw from.

And what the hell, you can even add to the repo those .bat files IT people still keep around because we insist that SOME DAY we just might need that kick-ass DOS boot disk we wrote back in 1998 that loads that cool ASCII art of Calvin peeing on a Novell NetWare logo.