Why should you virtualize your APIs? 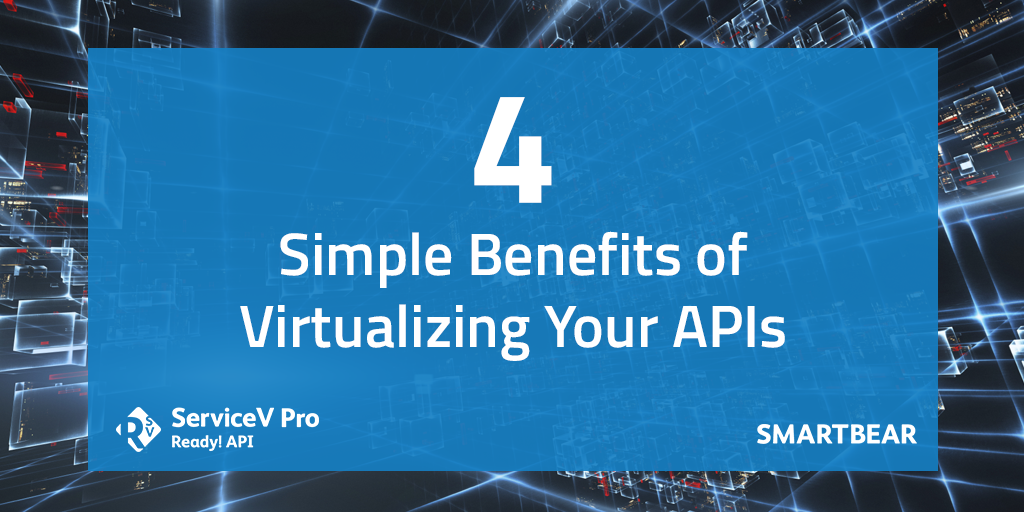 SmartBear Software recently conducted a survey of more than 2,300 software professionals, working in a variety of different roles in more than 50 industries, and found that ease of use, responsiveness/performance, and service reliability/uptime are the three most important characteristics organizations want in an API.

Virtualization can play a critical role in helping ensure the performance and reliability of your API.

And while many decisions your team will make about the tools and processes related to your APIs can be complicated, there are simple benefits to virtualizing your APIs that are hard to ignore.

Here are four to consider:

1. Get Ahead of Development

By virtualizing APIs that are still being developed, you can get ahead of the game by creating functional tests and/or performance tests against that API, so that you’ll be ready to hit the ground running as soon as the API is completed. By using a testing tool with an Environments feature, you’ll be able to quickly and easily swap between your virtual API and the production version.

Prototyping  an API that is still being developed will also allow you to test any dependent APIs and integrations that API supports, so that you can be ready for any bugs or issues that might arise with the new API when it becomes available.

If your API relies on third parties or dependencies to function, you can virtualize those APIs and therefor save money by not needing to make calls to the providers every time you perform a functional test, or hundreds (maybe even thousands) of times for a load test.  You can also ensure clarity of data/metrics in your testing using this method.

By removing APIs you do not control from the test and substituting virtual APIs, your metrics will only be based on data relating to your API calls. This can help simplify results and clarify any issues that exist with your API.

3. Control the Behavior of APIs You Don’t Own

If your API(s) are dependent on third parties or APIs outside of your control to deliver content or provide a service, you need to be prepared in the event that one of those APIs fails, responds slowly, or generates errors.  But if you don’t control those dependencies, how can you test your API against issues of that nature?

The answer is by virtualizing them. You can virtualize those dependent APIs and generate failures, slow response times, latency, congestion, and other factors that impact performance. That way, you’ll know how your API will handle those conditions and can optimize the response, put measures in place in that event, and be better prepared overall for when an API beyond your control experiences issues.

Virtualization can be a valuable way of providing a proof of concept to management or anyone else that needs to approve a project or allocate funds/development resources. By virtualizing the APIs you want to create, you can showcase a fully functional, visual representation of your API project that behaves very similarly to your end goal. That can be far more valuable than even the most comprehensive proposal.

By demonstrating your API as a live, fully functional model, you show its value without resorting to a lot of description, slides, or graphs. The concept will be able to speak for itself.

You can learn more about the benefits of virtualization and how to get started in our eBook, The Definitive Guide to REST and SOAP API Virtualization.

When you’re ready to get started, you can also try SmartBear’s API virtualization tool, ServiceV Pro for free. Learn more.