The retrospective is one of the four core ceremonies in scrum methodology. It helps scrum teams to understand what went well, what didn’t, and how to make the next sprint better in terms of people’s relationships, processes set, and tools used.

It’s such an integral part of scrum methodology that the 14th Annual State of Agile Report found that the retrospective is the second most practiced agile technique among agile executives, practitioners, and consultants.

Can this process that focuses on improving itself be improved? We think you can through OKR (Objective and Key Result) — a scalable goal alignment and tracking system. Continue reading this article to know the four ways that OKR can help to take your agile team retrospective to the next level.

The first step to fixing an issue is diagnosing it; only then can you roll out a targeted and strategic solution. So, we’ve listed the common sprint retrospective issues that plague agile teams in the sections below.

Some teams conduct a 1-hour retrospective for a 2-week sprint just because “that’s how it’s done in scrum,” which is not the right way to go. Not knowing what to discuss results in an unstructured and unproductive retrospective session.

When you don’t have a structured session, it affects your post-retrospective action items. Perhaps your team discussed several key issues and now it’s difficult to prioritize them for action and improvement. You and your team members may then end up not solving these issues, which leads to continued challenges in the next sprint.

Lack of Honest Engagement From Participants

A sprint retrospective without honest feedback is just a regular bull session. When people don’t bring up the real issues, there’s a false sign that everything’s good. Are you wondering why this happens? Maybe the retrospective format that you’re using is not eliciting adequate (and honest) feedback from the team. Or, maybe staff are unconvinced how discussing the problems can help them to deliver better value in upcoming sprints.

Take the three common issues stated above and throw the remote working situation into the mix. What you get is a thoroughly confusing retrospective session, especially when there are asynchronous collaboration and communication breakdowns.

Before you can use OKR for your agile teams to improve retrospectives,  you must first understand what it is. OKR is a scalable goal tracking system that can be traced back to Peter Drucker’s Management by Objectives (MBO) and further developed by Andy Grove. This framework then gained popularity when it was implemented at Google in 1999 by John Doerr.

There are six major components that make up the OKR system listed in the sections below.

The objective is a qualitative description of goals that motivate agile teams to do their best work in each sprint. There should only be a maximum of five objectives for each team.

To get the key result, quantitative metrics are used to measure if the goals are met. There should only be a maximum of five key results for each objective.

The initiative is known as the daily tasks, activities, or projects that help teams deliver the key results. For example, the tasks assigned to staff in each sprint can be regarded as initiatives.

Just like how the retrospective is used to better improve sprint cycles, period or cadence is the frequency of grading and evaluating OKRs before creating new ones.

OKR is usually graded on a scale of 0.0 to 1.0, with 1.0 being that a goal is fully achieved throughout its period.

Each objective must have an owner assigned to it as this fosters accountability, transparency, and proper alignment.

OKR can revamp agile team retrospective when implemented correctly. Learn how in the sub-sections below.

OKR is all about goal-setting/alignment and one of the best ways to do that is through bi-directional goal alignment. This means that management comes up with strategic company OKRs while teams then define tactical goals that contribute to company growth.

An example of bi-directional OKR alignment for a SaaS vendor (source).

Since OKR aligns you and your team, it’s easier to spot and discuss only pertinent issues that are in the way of achieving these goals. For example, if your team fails to deploy the self-serve product knowledge base, discuss why it happened and implement corrective actions to improve the following sprint. Bonus points if you can incorporate suitable retrospective formats (e.g., sailboat method, 5 whys method) to understand even better why some issues happened.

Prioritize Action Items Based on Shared OKRs Between Teams

Following a fruitful retrospective session, it’s normal to have a set of tangible improvements to work on. But, not everything can be tackled in the upcoming sprint. So, prioritize action items based on shared OKRs between teams and stage them across multiple sprints if necessary. Let’s say that the teams within the Customer Success Department failed to deliver the self-serve product knowledge base because of poor internal communication. They must then prioritize and work on this issue in the next sprint. Other low-priority problems can be moved to the following sprints.

Ownership begets accountability. Goal ownership is also a good way to encourage honest conversation between team members during retrospective sessions. Since individuals in a team have tactical objectives and initiatives they’re personally responsible for, they’ll be driven to discuss and find solutions to problems they’re facing.

The beauty of OKR is that it not only maps goals to measurable results, but it also aligns everyone to work together in the right direction and drives constant progress. This is what makes this goal-setting system a good method to bring distributed teams together during the retrospective. Bonus points if you can use an OKR tool that can be instantly incorporated into the team's existing work platform. For example, if your teams use Jira to do their daily tasks, install a Jira OKR app like OKR for Jira. From there, it’s easy to monitor the progress of Jira tickets linked to each objective and discuss how to improve them during retrospectives. 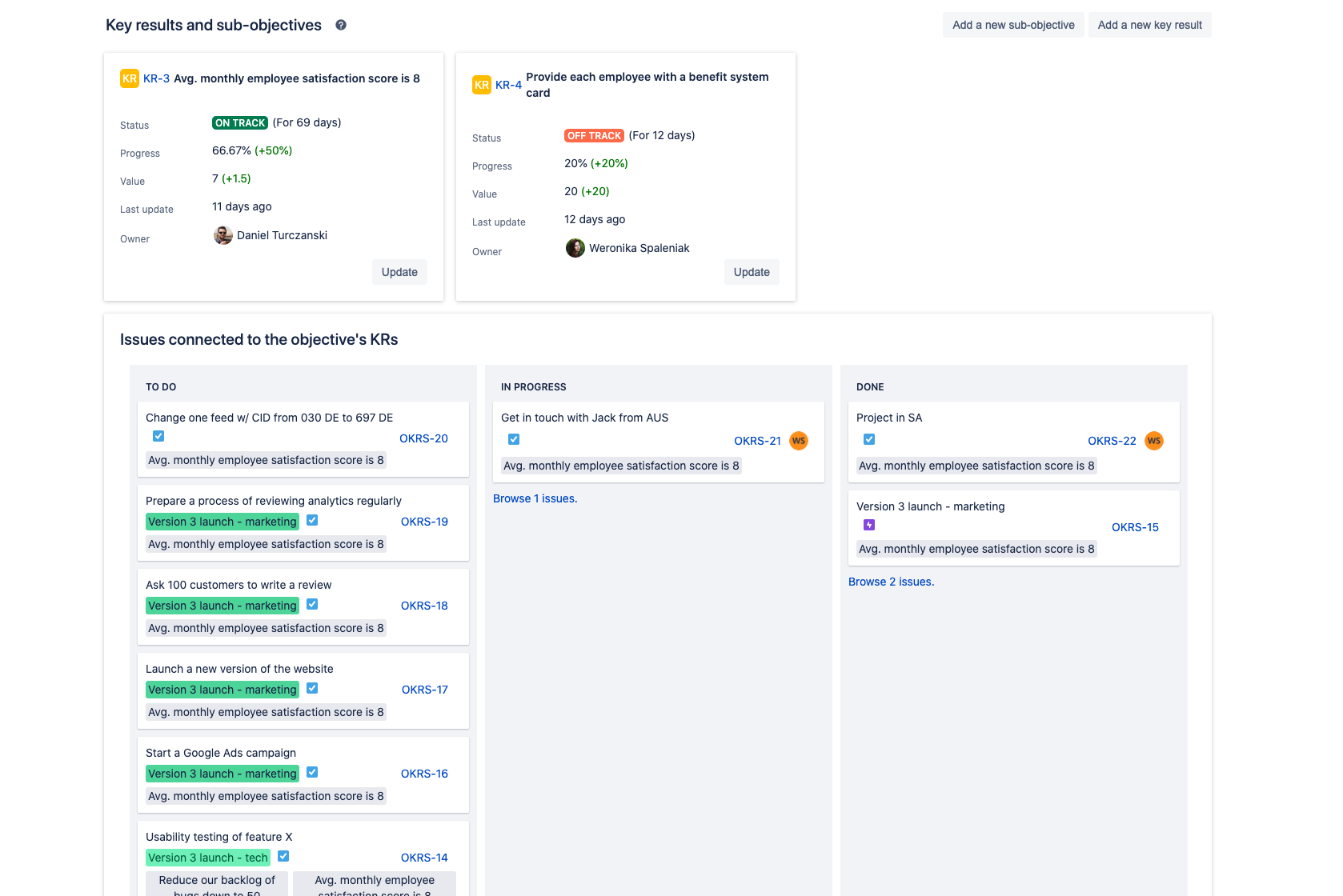 An example of a Jira OKR app—OKR for Jira—that allows you to easily monitor and improve the progress of issues and goals, even for distributed teams.

Sprint Towards Retrospective Success With OKR

It’s always good to consistently check in and see if your retrospective session is bringing a positive impact to your team and its deliverables. If you haven’t already, consider implementing a goal tracking system like OKR to ensure that everyone is measuring and improving the things that matter the most.