in the last few years, smartphones have continued to—quite literally—grow. the first iphone had a screen size of 3.5 inches and now, 9 years later, there are phones with a screen as big as 5.7 inches, like the samsung galaxy note 5.

as manufacturers continue to experiment with different screen sizes on both ends of the spectrum (take apple’s newest smaller screen iphone se for example), we decided to investigate how engagement differs across small and large screens. 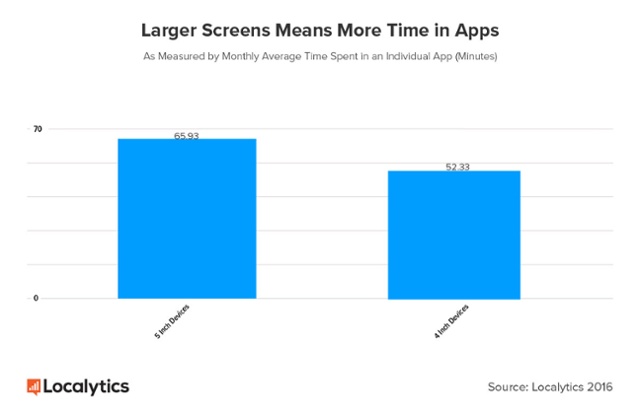 people spend almost 66 minutes in each individual app per month on five-inch screens, compared to 52 minutes a month in each app on four-inch devices.

what exactly makes up this difference? the gap exists because users launch apps 21% more on five-inch devices than on four-inch devices. the larger screens have improved the mobile experience in many ways, and users seem to be taking advantage by visiting apps on these devices more often.

five-inch devices also have a 3.53% higher average session length than four-inch devices. this is likely because larger screens make watching videos, reading, and playing games much more enjoyable; all of which can be time-consuming activities.

iphone se: too early to tell if it meets people’s device needs

looking at the engagement of apple’s newest phone, the iphone se, it would be easy to see this new model as an outlier. when it comes to time in-app, the iphone se is lagging behind similar sized models: the iphone 5, iphone 5s, and iphone 5c, and the samsung galaxy s4 mini. 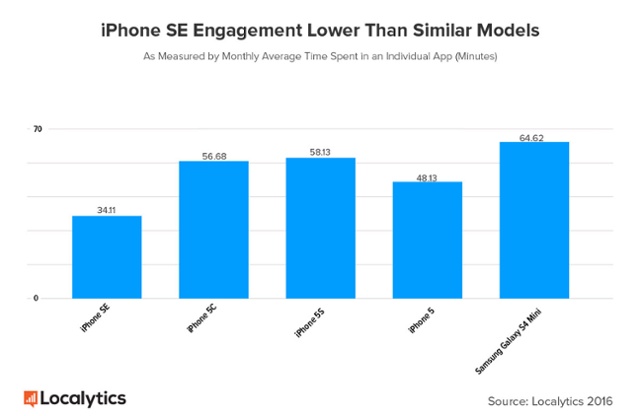 people spend only 34 minutes per month in an app on the se, the lowest time in-app of all the four-inch models, such as the iphone 5 and samsung galaxy s4 mini.

with the phone being on the market for less than one month, it is simply too soon to tell. users are likely still experimenting with the iphone se, trying out their apps and finding out which ones work best on the smaller screen, which impacts the model’s overall time in-app.

is screen size the only consideration?

as you can see from the above data, the samsung galaxy s4 mini has a drastically higher time in-app than the other four inch models. in fact, this is consistent across all screen sizes: our research shows that app engagement is higher on samsung devices than apple devices. samsung users average 22.9% more time in apps than apple users. 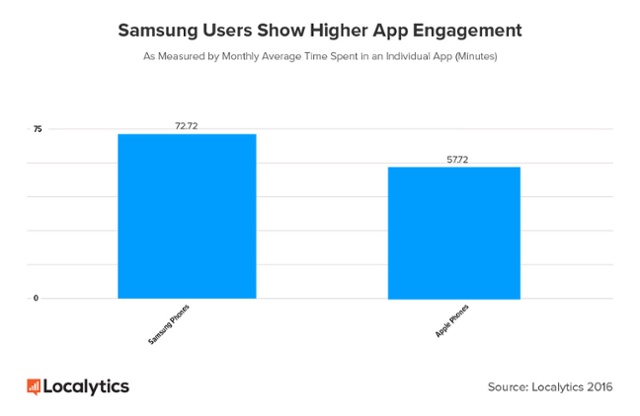 people spend 72 minutes per month per app on samsung devices, compared to 57 minutes on apple devices.

as it turns out, it’s not the device manufacturer that creates the engagement difference in apps; it’s the underlying operating system. our data shows that overall, android phone users spend 29% more time in-app on their devices than ios users, largely because the average number of app launches per month is 15% more for android users.

know your mobile could provide us with the answer to why that gap exists. author michael grothaus writes, “android [...] is more geared towards power-users and is infinitely more customisable -- you can change almost everything about it and customise to your exact specifications.”

this level of customization and power-user angle suggests that android users are encouraged to go deeper with the personalization of their app-consumption habits, leading them to be more engaged.

while there is a temptation to treat all smartphones alike when it comes to developing an app strategy, it is important to see that engagement differs by screen size. and this is likely due to the fact that the app experience itself is stronger on the larger screen phones, rather than the fact that the larger phones offer more or different features. to no one’s surprise, the power of the supporting underlying operating system also impacts the app experience.

as gartner points out, “smartphones and their myriad individual features will become less important in the future as consumers continue to find that the devices are becoming commodities while the apps that run on them bring more value to their lives,” (market trends: device and app fusion creates opportunities in personal technologies).

to combat this, a segmentation strategy is needed. with hundreds of device options, it is easy to be overwhelmed, but with a little data into which device models drive the majority of app experiences, app owners can create the best experience for their users—a necessity in the midst of today’s mobile engagement crisis .