Most of us have already started developing for WinRT, so it make sense to have a better understanding of the runtime:

1) WinRT is a new collection of COM objects, native to Windows

Some quick points about WinRT:

2) WinRT is not exactly your mama’s COM

You don’t need to work with the crappy old COM style, even while developing applications in C++. WinRT provides a higher level of abstraction, based on COM. Win RT implements multiple features on top of COM, including

3) WinRT can be accessed from multiple languages/platforms

In short, you can ‘project’ WinRT to multiple languages. The language run time will take care of the Garbage collection implementation. All WinRT components implement IInspectible interface for projecting itself to other language environments.

4) Though WinRT is unmanaged, it has metadata

You might be thinking, if WinRT is so unmanaged, how we can call into WinRT from other environments, especially from the managed world without old techniques like P/Invoke?. In fact, Windows Runtime libraries are exposed using API metadata stored in .winmd files. You could find the winmd metadata corresponding to the WinRT libraries.

As the metadata format is similar to the .NET format, you can open a .winmd file in ILDASM and explore, like this. 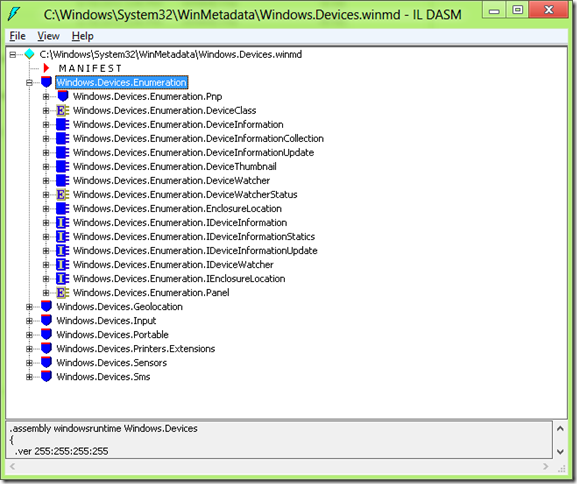 As mentioned, a projection is a way of expressing WinRT in a specific language. You may also create WinRT components in one language, and may consume the same from another (because the metadata is available).

Presently, these are the projections available:

Using the C++/CX (Component Extensions) which does compile time bindings and compiles the code to a native image. As WinRT is fully native, applications developed using C++ doesn’t need CLR/.NET to compile/run WinRT applications. C++/CX is a set of extensions from Microsoft for developing for WinRT (much like C++/CL was for developing CLR/.NET apps in C++).

CLR is modified to support WinRT access from the managed world.

When you develop for WinRT in C#/XAML, you’ll notice multiple things.

Javascript projections are probably the most abstract and highest level projections for developing WinRT applications. How ever, you can’t create WinRT Components in Javascript. Also, you can’t use WinRT’s XAML library in/from JavaScript as of now. How ever, the advantage is if you are using Javascript, you could also leverage the HTML5 features for developing your applications. You can use the WinJS scripts and CSS files from Microsoft to provide the ‘metro-style’ look and feel.