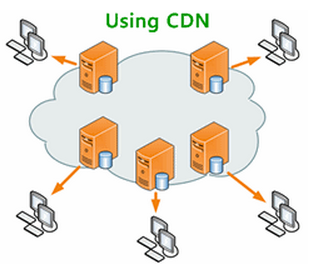 by now, we’re all familiar with the adage that “content is king” on the interwebs. that still may be the case — but even a king has limits. as internet users, our collective impatience seems to grow more acute with each passing month. few of us tolerate even a few seconds of delay when we’re online. so no matter how irresistible your content may be, it won’t gain traction if your site takes too long to load.

so what’s a developer to do? if haven’t already considered it, you might want to think about implementing a content deliver network (cdn) for your site. here are a few reasons why:

1.) performance
the most obvious benefit of a cdn is greater speed. because data is cached on edge servers and content requests are directed to the closest or most optimal network node, a cdn sends your data along the shortest (or most timely) route to the user. this reduces latency and packet loss, allowing for faster load times as well as improved streaming quality — which generally results in more page views.

2.) reliability
with your content delivered via a cdn, all your assets are dynamically distributed across multiple servers, so outages in one region or issues with a single hardware node won’t sabotage the entire system. even if you’re faced with a dos attack, the distributed infrastructure can neutralize the impact and keep your availability at 100%.

3.) scalability
as your content increases in popularity, you need to be prepared for inevitable bursts in traffic. once again, allowing your data to be distributed across a cdn makes scalability one more thing you don’t have to worry about. giving your content a larger number of servers for delivery results in greater network backbone capacity, making it much easier to handle unexpected surges in new users.

4.) cost savings
of course, the other advantage of having more servers is that the load imposed on each one diminishes. additionally, implementing a cdn reduces the burden on your backbone network by offloading traffic to its edge servers. so while you’ll obviously have to factor the cost of a cdn into your budget, it’s likely to be vastly lower than the expense of adding new hardware — which you’ll no longer need for managing content delivery.

5.) search rankings
if the previous four benefits don’t give you enough reason to enhance your site with a cdn (and we’re guessing they do), consider this added bonus: google and other major search engines factor page load time into their ranking formulas. by boosting your page load and downloading speeds, you’ll be improving your position in search results and driving additional traffic to your site.

we’ll leave you with one final thought. on top of these five resounding reasons to improve site performance with a cdn, integrated usage analytics will give you additional visibility and control over the way data is handled — allowing you to continuously optimize content delivery. you’ve already got the goods. now it’s time to improve the experience, while strengthening your infrastructure at the same time.