We are currently witnessing a growing number of IoT deployments and solutions around the world. IoT security is emerging as a key component of these deployments and companies are recognizing they need to get it right from the beginning – By 2022, the IoT security market is forecast to reach $4.4 billion. Various industry surveys, as well as our own research, indicate cybersecurity is the #1 concern for industrial IoT users today.

IoT Security is key for the secure development and secure operation of scalable IoT applications and services that connect the real and virtual worlds between objects, systems, and people. However, as our recent 3-part introductory series on Understanding IoT Security shows, IoT security is complex and the market landscape is largely fragmented with a host of vendors competing to address the opportunity.

In this article, we turn our focus to expand on 5 IoT Security insights gathered from our ongoing market research: 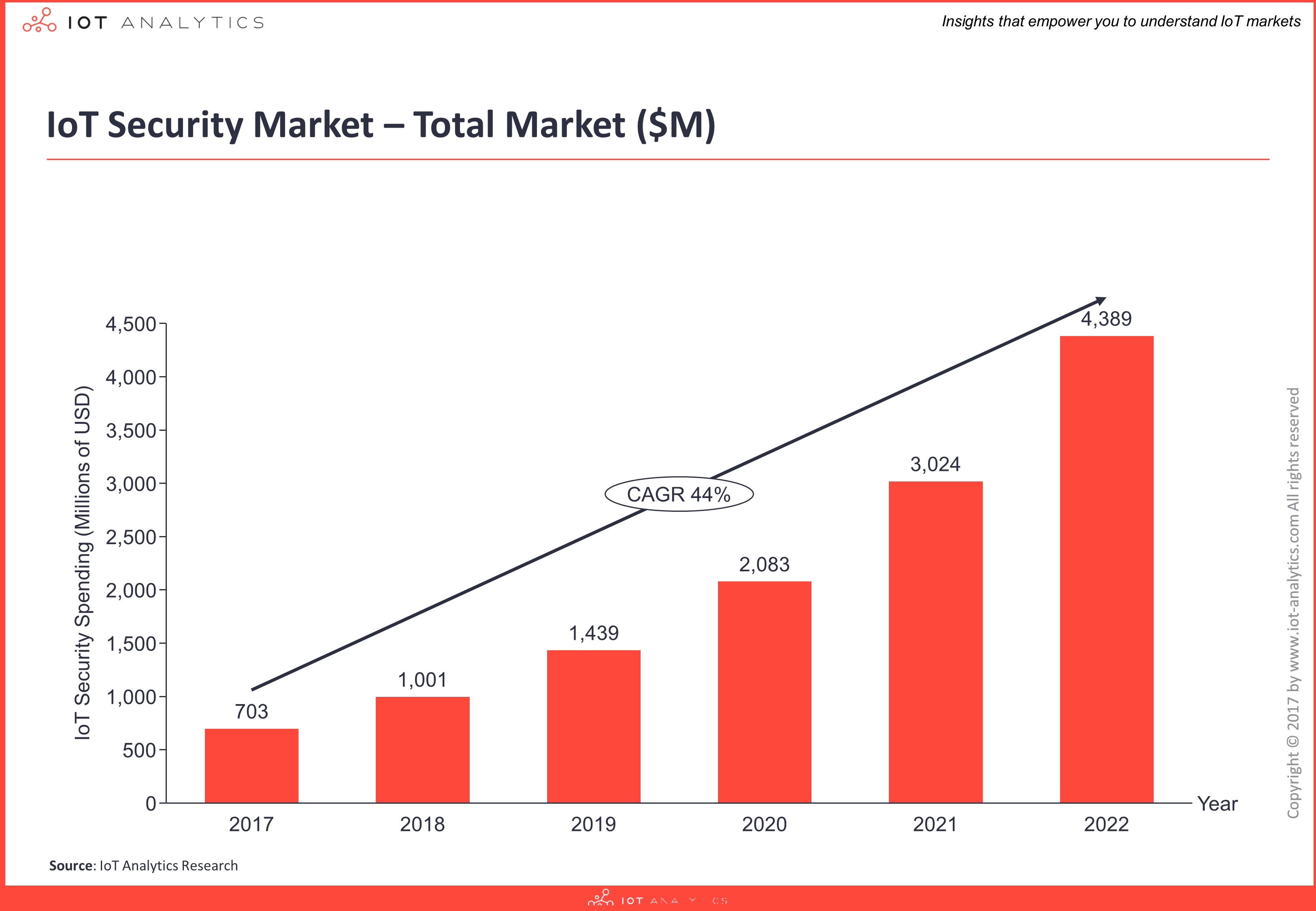 Global spending for end-users of 3rd party security solutions is currently estimated at $703M for 2017 and is forecast to grow at a CAGR of 44% to become a $4.4B market by 2022, driven by new regulation and increasing IoT adoption.

In addition to the security tools provided by IoT platforms (which is not part of this figure) the IoT security market is an aggregation of innovative startups and established firms such as global chip manufacturers, infrastructure providers, as well as cloud and enterprise software companies. There are at least 150 independent IoT security vendors addressing the challenges across all industries – of which Industrial/Manufacturing is the biggest segment for IoT security.

Example: A large auto OEM we talked to recently performed an assessment of factory vulnerabilities and concluded that there were significant gaps in today’s infrastructure. They expect to increase related spending significantly.

One of the big differences between the Internet of Things and previous internet technology is that the number of possible threats is much larger, due to the following (based on the above equation for the level of cybersecurity risk from Bosch):

Example: A large industrial components manufacturer we recently talked to is now connecting legacy equipment on the shop floor to the internet to enable condition monitoring and predictive maintenance solutions. They concluded that by connecting the operational technology (OT) system and the information technology (IT) system – which were previously operating on two separate Wi-Fi networks within the same building – it creates new points of exposure that can be attacked. In particular, they noted that compromised 3rd party applications (i.e., from maintenance/service providers) could act as an entry point to the network and be taken advantage of to access other connected systems and bring production to a standstill. IoT solution architectures require multi-layered security approaches that seamlessly work together to provide complete end-to-end security from device to cloud and everything in between throughout the lifecycle of the solution. The 4 layers consist of:

With forecasted growth to billions of IoT devices, manually handling security tasks (e.g., revoking certificates, isolating compromised devices), as is still the case in many solutions today, will not be feasible. Security automation techniques that merge security solutions and artificial intelligence are becoming more and more prevalent.

For example, next-generation activity monitoring enables advanced anomaly detection, building on sophisticated machine learning algorithms. One case includes objectively classifying ‘good’ files from ‘bad’ files based on mathematical risk factors, which means it becomes possible to teach a machine to make the appropriate decisions on these files in real time. This method drives autonomous decision making and changes the way an IoT device understands, categorizes, and controls the execution of every file.

Example: Their approach begins with the collection of a massive amount of data, from which they identify a broad possible set of attributes for a file. Converting these attributes to numerical values means they can be used in mathematical models. Vectorization and machine learning are applied to these models to eliminate the human impurities and speed up analytical processing. Mathematicians then develop statistical models that accurately predict whether a file is valid or malicious enabling them to discover and quarantine threats at the endpoint.

5. Cyberespionage Groups and Petty Criminals Are the Most Common IoT Attackers 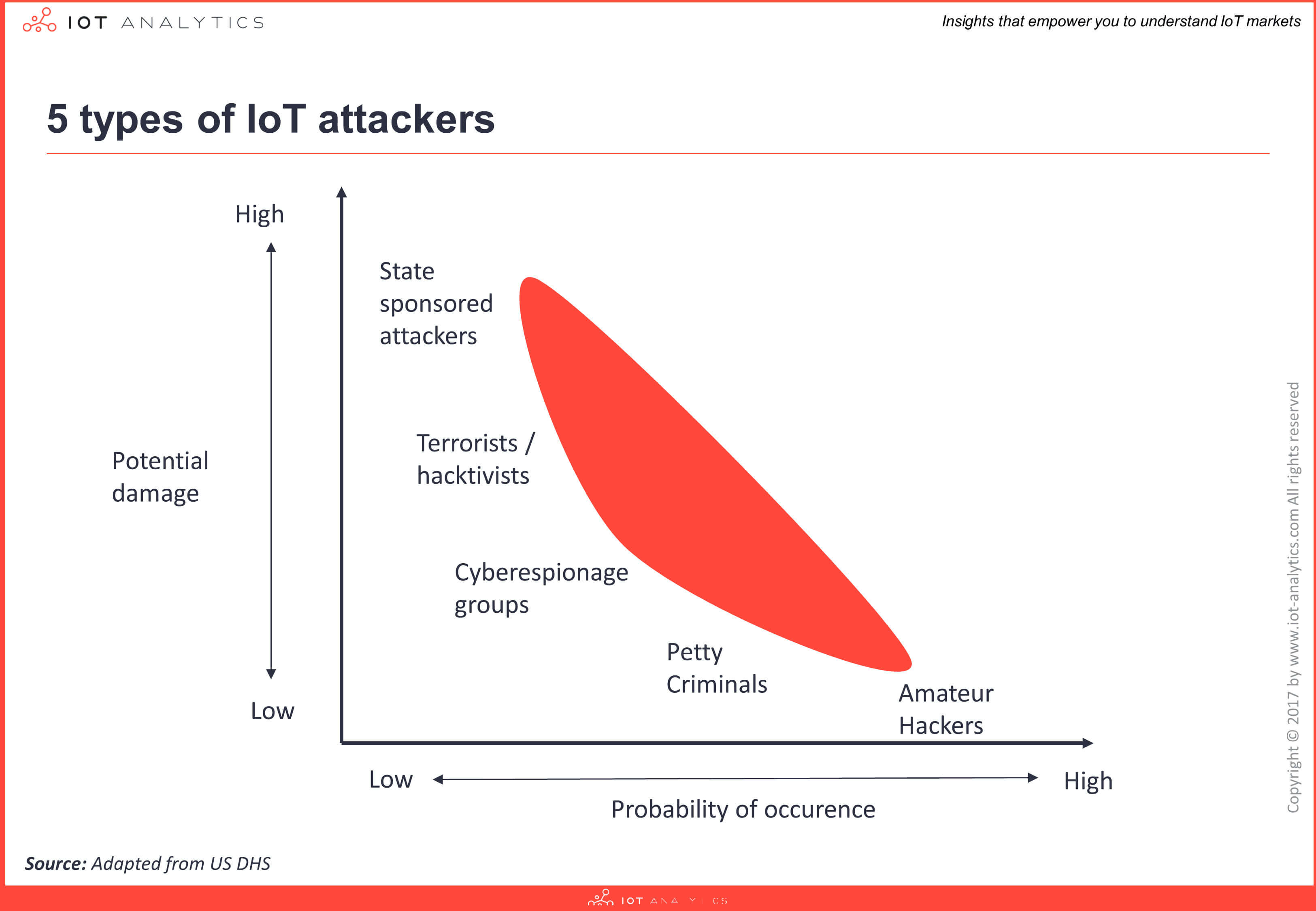 The five main types of IoT attackers today are:

Each class of attacker may have different abilities, capabilities, and goals – whether on an individual or group basis (i.e., aggregating resources to work together). Given the same tool different classes of attackers may achieve different outcomes e.g., experienced cyber criminals can evade deep packet inspection tools or IDS signature detection tools whereas new hobbyists may not.

However, cyberespionage groups with vast resources and highly skilled petty criminals are the most common type of IoT attacker. In many cases, they have developed advanced malware with the ability to mutate and evade detection for longer on IoT networks or they leverage DDoS attacks as a means for blackmail.

Example: Armada Collective is an example of a traditional cyberespionage group that has recently demanded that businesses pay thousands of dollars (predominantly in Bitcoins or via PayPal) or run the risk of having their services brought down by crippling cyber-attacks. Although the actual members of the original Armada Collective appear to be locked up in a European jail, some enterprising individuals that are financially motivated are continuing to use the group’s name for extortion.

IoT Analytics continuously publishes research on “IoT Security”. You may be interested in the following additional resources:

Also part of our “5 Things” – series: 5 Things to Know About IoT Platforms