author and devops guru gene kim spent more than five years of intense research on the devops handbook . along with co-authors jez humble , patrick debois, and john willis, gene offers real-world examples and advice on how to maximize the power of devops.

currently the organizer of the devops enterprise summit , gene is probably best known for founding tripwire back in 1997 and for co-writing the seminal book the phoenix project: a novel about it . gene’s latest journey deep into the devops movement cemented his long-held conviction that companies looking to go from good to great should get in on the devops action—and fast.

at our latest futuretalk in portland, oregon, gene shared some of his most surprising findings, offering fascinating proof (via real-world case studies) of the power of devops to transform not just engineering practices but the enterprise as a whole. ultimately, he said, the goal of devops should be to make all 16 million of the world’s engineers as efficient and effective as those working at companies like facebook or google.

here are just a few of his surprising findings:

surprise #1: the business value of devops is even higher than we thought [time code 1:58]

companies that practice devops outperform those that don’t. this, gene said, was not necessarily shocking, but what did blow him away was the sheer magnitude of that outperformance. compared with their low-performing peers, the top devops-embracing organizations are 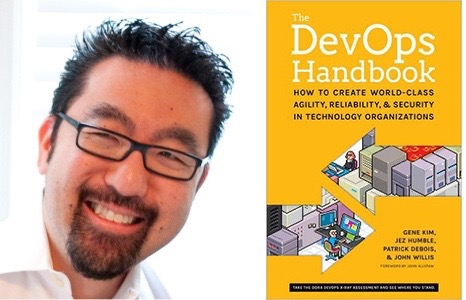 even more amazingly, these organizations are twice as likely to exceed profitability, market share, and productivity goals, and they enjoy 50% higher market capitalization growth over three years. as if that wasn’t enough, these organizations are also winning big in the labor marketplace, enjoying employee net promoter scores that are 2.2x higher than companies that don’t follow a devops model.

drilling down into this data, gene found a particularly telling correlation. when low performers add more developers to their teams, the number of deployments per day goes down. but when high performers (devops shops) do the same, their rate of deployments increases .

“with the right architecture, the right cultural norms, and the right technical practices, we can actually scale developer productivity linearly as we increase the number of developers,” said gene.

quoting nathan shimek , an engineering manager at new context who had to work even on the day his son was born, gene said that ops has long needed to be made “more humane.” after all, even night owls hate getting paged at 2 a.m.

the truth is, hastily fixing defects in someone else’s code is neither efficient nor particularly satisfying. citing the famous case study about the rollout of facebook chat as an example, gene showed how devs testing in production isn’t always as crazy as he once thought it was. for one thing, developers are often faster at fixing their own glitches. and many devs find great satisfaction in taking responsibility for their code all the way through to deployment and even fixing problems when they occur in production.

in other words, devops “brings the joy back to development work,” lessens sleep deprivation for ops, and generally improves relations between two breeds of engineer who have far more in common than the silos of old would suggest.

to hear the rest of gene’s surprises, including #6: devops is for unicorns and horses , watch his full futuretalk in the video below: