There is no doubt that Java is one of the programming languages that is most in demand these days. Here, we have scooped a handful of good info about trending frameworks that ease everyday lives of software developers around the globe.

As per a survey conducted by RebelLabs, the media ally for the online Java User Group (Virtual JUG), the lineup of best java frameworks for 2016 is the following: 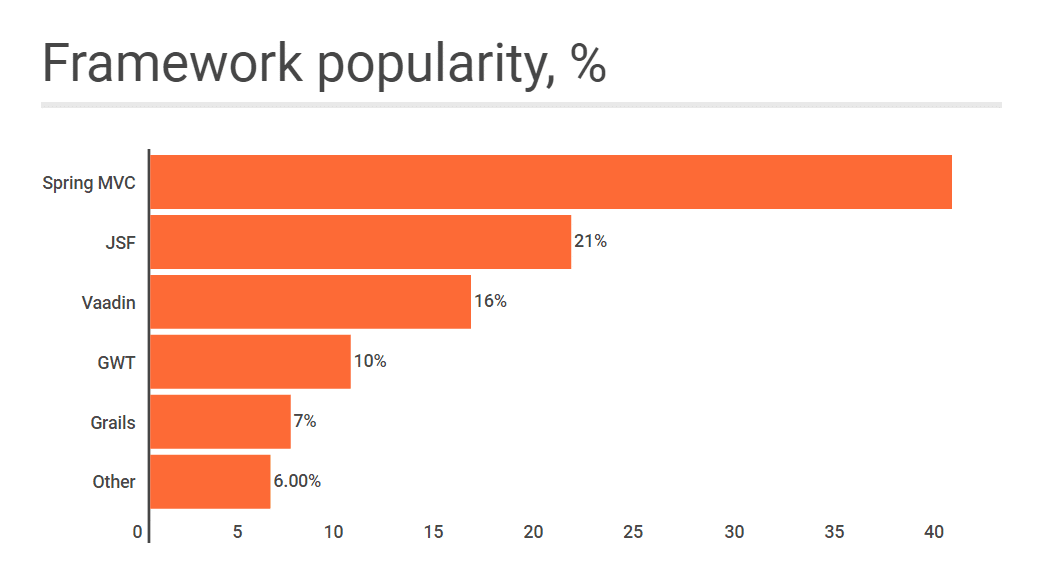 We will not push you or make you jump to conclusions just based on the comparison chart below, but we'll present you with the overview of each concept, letting you analyze and contrast the differences and pick the perfect match depending on your project.

Old but gold, Spring MVC is still ahead of the curve after more than a decade since its first release. After its expansion to embrace complete MVC framework, Spring kept on evolving adopting changes and turned into a full-scale Java framework for Internet-facing applications, offering software engineers a powerful toolkit for web application development and application configuration as well as for security projects. Being one of the most favored among programmers, Spring has a well-developed ecosystem, offering a variety of add-ons to choose from: REST APIs or SOAP web services, security (authentication and authorization, encryption), etc. Another benefit of this choice is that a big company of fellow developers who chose to use this particular Java framework, too. Thus, they are ready to give you a helping hand with any query you might have.

Spring is not nesting in the top of the charts without reason. It is one of the best and most well-known Java frameworks because of:

Although not a direct framework downside, regardless of the piles of reference documentation, Spring MVC might be more than newbie Java devs can chew, making the learning curve too steep. Thus, dealing with some parts of this Java framework can be tough for if you bump into a poorly documented chunk of references. The info you find might be different across versions.
By the way, due to our engineers' great experience, Spring MVC is one of our most fancied frameworks.

To elaborate even more on existing Java frameworks that are widely used by modern software engineers, we decided to refer to the successor of Apache’s Struts 1, Struts 2. This Java framework is quite a find for engineers who work with building contemporary Java EE web apps. The Apache Software Foundation has equipped developers with an extensive tool for creating enterprise-ready, web-facing applications, optimizing the development process from the beginning to the final point and post-go-live maintenance. This concept is the right choice if you sweat over high-load systems such as broadcasting portals.

When you ask yourself why you should consider Struts 2, consider the luxury of not having to override or implement the Action class – it is already in place! Repetitive setup code that IT engineers need to create for several actions is no longer a concern because Interceptors take care of it.

However, you might get turned off by the weight of this Java framework: some programmers find it’s not agile enough to go for.

Although not on RebelLabs’ list either, it is worth mentioning Hibernate when debating the best Java framework. This mapping Java framework cracks object-relational impedance mismatch issues by substituting persisting DB accesses high-level object handling functions. With every enterprise application being one of a kind, Hibernate is equipped with a great feature suite that helps backend developers fine-tune data access layer. This is an advanced ORM framework that lets you perform the database operation on Java objects (entities). It is a persistence concept that utilizes Hibernate cache to persist the data from the Java environment to the database.

Hibernate allows you to communicate with any database using tiny alterations in the code you write, bridging the gap between objects and relational words. On top of that:

Despite its obvious advantages, Hibernate does not permit multiple inserts, not allowing some queries that JDBC does. In addition, this Java framework might not be a good idea for small-scale projects that have fewer tables.

Being a part of Java EE, JavaServer Faces is supported by Oracle. Although this one is not the best frameworks for speedy Java development, it is easy to utilize because of great documentation provided by Oracle. Additionally, until you leave the Java EE environment, JSF has no external dependencies, but plenty of capabilities instead. Rich libraries and tools (including a toolset for easy user interface creation) become a magic wand that can back you up no matter how complex the application might seem.

As mentioned, JSF is an integral part of Java EE. Thus, developers draw on an IDE software suite as well as a prime level of support from an industry-leading vendor.

On the contrary, JavaServer Faces is too vast to easily comprehend for those whose prior experience and skills in web development basics are not solid enough.

Using GWT for rendering the end web page, Vaadin became one of the uber popular frameworks modern developers choose when creating applications for business. Utilizing a well-known component-based approach, Vaadin takes the burden off developer’s shoulder by communicating the changes made to the browser. An extensive set of UI components, along with varied widgets and controls, allows programmers to build cool applications in no time.

Building layout in Java, HTML or both, Vaadin gives an opportunity to bind data using either MVC or MVP. Drag and drop support along with other outstanding features simplifies the creation of single-page UIs for Java applications.

On the downside, a sluggish UI for a mobile app can be a concern since Vaadin sends back every event to the server. 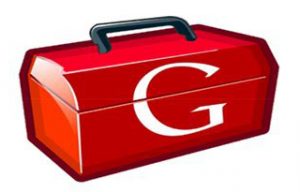 With Google Web Toolkit, you get single code base (both browser- and server-side programming in Java) that eases up the development and debugging processes. Simple integration with other technologies allows programmers embed GWT widgets in web pages. Custom widget capability is another benefit that can be created with the help of GWT.

However, if you are a web designer, GWT might be not the best Java framework to opt for; it is not amiable to those favoring plain HTML and late dynamic content placement. 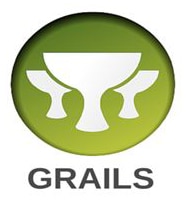 This particular web framework is regarded as a dynamic tool enhancing engineers’ productivity due to its opinionated APIs, sensible defaults, as well as its convention-over-configuration paradigm. Seamless Java integration makes this particular framework one of the top choices for plenty of programmers worldwide. A suite of powerful features, such as Spring-powered dependency injection and varied plug-ins, offer everything needed to create modern web-based apps.

Speedy setup of a new project and scaffolding saves a lot of precious time for coders. A huge library offers more than 900 of different easy-to-install plug-ins. Despite the beauty of Grails, a full-stack development Java framework, it has a bulky functionality covered by Grails’ Object Relational Mapping, making it a relatively heavy piece of software.

So What to Choose?

Choosing the suitable concept among such a variety of popular Java frameworks for 2016 can be a cumbersome task, as each company sticks to its own ideas on web-based and mobile app creation while selecting the winning approach. No matter which exact framework you go for, bear in mind the license, ease of installation, how active the network is, and documentation at hand, etc. Depending on the project type, sometimes, it is wise to have all the tools under one roof shaking things up, but quite often it makes more sense to trim the fat and go for a lightweight concept instead.

Another question to ask is whether your busy teammates are up for some learning and have spare time to allocate to knowledge crunch. Often times it’s worth to simply hand over your development to a remote team and get back a product ready for monetization. Stay tuned and happy development!

Published at DZone with permission of Nataliia Bubniuk. See the original article here.