Python is a favorite among many developers for its strong emphasis on readability and efficiency, especially when compared to other languages like Java, PHP, and C++.

Sure, it’s old, but it’s 1980s old — not Cobol or Fortran old. Besides, if something works, why change it (especially when there are so many ways to improve it)?

Actually, depending on how you view it, longevity is a good thing in itself — a sign of stability and reliability.

If you’re like many people who first started out with Java, C, or Perl, the learning curve for Python is practically nonexistent. But the fact that it’s easy to learn is also the reason why some people don’t see Python as a necessary programming skill.

I’ll be honest with you, my love of Python didn’t really develop until a few years ago. It took a long career of painful lessons to appreciate everything this language and platform have to offer. My goal with this short post is to save you the same pain and convince you why Python is something you need to know.

1. Python Is Easy to Learn

Well, at least it’s “easier” compared to many of the other programming languages available to you. There isn’t a lot of ceremony to Python’s syntax, which makes it readable even when you’re not a Python expert. My experience is that learning and teaching Python through examples is easier than approaching, say, Ruby or Perl the same way, since the syntax of Python has far fewer rules and special cases. The focus isn’t on language intricacies; it’s on what you want to accomplish with your code.

2. Python Is a Language of Choice

Python is a general-purpose, interpreted, interactive, object-oriented, and high-level programming language. Currently, Python is the most popular language in IT. Python was adopted as a language of choice for almost all the domains in IT including web development, cloud computing (AWS, OpenStack, VMware, Google Cloud, etc.), infrastructure automation, software testing, mobile testing, Big Data and Hadoop, data science, etc.

Python is a quick study for anyone. With practice, you can easily build a rudimentary game in two days, tops (and that’s after knowing absolutely nothing about programming).

Another factor that makes Python an attractive programming language for novices is its readability and efficiency. 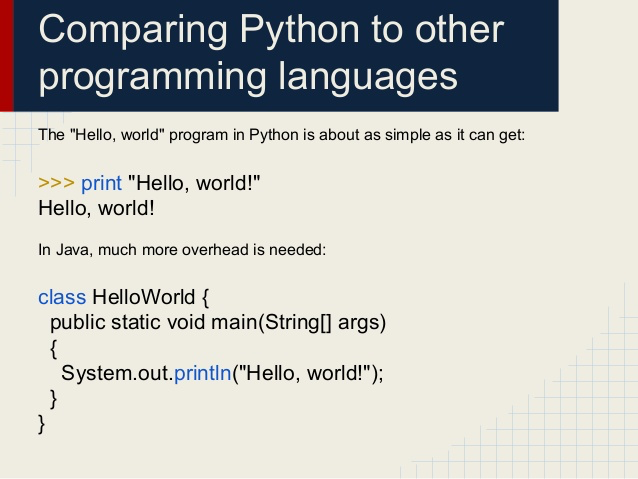 4. Python Is a Versatile Language and Platform

Python will be 28 years old in 2017. Even though that’s older than many of my readers, it remains highly relevant because it can be applied to pretty much any software development or operations scenario you can find today. Managing local or cloud infrastructure? Python applies. Developing websites? Yep, it applies there too. Need to work against a SQL database? It does that. Need a custom function for Hive or Pig? Covered. Just building a small tool for yourself? Python’s simplicity makes it a great choice. Need a language that supports the rigor of object-oriented design? Python’s features make it relevant here, too. In short, investing a little effort into learning Python will give you skills that apply across a wide range of job roles.

5. Python Has One of the Most Mature Package Libraries

Once you know the language, you can leverage the platform. Python is backed by PyPI (pronounced Pie-Pie and perusable online here), which is a repository of more than 85,000 Python modules and scripts that you can use immediately. These modules deliver prepackaged functionality to your local Python environment and solve problems as diverse as working with databases, implementing computer vision, executing advanced data analytics such as sentiment analysis, or building RESTful web services.

6. Python Is a Commonly Used Language in Data Science

Whatever job you’re reaching for, data will be a part of it. IT ops, software development, marketing, etc. — they’re all drowning in data and thirsting for wisdom. Soon data analytics skills will be as necessary as coding skills, and Python has a strong presence in both areas. Next to the language R, Python is the most used language in modern data science; in fact, Python job postings outnumber R postings in the data science arena. The skills you develop learning Python will transfer directly to building these analytics skills.

7. Python Is Cross-Platform and Open Source

Python’s been running cross-platform and open source for more than 20 years. If you need code that works on Linux, Windows, and MacOS, Python provides. Moreover, it’s backed by decades of bug-squashing and kink-straightening to ensure that your code works as intended wherever you run it.

There are several robust Python implementations integrated with other programming languages.

There aren’t a lot of languages that can offer the versatility and simplicity of Python; there are even fewer that can do so alongside decades of thought, effort, and community that has gone into Python. Whether you’re new to code or a script-spewing guru, Python is something you need to know.

Published at DZone with permission of Venkatesan Murugan. See the original article here.