The venerable HyperText Transfer Protocol, or HTTP, standard has now been updated. The HTTP/2 standard was approved in May 2015 and is now being implemented in browsers and web servers (including NGINX Plus and the open source NGINX software). HTTP/2 is currently supported by nearly two-thirds of all web browsers in use, and the proportion grows by several percentage points per month.

HTTP/2 is built on Google’s SPDY protocol, and SPDY is still an option until support for it in Google’s Chrome browser ends in early 2016. NGINX was a pioneering supporter of SPDY and is now playing the same role with HTTP/2. We’ve published a detailed white paper (PDF) to describe HTTP/2, show how it builds on SPDY, and demonstrate how to implement the new protocol.

The key features of HTTP/2 are the same as SPDY:

Now you need to decide whether to move forward with HTTP/2 – and part of that is knowing how to get the most out of it. This blog post will guide you through the performance-related aspects of the decision-making and implementation process. Check out these 7 tips for HTTP/2 performance:

Note: Neither SPDY nor HTTP/2 requires TLS, strictly speaking, but both are mainly beneficial when used with SSL/TLS, and browsers only support SPDY or HTTP/2 when SSL/TLS is in use.

Implementing HTTP/2 is easy, as our white paper describes (PDF). However, HTTP/2 is not a magic bullet; it’s useful for some web applications, less so for others.

Using HTTP/2 is likely to improve website performance if you’re using SSL/TLS (referred to as TLS from here on). But if you have not, you’ll need to add TLS support before you can use HTTP/2. In that case, expect the performance penalty from using TLS to be roughly offset by the performance benefit of using HTTP/2, but test whether this is really true for your site before making an implementation decision.

It all comes down to performance – and on that front, we have good news and bad news.

The good news is that an initial, internal test we ran here at NGINX shows the result that theory would predict: for mixed-content web pages requested over connections with typical Internet latencies, HTTP/2 performs better than HTTP/1.x and HTTPS. The results fall into three groups depending on the connection’s typical round-trip time (RTT): 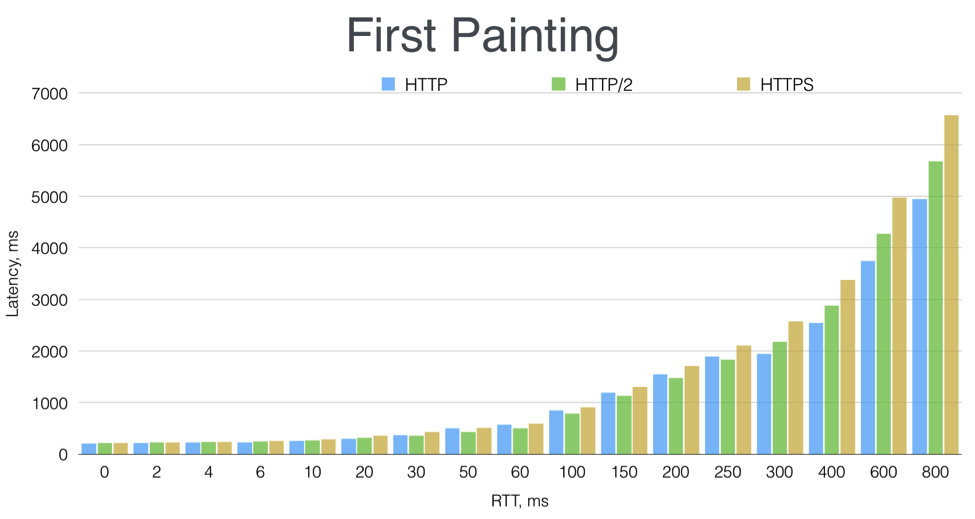 The figure shows the time to first painting – that is, the time until the user first sees Web page content appear on their screen. This measurement is often considered critical to users’ perception of a web site’s responsiveness.

For details of our testing, see the HTTP/2 presentation that NGINX developer Valentin Bartenev delivered at nginx.conf 2015.

However, every web page is different, and indeed every user session is different. If you have streaming media or large downloadable files, or if you’ve scienced the, err, sugar out of your HTTP/1.x optimizations (with apologies to The Martian), your results may be different, or even opposite.

The bottom line is: you might find the cost-benefit trade-off to be unclear. If so, learn as much as you can, do performance testing on your own content, and then make a call. (For guidance, see the NGINX webinar, What’s New in HTTP/2?.)

Terminating a protocol means that clients connect to a proxy server using a desired protocol, such as TLS or HTTP/2. The proxy server then connects to application servers, database servers, and so on without necessarily using the same protocol, as shown in the figure.

Using a separate server for termination means moving to a multi-server architecture. The servers may be separate physical servers, virtual servers, or virtual server instances in a cloud environment such as AWS. This is a step up in complexity compared to a single server, or even an application server/database server combination. But it affords many benefits and is virtually – no pun intended – a necessity for busy sites.

Once a server or virtual server is placed in front of an existing setup, many things are possible. The new server offloads the job of client communications from the other servers, and it can be used for load balancing, static file caching, and other purposes. It becomes easy to add and replace application servers and other servers as needed.

NGINX and NGINX Plus are often used for all of these purposes – terminating TLS and HTTP/2, load balancing, and more. The existing environment doesn’t need to be changed at all, except for “front-ending” it with the NGINX server.

If you’re in a hurry to implement the new style of Web transport protocol, and you want to support the largest possible number of users today, you can start out by offering SPDY. Then, in early 2016, when SPDY support begins to be removed, you can switch over to HTTP/2 – a quick change, at least with NGINX. By that point more users will be on browsers that support HTTP/2, so you will have done the best thing for the largest number of your users during this transition.

Tip 4. Identify Your Use of HTTP/1.x Optimizations

Before you decide to implement HTTP/2, you need to identify how much of your code base is optimized for HTTP/1.x. There are four types of optimizations to look out for:

The last three types of optimizations all combine small files into larger ones to reduce new connections and initialization handshaking, which is especially expensive for TLS.

The first optimization, domain sharding, does the opposite – forces more connections to be opened by involving additional domains in the picture. Together, these seemingly contradictory techniques can be fairly effective in increasing the performance of HTTP/1.x sites. However, they all take time, effort, and resources to design, implement, manage, and run.

Before implementing HTTP/2, identify where these optimizations exist and how they are currently affecting application design and workflow in your organization, so you can then modify or undo them after the move to HTTP/2.

Actually deploying HTTP/2 or SPDY is not that hard. If you’re an NGINX user, you simply “turn on” the protocol in your NGINX configuration, as described here (PDF) for HTTP/2. The browser and the server will then negotiate to choose a protocol, settling on HTTP/2 if the browser also supports it (and if TLS is in use).

Once you implement HTTP/2 at the server level, users on browser versions that support HTTP/2 will have their sessions with your web app run on HTTP/2. Users on older browser versions will have their sessions run on HTTP/1.x, as shown in the figure. If and when you implement HTTP/2 or SPDY for a busy site, you’ll want to have processes in place to measure performance before and after, and reverse the change if it has significant negative impacts. 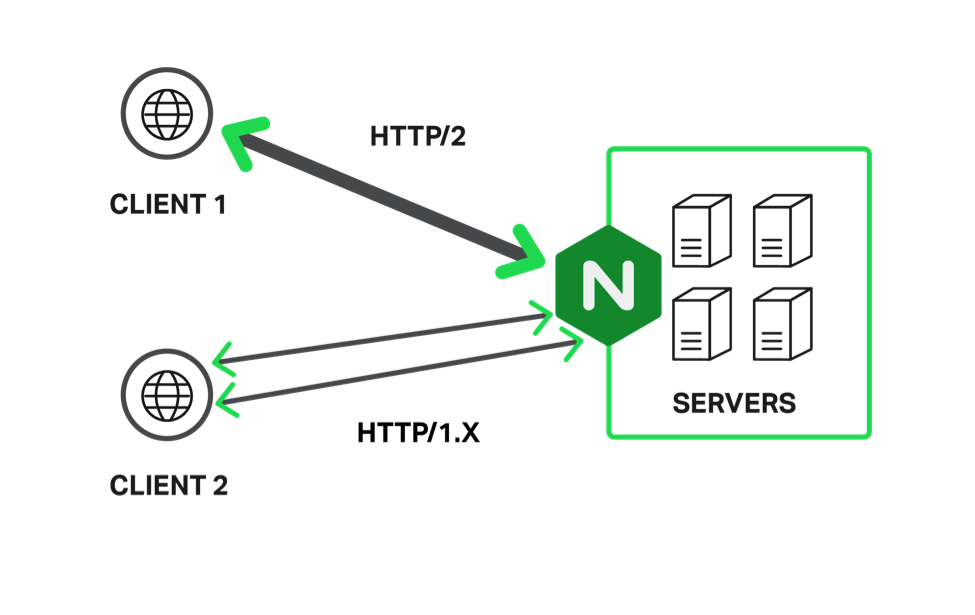 Note: The use of ciphers you use with HTTP/2 may require extra attention. The RFC for HTTP/2 has a long list of cipher suites to avoid, and you may prefer to configure the cipher list yourself. Consider setting ssl_buffer_size on, then testing your preferred ciphers with all popular browser versions.

Surprisingly, undoing or revising your HTTP/1.x optimizations is actually the most creative part of an HTTP/2 implementation. There are several issues to consider and many degrees of freedom as to what to do.

Before you start making changes, consider whether users of older browsers will suffer from them. With that in mind, there are three broad strategies for undoing or revising HTTP/1.x optimizations:

Caching is a bit of a wildcard. Theoretically, caching operates optimally where there is a plethora of small files. However, that’s a lot of file I/O. Some concatenation of closely related files may make sense, both for workflow and application performance. Carefully consider your own experience and what other developers share as they implement HTTP/2.

Domain sharding is perhaps the most extreme, and also possibly the most successful, HTTP/1.x optimization strategy. You can use a version of domain sharding that still improves performance for HTTP/1.x but is basically ignored, and beneficially so, for HTTP/2. (Which generally doesn’t benefit from domain sharding, because of the use of a single connection.)

You can find details here.

If these conditions are in place, sharding will happen for HTTP/1.x – the domains are different enough to trigger browsers to create additional sets of connections – and not for HTTP/2; the separate domains are treated as one domain, and a single connection can access all of them.

HTTP/2 and TLS are likely to improve your site performance and let users know that their interaction with your site is secure. Whether you’re first on your block to implement HTTP/2, or catching up to competitors, you can add HTTP/2 support quickly and well.

Use these tips to help you achieve the highest HTTP/2 performance with the least ongoing effort, so you can put your focus on creating fast, effective, secure applications that are easy to maintain and run.

Published at DZone with permission of Valentin Bartenev. See the original article here.