Nowadays when people setup and configure services, nobody will enjoy doing it in a manual way.

Here comes a new question. How do you automate the process, and make it fast and reliable? Wrap up some ssh scripts? Leverage CM(configuration management tools) like Chef, Ansible, or Puppet? Use Docker run? It’s great that we now have many options. But, as you may guess, not all of them are equally good.

You want a headache-free solution, right? You also want it real quick, don't you? Then you cannot miss docker-compose! Here are some useful tips and lessons learned using docker-compose.

I’m not here to argue with you that docker-compose is the best for all scenarios. There are definitely some which we cannot or should not Dockerize, but I still insist that it’s capable for most cases.

CM is good, but Docker/docker-compose is just better for environment setup. Not convinced, my friends? Give it a try and challenge me now!

With the plain Docker facility, we can setup environments like below:

But… the command is just too long, isn’t it? What if you need to start multiple different containers? You could easily mess it up, right?

It's show time for docker-compose, an advanced version of docker run.

Just one single command, docker-compose up -d! We can run the same deployment process against another new environment within just a few seconds. Beautiful, isn’t it? 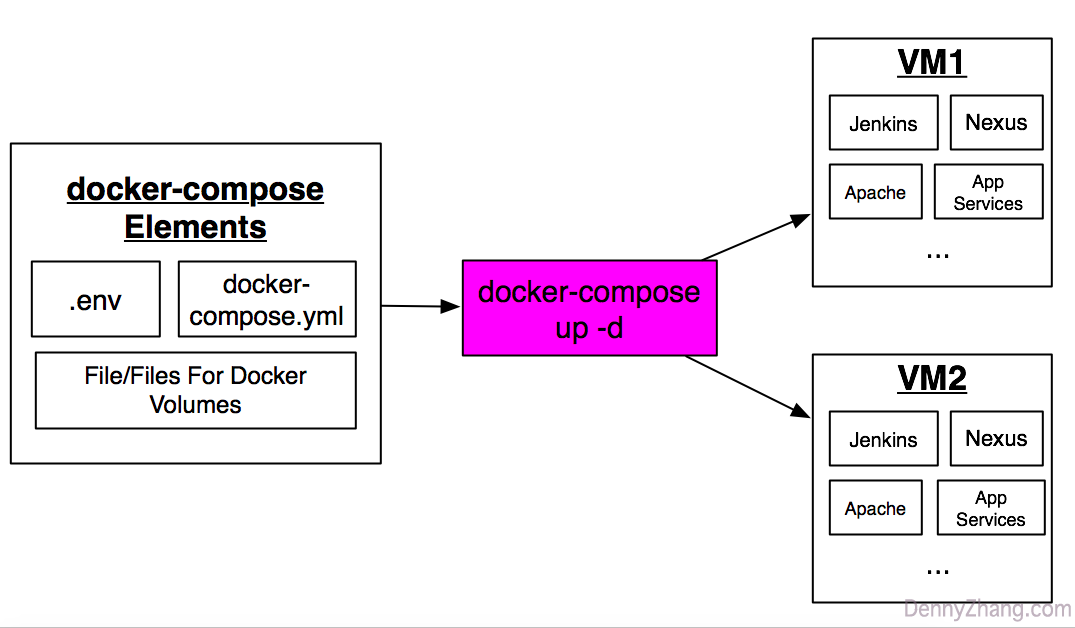 1. Infrastructure-as-Code: Host All Setup and Configuration Logic in Git Repo

You may get surprised how insecure the Docker port mapping feature is! Let me show you.

Imagine you have a MySQL instance running with the below docker-compose.yml.

With the default setting, anyone from the internet can access your db, port 3306.

Why? Docker adds iptables rules widely open FOR YOU. Sweet, isn’t it? Anywhere can access them.

Let’s limit the source IP for the access. Good idea! Unfortunately, it’s impossible. That rule is added by Docker. To make it worse, it provides no hook points for us to change this behavior.

With some more thinking, you may think: how about I delete the rules created by Docker, and add a new rule? I’m an iptable expert, it’s easy. Well, it’s not easy. The tricky part is your customized iptable rules won’t be recognized and managed by Docker. It would easily mess up when the service/machine reboots. Especially when we restart container, the IP will change.

So instead of default port mapping, I only bound the port mapping to a specific IP address, like below.

Make sure the containers don't hold any unrecoverable application data. We can safely recreate Docker environments, or even migrate to another environment, completely and easily.

docker-compose can overwrite an existing file:

Ideally, there should be no more than 3 steps:

All critical data would be in volumes only. To backup the system, we just need to backup the folders of data volumes.

When the data volumes are not very big, we can

During deployment, any request to external services is a failure point.

To make sure the deployment is more smoothly, I always build my own docker images pre-download packages/files, if necessary.

Monitoring and alerting are good.

Try uptimerobot.com. It runs a URL check/port check every five minutes. If the check has failed, we can easily get Slack or email notifications.

Didn't I mention, uptimerobot.com is totally free? I’m happy to be a loyal customers for more than five years.

8. Debugging: Change the Entrypoint in docker-compose.yml for Temporary Troubleshooting

For a complicated docker-compose environment, some services may fail to start, but when debugging the issues, it’s better to have the containers up and running.

I find it useful to replace the containers’ start logic with some dummy placeholder.