I don’t get to write code much these days. Once upon a time, I spent all day coding, compiling, and debugging within an IDE, poring over documentation, or trawling through developer forums to find out if anyone else has ever seen and resolved the latest weird compile error that’s blocking my path.

Time moves on, though — I’m sure that today’s developers, working in a comparative industry and location, would say things are much the same. There’s a big world out there beyond my limited experience, however, and I find it fascinating to get insight from a global spectrum of developers via various surveys and reports on the resulting data.

Here are some of the recent reports that are interesting to those studying developer attitudes to AI.

The results of the Stack Overflow 2018 survey were released in late March 2018. You can see the results here and the full anonymized data will be made available in late May. There is so much to dig into, but as I read and write mostly about AI these days, I’ll highlight a couple of the key takeaways from that perspective:

2018 Women in Tech Report by HackerRank

As a woman in technology, this report is of great interest to me. The survey data shows that the gender gap among coders is shrinking, albeit slowly. More women choose formal computer science and STEM degrees to advance their coding careers (young women today are 33% more likely to study computer science compared with women born before 1983).

Among the women answering the survey, the most common programming languages were Java, JavaScript, C, C++, and Python.

While this report is limited in detail and by the number of developers surveyed, there is another interesting review published by HackerRank on their blog in early 2017. The company creates coding challenges to highlight developer talent — hundreds of thousands of developers from all over the world participate in these challenges. HackerRank decided to analyze the data of 2M+ developers and uncovered that about 17% of people who had solved their coding challenges were female.

SlashData’s Developer Economics survey reveals the latest trends from mobile, desktop, IoT, cloud, web, game, augmented and virtual reality, and machine learning developers and data scientists. The 14th global survey polled more than 21,700 developers in 169 countries and reported on trends in AI (which I’ll briefly cover below) and also in serverless platforms, AR/VR, and programming language uptake, which I won’t touch on here, but you can download the report for further details.

The report asked developers about six emerging technologies where AI plays a central role. Half of the developers answering the survey (52%) thought that self-driving cars will have the most impact in the next five years. Advances in brain-computer interfaces (BCI) and machine learning models also captured the attention of developers with 35% and 37% of developers considering these technologies to be the next big thing. Augmented reality glasses and conversational interfaces take the next slots (31% and 30%). The fact that 30% of developers answering the survey were involved in AI development and projects is an indication of the impact AI is already making. 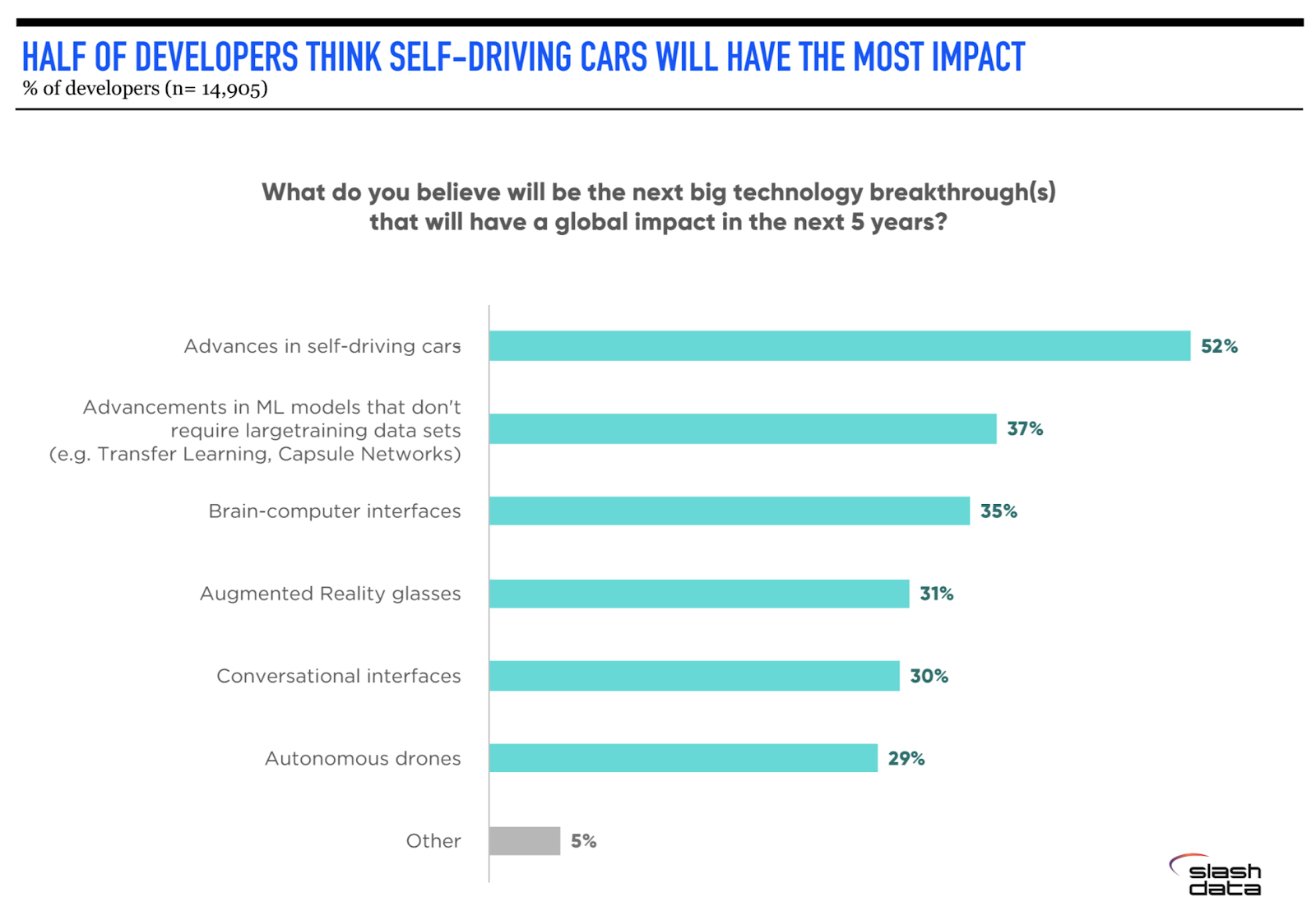