This architectural style took the world by storm as soon as cloud computing made all those ideas actually feasible and usable in the real virtual world, contributing to the rise, expansion, and damnation of several corporations (see Netflix, Blockbuster, Spotify, Disney), fundamentally changing the way we looked at and worked in IT in companies of any size.

Of course, there are other factors that have been crucial in these transformations, as somebody may point out…

However, it is undeniable that, if done right, microservices enable businesses to reach a superior level of agility that can be decisive in today's market.

I hear you already: "Agility, agile, here we go again! What does that even mean?"

I know! You are totally right! Yet another word that has been used in a million different contexts. Let's define it then!

"The ability of an organization to sense environmental change and respond efficiently and effectively to that change."

And McKinsey agrees with that, quoting them:

"The ability of an organization to renew itself, adapt, change quickly, and succeed in a rapidly changing, ambiguous, turbulent environment."

In other words, it is what evolution is all about. Remember Darwin?

"It is not the strongest species that survive, nor the most intelligent, but the ones most responsive to change."

That is why microservices are also referred to as an example of Evolutionary Architecture.

However, as voiced by many professionals, microservice architecture has specific drawbacks that need to be addressed. To understand this fully let's build up a quick framework we can use to compare Microservices with the old good monolith approach. The idea is simple. Let's define a specific set of properties we expect our product to have and see how the two architectures score.

Before we continue let me state the obvious: in the following graphs higher means better :) 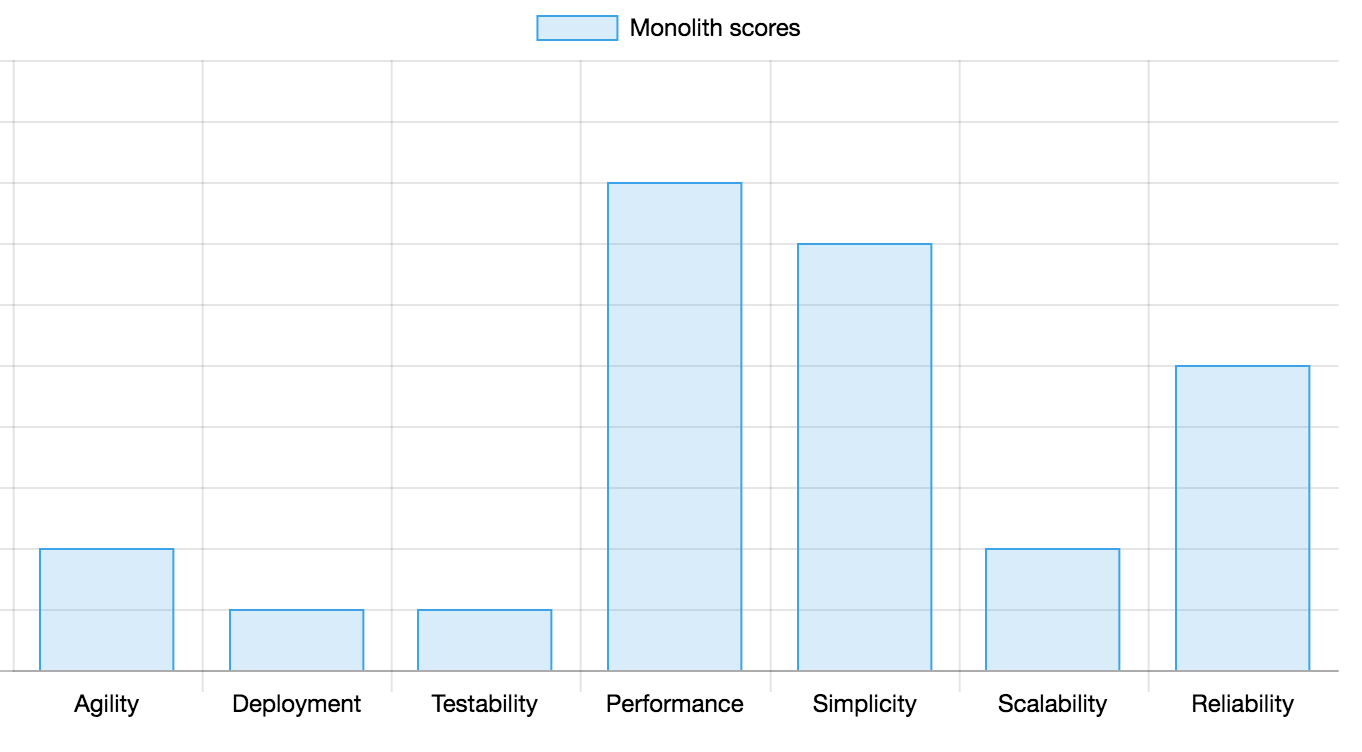 As you can see the monolith score greatly on:

However it does not do so well on the following properties:

I hear you again: "But then how is it possible that all software companies have been having such a great success out there before the advent of cloud computing and microservices?" Well, that's a great question! The way I see it there are two reasons:

These tools and processes have definitely made it better, as you can also see from the following chart: 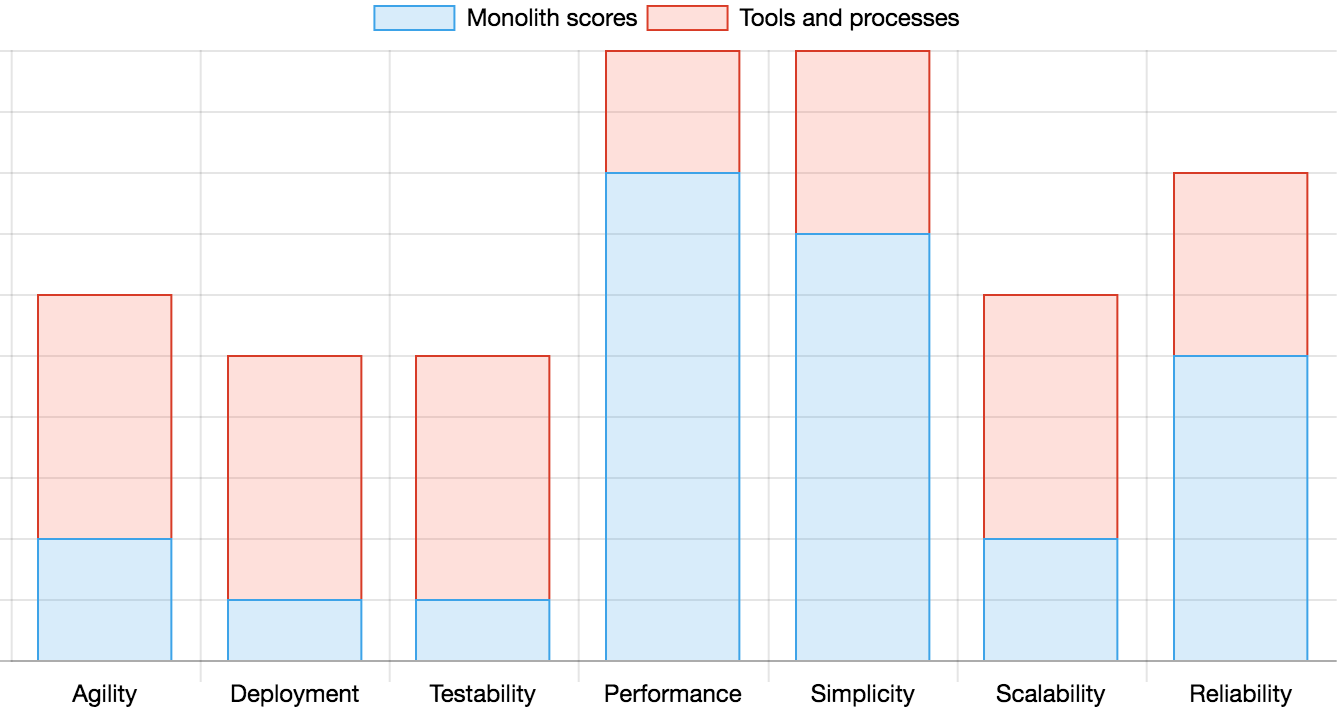 Just to give some practical examples of what I mean, let's analyze the deployment area. Almost each single company has developed their own or bought some tools with the objective of improving and speed up the whole change process or some stages of it, just to mention some Commercial off-the-shelf (COTS) products: Microsoft Release Management and TFS, Octopus Deploy, Team City, the Atlassian suite, and so on. Moreover, process-wise, this has historically been heavily centralized and bureaucratized in order to ensure resiliency during and after any change. Just think that ITIL has a full volume just on this, called Service Transition. The same importance is given in other frameworks as ASL2, COBIT, and so on.

To improve testability, mocking frameworks have been widely used in order to improve isolation, and development processes as Test Driven Development (TDD) are now being adopted all the way to container-based development because of its great benefits.

As Sam Newman puts it:

"Microservices are small, autonomous services that work together."

Cool, so we are speaking about a distributed system made of small services… but how small should a microservice be? There are many ways to answer this question, one more abstract than the next. The one rule I think we should definitely follow is the application of the Single Responsibility Principle from Robert C. Martin:

Just by following this principle, we define the size of a microservice based on the type and complexity of the system at hand, which, from my point of view, makes a lot of sense, and at the same time ensures that a fundamental property of microservices is respected: each microservice must be independently deployable. In this case, this will always be true since all the tightly-coupled code that changes together is actually grouped in the same microservice (or, it should be).

We have just scratched the surface here about microservices. People have written books about it, so if you are interested more in the architecture, I advise you to read further — it is extremely interesting!

Some good places to start digging are Martin Fowler's or Sam Newman's pages.

Anyway, let's move on to see how our microservice architecture scores. 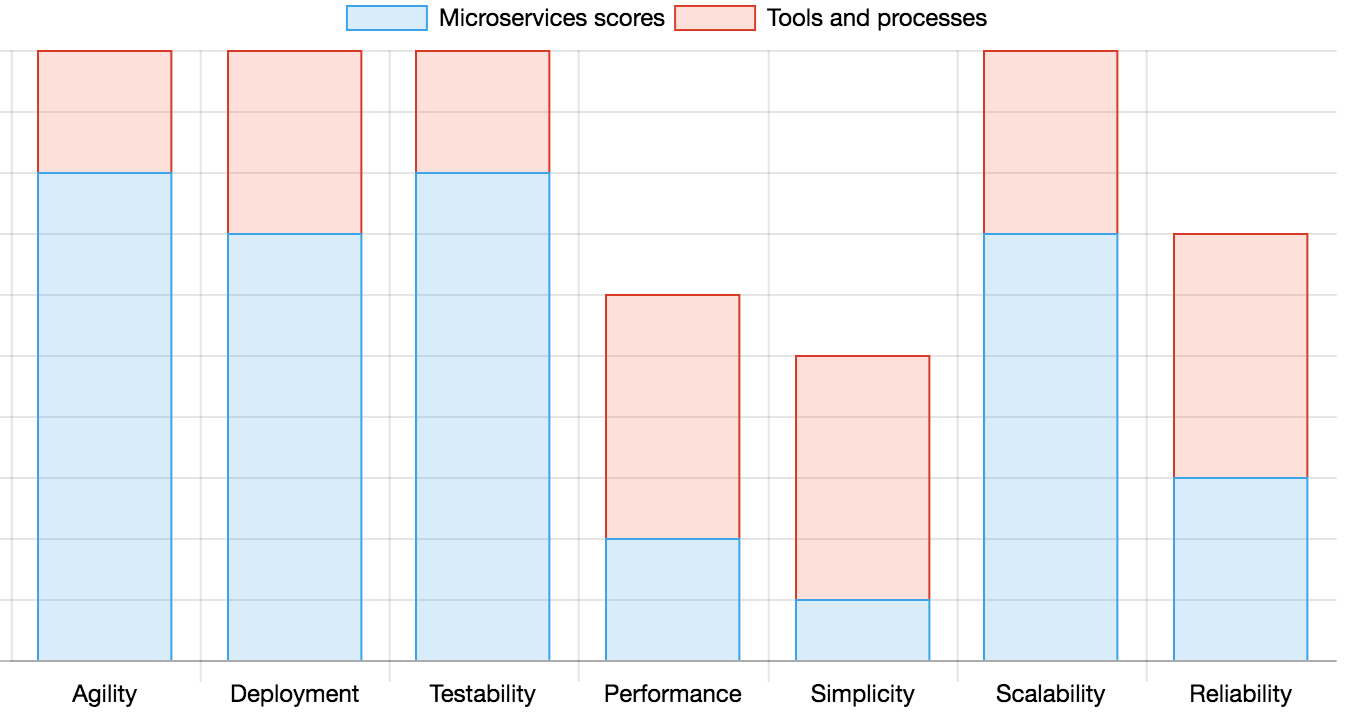 As you can see, that's almost the opposite situation of the monolith. Since this architecture is focused on maximizing agility, it does score high on the following properties:

Hover, this approach has some serious pains, namely

Some part of your systems or applications will surely need to excel in performance or reliability and be fully optimized in those areas, because, for your business, they are as important as life support systems or nuclear power control software.

For all the rest, go for microservices. Go for it as early as possible and, please, do not start with a monolith.

I hope that by the time you reached this section, you agree with me that developing on a microservice system and developing on a monolith are quite different. Some of the tools, approaches, and processes are generically improving the development processes on both architectures; just to mention some examples: TDD, the practice of containerizing your application, and so on. However, others are specific for one architecture. It is extremely dangerous to adopt CI/CD practices for large monolithic applications, as it is completely useless and even harmful in some cases to force centralized Release Management practices on the delivery process for a microservice-based application.

If you allow me the use of a metaphor, it is like milking cows and growing grains. They are part of the same world, farming, but they differ quite a lot. You can invest in improving the quality of the water that is used in your farm. This helps both your dairy cattle and your grains. If you spread manure at the right time of the year on a field of wheat you can maximize your harvest and get rid of your manure in one go.

Do not spread manure on your dairy cows. It just does not help.