Taking a cue from the concepts, we propose a prototype architecture for an asynchronous and distributed JAX-RS provider:

Suspension of the invocation would imply dispatching the processing asynchronously to some other component of the provider. From JAX-RS perspective, this processing component would need to invoke an (annotated) method on a plain Java class via introspection, and probably pass the query/path params and/or POST content as arguments to it.

If we build the provider on top of a data distribution platform (data grid), then we can distribute the request data (arguments, request details, correlationid). A receiving member would then need to dispatch the request data to the processor component, which would actually execute the invocation. The response would be stored in the data grid, corresponding to the correlationid.

This correlationid would have been sent back to the client, as a part of the redirection URL.

We used Hazelcast as the data grid provider in this project. The distributed IMap, provided by Hazelcast can have local entry listeners attached to it. Entry listeners receive callbacks on map entry events like put/get/remove etc. Thus, whenever a request data is added (put) to a distributed map, an entry listener on the data owning node will be notified. The received data would be delegated to the processing component, to perform the dispatch to JAX-RS annotated service methods.

I have tried to represent it pictorially using a sequence diagram. Well, this may not be the best example of an SD usage, but it will probably bring out the basic idea. 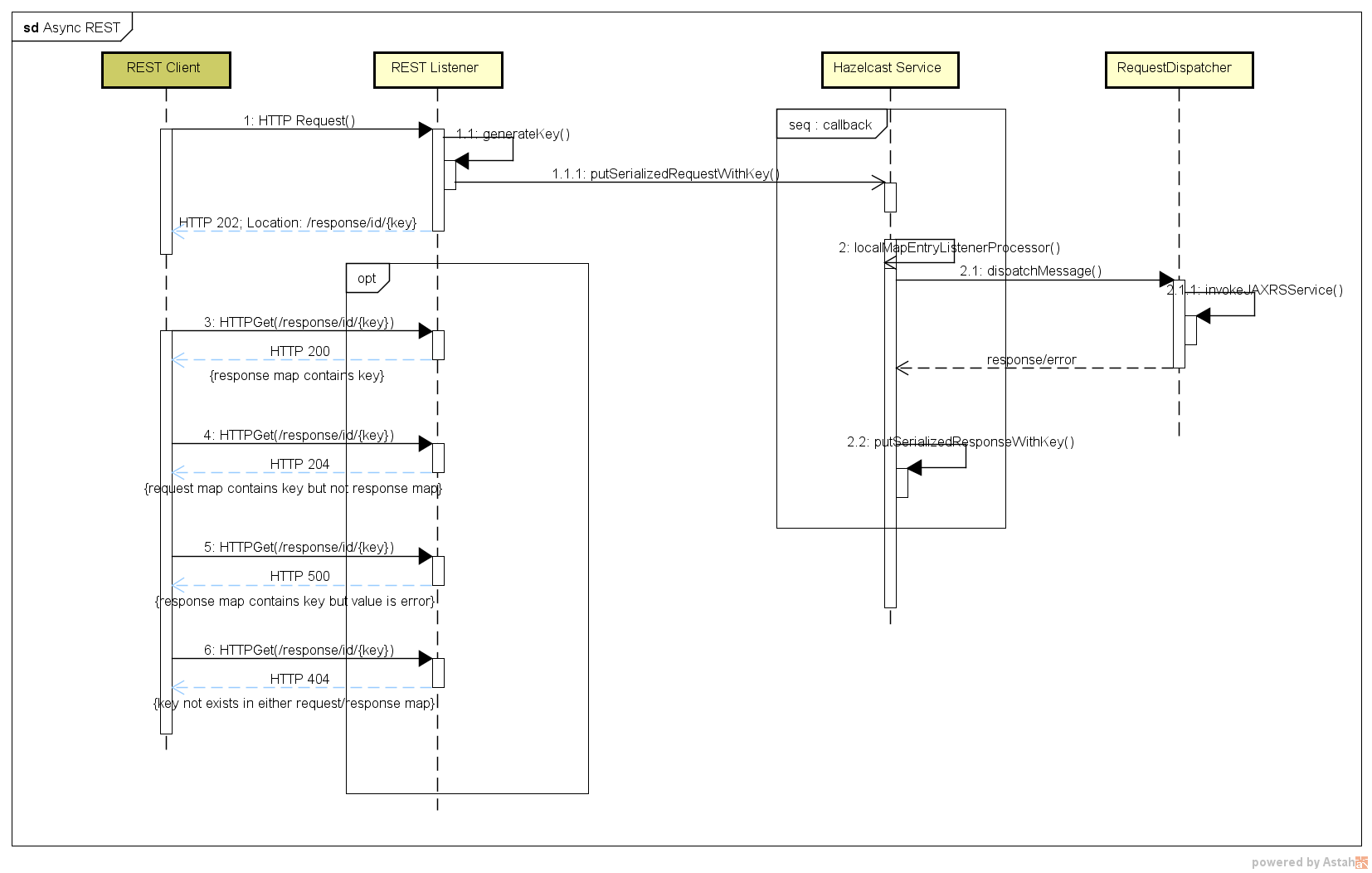 The following logical components would be required in order to design the platform:

Using this approach for asynchronous RESTful processing, we can delegate execution not only in separate worker threads, but as well as on separate worker nodes. As an afterthought, the framework can well be extended to implement a distributed microservice provider.

A Spring Boot project is available on GitHub. The REST Listener is built on top of a lightweight, open-source Netty-based library, Webbit.

Being a prototype project, it has some limitations as of now. Basically the project implements a small subset of the JAX RS 2.0 specs.

Given below is an example of an async REST service. The interesting point to note here is that the actual method invocation is guaranteed to be executed on a separate thread (and probably in a separate JVM altogether) asynchronously.

On invocation of asyncResponse.resume(), the response is made available at resource URI, as shared in the initial response.