This article is a continuation of A First Look at Google Stadia.

While a vision and technical specifications are essential for a gaming system, they alone do not sell units or subscriptions. In the end, what matters are the features provided to the player and the developer creating games for the enjoyment of the player. The Stadia keynote was lacking some vital information in that department, but it did include some insightful information on features that align with its vision, including Couch Multiplayer, State Share, Crowd Play, and Style Transfer ML.

Couch Multiplayer (sometimes called couch co-op) has been falling by the wayside in recent years. While some games, such as Mario Kart 8: Deluxe, continue to be staples of face-to-face, split-screen multiplayer, many other games have removed this feature. One of the difficulties in executing couch multiplayer is overcoming the tax that it puts on a console: Instead of rendering a single image for each frame, the console must now render multiple images and fuse them into a single image.

For example, if one player fires a weapon in view of a second player in a split-screen game, the console must render the image of the weapon firing from the perspective of the player who fired the weapon and the player who observed the shot. These two renderings are then put together side-by-side to form the split-screen scene. Rendering from a single perspective can be challenging enough, but as the number of players grows to two and beyond, the task can become overwhelming.

Since Stadia game sessions reside within the same network on different nodes, each node can be responsible for rendering one of the perspectives and then multiple views can be sent to another node to be fused. In essence, each player has his or her own Stadia node, and the nodes aggregate their frames into a single frame (image from Stadia keynote). 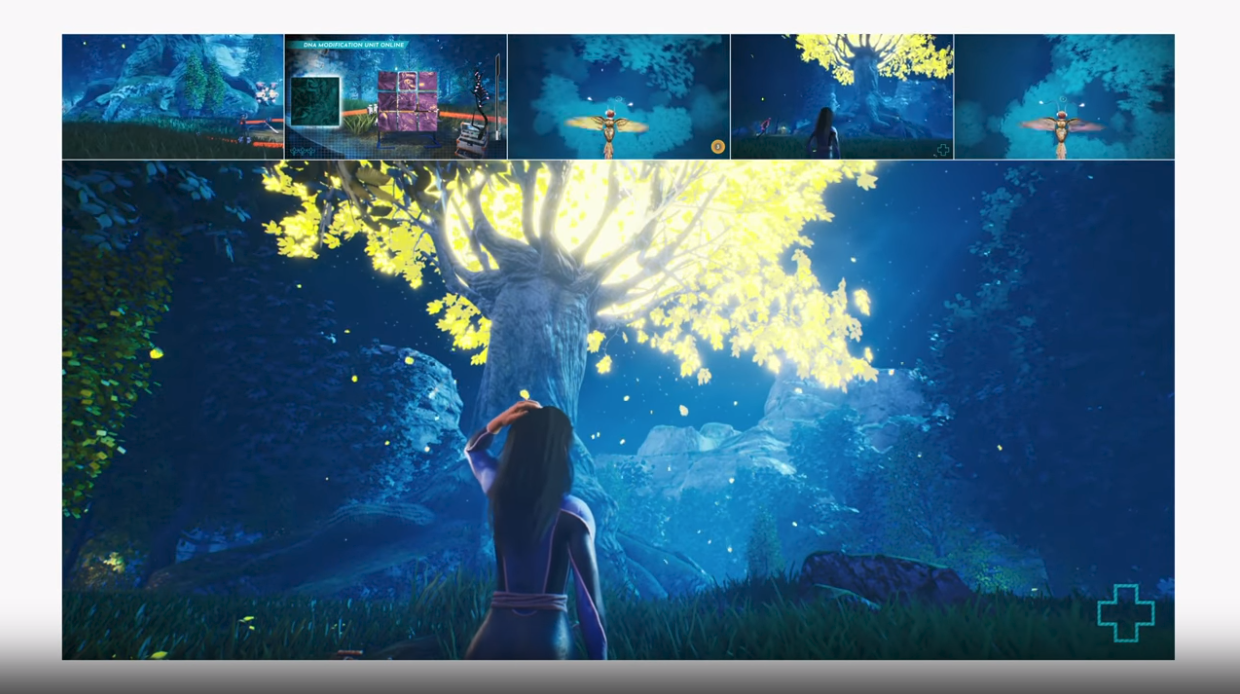 It is difficult to tell the applicability of this feature until games begin to employ it—if any do—but it does provide useful information on the potential for multiplayer games. As previously mentioned, Stadia's approach to gaming lends itself very well to multiplayer games, especially those with a considerable number of players. Seeing Couch Multiplayer in action shows how effective Stadia can be at simultaneously rendering numerous perspectives of the same environment and how data can be transmitted from one game session to another with very low latency.

Save states have been a mainstay of gaming since consoles became powerful enough to save a player's progress to persistent storage on the console or directly to the game itself. With Stadia, this ability is taken to the next level, allowing game developers to store a playable moment in a game and share this playable moment with anyone through a simple Hypertext Transfer Protocol (HTTP) link. Anything can be shared, including world state, player position, inventory—anything that can be packed into a shareable moment.

By clicking the HTTP link, another user can immediately pick up the game with the same state. Since Stadia streams its games, this is a skillful way to utilize HTTP links to share the state of a game session. We assume that the Stadia API provided to developers has a mechanism to capture playable moments, allowing for players to instantly capture the state of a game (image from Stadia keynote).

The potential of this feature is endless, especially for those who live-stream their game sessions: a streamer could capture a playable moment in a game and instantly allow his or her viewers to attempt a challenge for themselves. In some cases, viewers can also jump into the game with their favorite streamer through crowd play.

According to Ryan Wyatt, Global Head of Gaming and Virtual Reality at YouTube, more than 200 million users actively watch a game content each day. Even more astounding, users watched more than 50 billion hours of gaming content on YouTube alone in 2018—that's just YouTube; that does not count other successful platforms like Twitch. To close the gap between content creators on YouTube streaming games and their viewers watching games, Stadia includes a feature called Crowd Play that allows viewers to queue up and join a streamed game on YouTube (image from Stadia keynote). 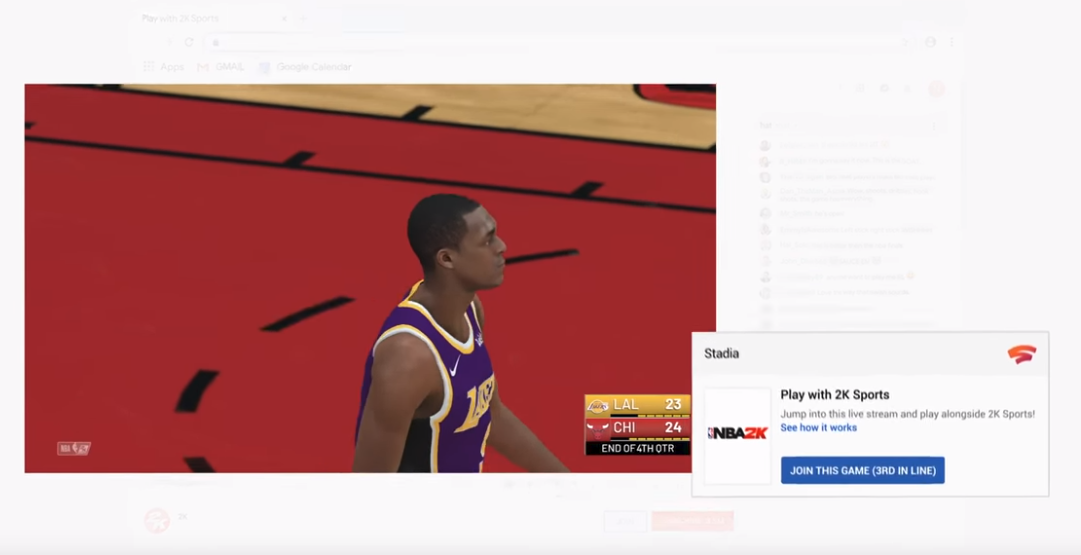 YouTube will provide a link within the video User Interface (UI) allowing viewers to actively take part in the game being streamed. Although this is a great feature for some, other streamers will not necessarily want their viewers jumping into the game with them. Stadia allows the streamer to control whether or not they want their viewers to be able to join their game via Crowd Play.

While Crowd Play can be a great feature for some streamers, the jury is still out on whether this feature will be practical for large streams. For example, can anyone join via Crowd Play? If so, how does YouTube limit the number of viewers that can queue up if a stream has, say 100,000 viewers? This feature does look promising, but without more information, it can be unusable for some streamers.

At times, developers want to tweak the style of a game and see how it affects the look and feel, but that process can be difficult, requiring changes to countless assets. Stadia includes a feature called Style Transfer ML that uses Machine Learning (ML) to apply an image to the entirety of the video frame for a game. This application is performed in real-time, changing the style of each rendered frame, rather than pre-computing the rendering. For example, Google demonstrated this feature by applying Wassily Kandinsky's Yellow-Red-Blue to a gray-box game to produce the following style (image from Stadia keynote):

While not a player feature, Style Transfer ML is a nifty feature for developers and an interesting application of ML in game design. At the moment, we do not have an example of a Stadia game using this feature in production, but it will be interesting to see how applying this feature—possibly in a dynamic manner—can add some interesting flair to games.

Stadia is a multi-platform service that can be streamed to a wide array of devices. Many of these devices—such as phones, tablets, and TVs—do not natively have standard inputs, such as controllers or a mouse and keyboard. To support these devices, Google is launching a new piece of hardware: The Stadia Controller (images from The Verge: left; right).

This controller is reminiscent of the Nintendo Switch Pro Controller, but according to Digital Foundry, feels like an Xbox One controller. The controller includes the normal assortment of buttons and triggers, such as the A-B and X-Y button pairs, two analog sticks, a D-pad, and a pair of left and right trigger buttons. It has a USB-C port at the top and a 3.5 mm headphone jack at the bottom (image from Stadia keynote, annotations added). 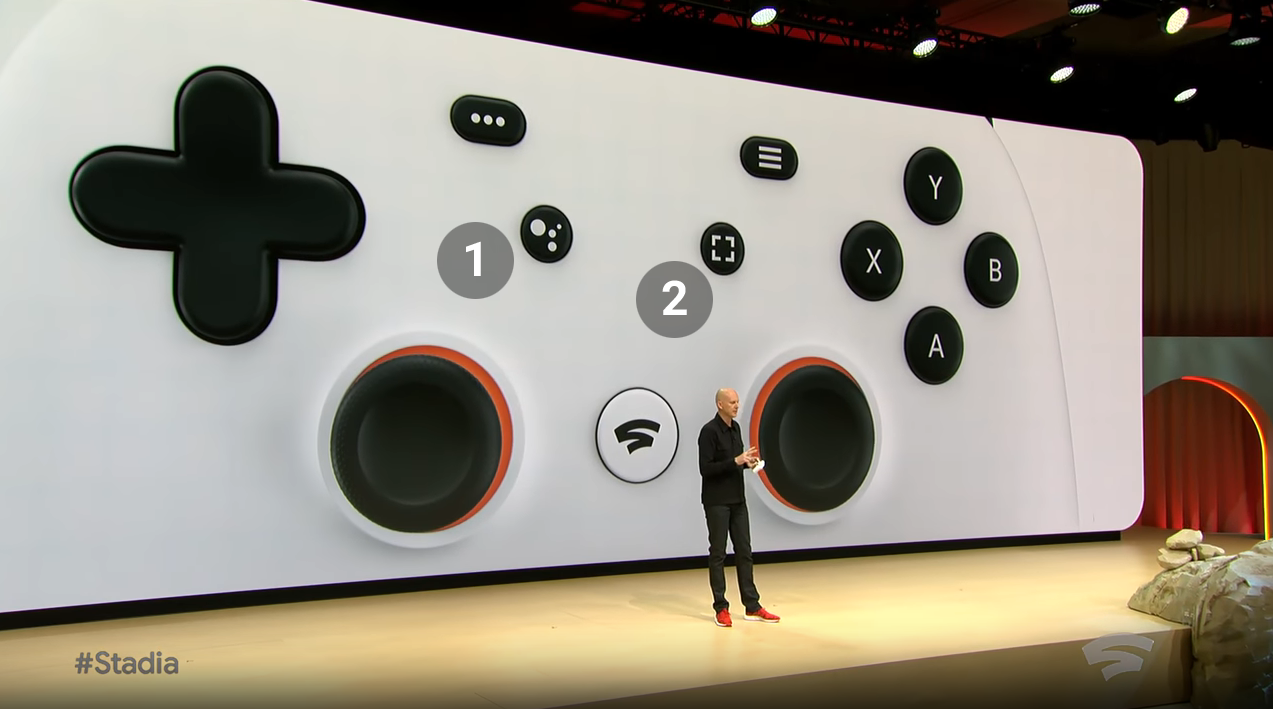 In addition to these standard features, the face of the controller sports two more buttons:

In a special Google touch, the bottom of the controller also includes the Konami Code (image from Stadia keynote; hat tip to Eli Blumenthal for spotting it): 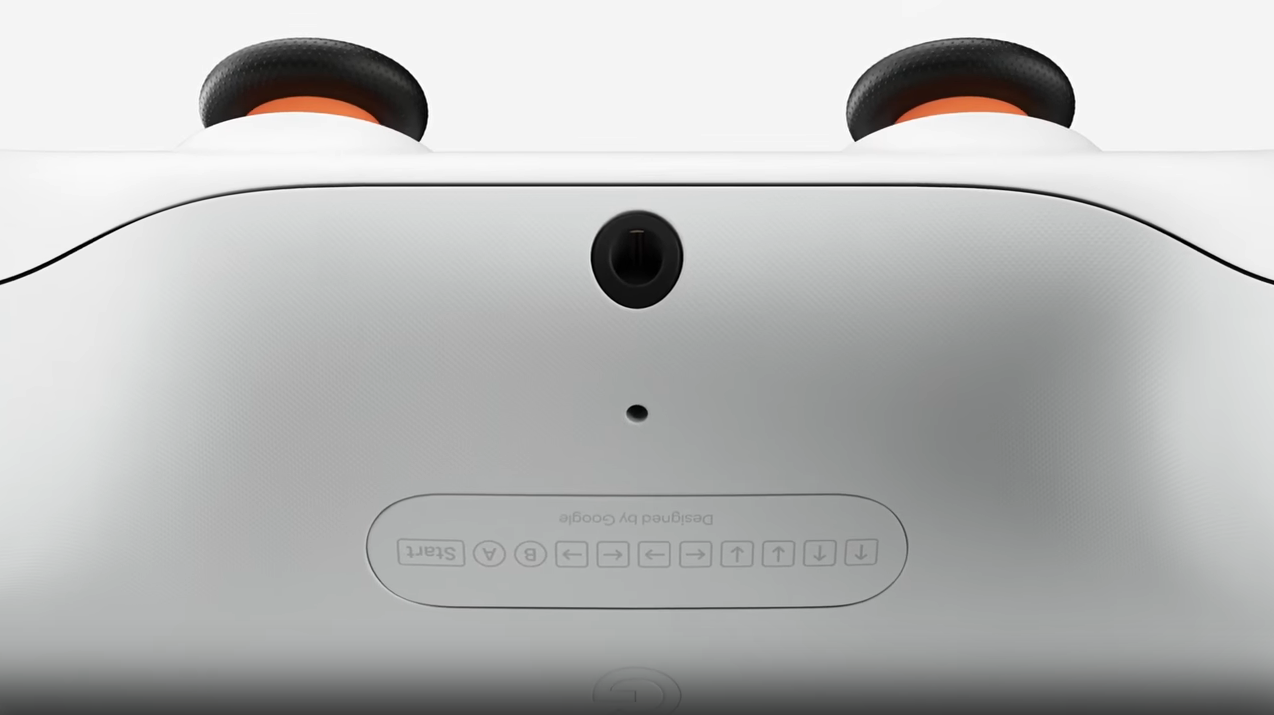 There is one major factor that differentiates the Stadia Controller from other video game controllers: It connects over WiFi directly to the game instance playing in the Google Data Center. Most controllers are connected over some short-distance wireless protocol, such as Bluetooth, directly to a console. Instead, the Stadia Controller connects to the game session, allowing a player to identify which device you want to run the game on and pairing that device with a player's game session running in the cloud. According to Harrison:

[This ensures] the highest possible performance and the best experience for players.

According to The Verge, the controller will be paired with a companion app:

Harrison says you’ll pair it with the Stadia network using a companion mobile app, which will connect the controller first to your local Wi-Fi network and from there to Google’s Stadia service.

Google has not yet given a price for the controller, although they stated in a Kotaku interview that they would talk about the cost of the service—which we would assume would include talk about the price of its peripherals—in the summer.

The Stadia keynote and accompanying interviews with the media provided a great deal of information about Google's plans for Stadia, but there were a few key pieces of information that were missing:

It is still early in the life of Stadia, and more information will be coming in the summer—possibly at E3 2019—but there are still some significant, unanswered questions that must be resolved before judging the viability of Stadia.

(Note that this section is solely the opinion of the author, and does not represent DZone's collective opinion on Google or Stadia.)

Stadia is a massive leap in the technology of game streaming, and it would take a company with the resources of Google to pull it off, but there are some significant concerns that I have about the acceptance of Stadia as one of the major players in the game industry. Specifically, I have three concerns:

Although I may appear sour on the outlook of Stadia, I find the technology very impressive; but there is a still a long way to go beyond computer science before Stadia can establish itself as a big player in the gaming community. Only further announcements from Google will bring its vision closer to reality, but in the meantime, the introduction of Stadia by Google has brought some much-needed outsider competition into a market that has been hyper-focused on reinvention, rather than innovation, for a long time.