As a prologue to this article, I want to remark a short sentence for the notional reader. This quote will be important as we move forward: "Absolute security does not exist. Security is a set of measures, being piled up and combined, trying to slow down the inevitable."

Almost three years ago, I wrote a post giving some ideas to protect String tokens from a hypothetical attacker decompiling our Android application. For the sake of remembrance, and in order to ward off the inescapable death of the Internet, I am reproducing some sections here.

One of the most common use cases happens when our application needs to communicate with a web service in order to exchange data. This data exchange can oscillate from a less to a more sensitive nature, and vary between a login request, user data alteration petition, etc.

The absolute first measure to be applied is using an SSL (Secure Sockets Layer) connection between the client and the server. Go again to the initial quote. This does not ensure an absolute privacy and security, although it does a good initial job.

When you are using an SSL connection (like when you see the locker in your browser) it indicates that the connection between you and the server is encrypted. On a theoretical level, nothing can access the information contained within this requests.

Did I mention that absolute security does not exist? SSL connections can still be compromised. This article does not intend to provide an extensive list of all the possible attacks, but I want to let you know of a few possibilities. Fake SSL certificates can be used, as well as Man-in-the-Middle attacks.

Let’s move forward. We are assuming our client is communicating via an encrypted SSL channel with our backend. They are exchanging useful communicate, making their business, being happy. But we want to provide an additional security layer.

A next logical step used nowadays is to provide an authentication token or API Key to be used in the communication. It works this way. Our backend receives a petition. How do we know the petition comes from one of our verified clients, and not a random dude trying to gain access to our API? The backend will check if the client is providing a valid API Key. If the previous statement happens to be true, then we proceed with the request. Otherwise, we deny it and depending on the nature of our business we take some corrective measures (when this is happening, I particularly like to store the IP and IDs from the client to see how often this is happening. When the frequency is swelling more than it is desirable for my fine taste, I do consider a ban or observing closely what the impolite internet dude is trying to achieve).

Let’s construct our castle from the ground. In our app, we will likely add a variable called  API_KEY  that gets automatically injected in each request (if you are using Android, probably in your Retrofit client):

This is great, and works if we want to authenticate our client. The problem is that does not provide a very effective layer by itself.

If you use apktool to decompile the application and perform a search looking for strings, you will find in one of the resulting .smali files the following:

Yeah, sure. It does not say this is a validation Token, so we still need to go through a meticulous verification to decide how to reach this string and whether it can be used for authentication purposes or not. But you know where I am going: this is mostly a matter of time and resources.

Could Proguard help us to secure this String, so we do not have to worry about it? Not really. Proguard states in its FAQ that String encryption is not totally possible.

What about saving this String in one of the other mechanisms provided by Android, such as the SharedPreferences? This is barely a good idea. SharedPreferences can be easily accessed from the Emulator or any rooted device. Some years ago a guy called Srinivas proofed how the scored could be altered in a video-game. We are running out of options here!

I am going to refresh here the initial model I proposed, and how we can as well iterate through it to provide a more secure alternative. Let’s imagine two functions that could serve to encrypt and decrypt our data:

Nothing fancy here. These two functions will take a key value and a string to be encoded or decoded. They will return the encrypted or the decrypted token, respectively. We would call the following function as follows:

Are you guessing the direction? That is right. We could encrypt and decrypt our token on demand. This provides an additional layer of security: when the code gets obfuscated, it is not anymore as straightforward as performing a String search and check the environment surround that String. But can you still figure out a problem that needs to be solved?

Give it a couple of seconds more if you have not figured it out yet.

Yes, you are right. We have an encryption key that is being also stored as String. This is adding more layers of security by obscurity, but we still have a token on plain text, regardless of whether this token is used for encryption or is the token per-se.

Let’s going to use now the NDK, and keep iterating our security mechanism.

NDK allows us to access a C++ code base from our Android code. As a first approach, let’s take a minute to think what to do. We could have a native C++ function that stores an API Key or whatever sensitive data we are trying to store. This function could later on be called from the code, and no string will be stored in any Java file. This would provide an automatic protection against decompiling techniques.

It will be called easily in your Java code:

And the encryption/decryption function will be called as in the next snippet:

If we know generate an APK, obfuscate it, decompile it and try to access the string contained in the native function getSecretKey(), we will not be able to find it! Victory?

Not really. The NDK code can actually be disassembled and inspected. This is getting tougher, and you are starting to require more advanced tools and techniques. You got rid of 95% of the script kids, but a team with enough resources and motivation will still be able to access the token. Remember this sentence? "Absolute security does not exist. Security is a set of measures, being piled up and combined, trying to slow down the inevitable." 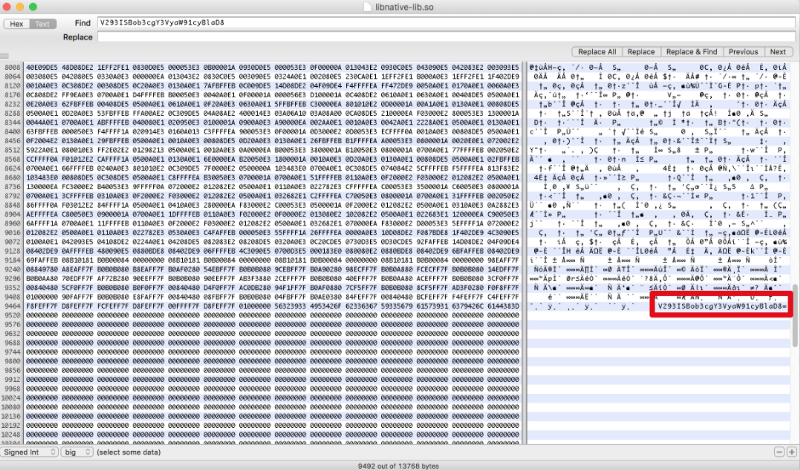 You can still access in disassembled code String literals!

Hex Rays, for instance, makes a very good job at decompiling native files. I am sure there are a bunch of tools as well that could deconstruct any native code generated with Android (I am not associated with Hex Rays neither receiving any kind of monetary compensation from them).

So which solution could we use to communicate between a backend and a client without being flagged?

Generate the Key in Real Time on the Device

Your device does not need to store any kind of key and deal with all the hassle of protecting a String literal! This is a very old technique used by services such as remote key validation.

The last paragraph includes a series of ideas, but our hypothetical reader has hopefully taken the main point.

"Absolute security does not exist. Security is a set of measures, being piled up and combined, trying to slow down the inevitable."

I want to point once more that your goal is to protect as much as possible your code, without losing perspective that 100% of security is unattainable. But if you are able to protect your code in a way that requires a vast amount of resources to decrypt any sensible information you have, you will be able to sleep well and quiet.

I know. You got until here, thinking throughout the entire article “how is this guy not mentioning Dexguard, and going through all the hassle?” You are right. Dexguard can actually obfuscate Strings, and they do a very good job at it. However, Dexguard pricing can be prohibitive. I have used Dexguard in previous companies with critical security systems, but this might not be an option for everybody. And, in Software Development as well as in life, the more options you have the richer and more abundant the world gets.

I write my thoughts about Software Engineering and life in general in my Twitter account. If you have liked this article or it did help you, feel free to share it, ♥ it and/or leave a comment. This is the currency that fuels amateur writers.