Kotlin offers many exciting features. In general, developers tend to cite null safety as their favorite. For me, it's function extensions. But delegation comes a close second.

The delegation pattern is described in the GoF book:

Delegation is a way to make composition as powerful for reuse as inheritance [Lie86, JZ91]. In delegation, two objects are involved in handling a request: a receiving object delegates operations to its delegate. This is analogous to subclasses deferring requests to parent classes. But with inheritance, an inherited operation can always refer to the receiving object through the this member variable in C++ and self in Smalltalk. To achieve the same effect with delegation, the receiver passes itself to the delegate to let the delegated operation refer to the receiver.

Delegation is critical when one chooses composition over inheritance. 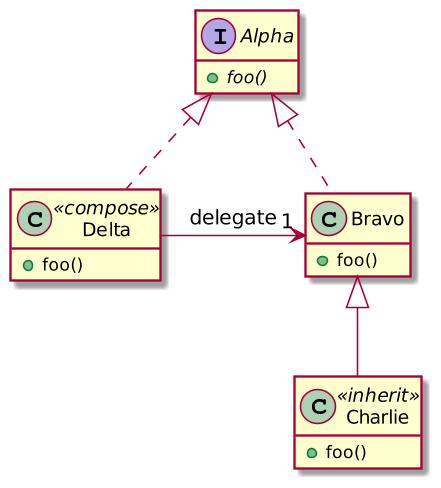 In Java, you need to code delegation manually. The example above translates into the following code:

Kotlin handles the delegation natively using the keyword by. You can write the same code in Kotlin like this:

As explained in the docs:

The by-clause in the supertype list for Delegate indicates that b will be stored internally in objects of Delegate, and the compiler will generate all the methods of B that forward to b.

Kotlin also offers delegated properties, a property that delegates its getter (and its setter if a var) to "something else". A delegated property also uses the by keyword. A couple of out-of-the-box delegates are available through the standard library.

Your Own Delegated Property

If you want to create your own delegated property, it needs to point to a class that has:

As an illustration, let's implement a distributed cache delegated property based on Hazelcast IMDG.

Using the above delegate is straightforward:

The delegate pattern is ubiquitous in the Object-Oriented Programming world. Some languages, such as Kotlin, provides a native implementation. But delegation doesn't stop at the class level. Kotlin does provide delegation at the property level. It provides some out-of-the-box delegates, but you can easily create your own.

Originally published at A Java Geek on April 18th, 2021