At the first-ever event at the Steve Jobs Theater in Cupertino, California, Apple made some big announcements updating their product line, specifically the 10th annual iPhone launch. Most people were expecting and looking forward to the unveiling of iPhone 8 and 8 Plus, but Apple surprised audiences by revealing the iPhone X (pronounced as 10) as well.

The first thing you notice about the iPhone X is its new design. In lieu of a home button and bezels, the 5.8 inch OLED display is almost entirely screen. Apple also traded in the aluminum structure for glass and stainless steel to make it more durable, waterproof, and dust resistant.

Not only has the look of the iPhone changed - Apple is completely rethinking the ways we'll be able to interact with our devices in the future. One of the most talked about features is the iPhone X's FaceID. Since there will be no physical home button, developers had to find a new way to allow users to unlock their screen instead of with their fingerprint - what better than with your face? The True Depth camera system can detect and recognize a user's face from any angle, so you can basically unlock your phone with a selfie.

A few other features people are excited about on the iPhone X include longer battery life, animated emojis (Animojis) that can mimic your expressions, wireless charging, and 12MP dual rear cameras with Portrait Lighting effects.

As far as the iPhone 8 and 8 Plus goes, changes were a bit less outstanding. While a similar all-glass design is implemented, the phones both have bezels and some have observed that they look similar to the 7 and 7 Plus. Like the X, the iPhone 8 also has wireless charging, True Tone display, an A11 Bionic smartphone chip to power AR apps, and a more advanced camera with Portrait Lighting and Optical Zoom.

While a price increase is somewhat expected due to the top-of-the-line features and innovative technologies, some consumers are finding it doesn't justify the price when all they really wanted was the headphone jack back.

Additionally, designers, developers, and testers may find a hard time adjusting former web applications to work for the iPhone X interface. Thinking about the way it renders and displays web pages in the browser will prove a challenge with a longer screen that has no bezels. This goes to show that as devices become more advanced and diverse in the future, testing for different interfaces will become increasingly important. 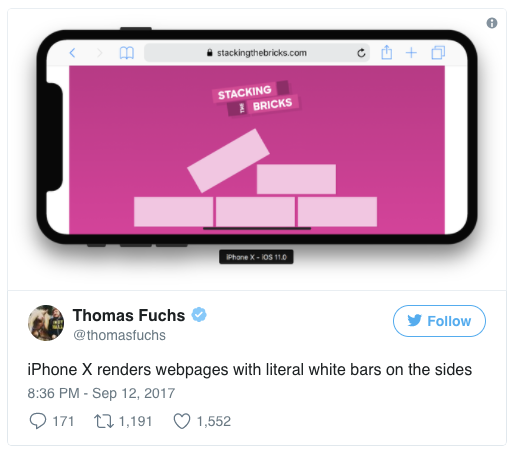 No matter how harshly people critique the iPhone X though, almost everyone can agree Tim Cook presented some pretty ingenious new features, and we know when November 3 hits, the line at Apple will be out the door.