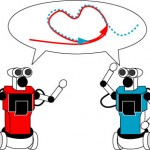 whilst robots have been able to perform an increasingly impressive array of tasks, but many of these implementations have retained an arms length from humans.

a recent mit project highlights the growing possibility of robots and humans not just working side by side, but working collaboratively together.

a central problem for machine-human collaboration is the sheer volume of information both generated and processed by machines.  the recent csail paper reduces the need for communication by 60%, thus making it easier for humans and robots to work together.

“we haven’t implemented it yet in human-robot teams,” the authors say. “but it’s very exciting, because you can imagine: you’ve just reduced the number of communications by 60 percent, and presumably those other communications weren’t really necessary toward the person achieving their part of the task in that team.”

of course, this increase in efficiency is also important for robot-to-robot collaboration as communication is a cost in terms of energy and processing power.

in any multi-agent system, each agent must maintain its own model of the world, as well as the model each other agent has.  there is also an expectation that the agent checks their model for accuracy so that behaviors can be modified.

as you can imagine, it doesn’t take much for this to quickly develop into an information deluge.  whilst this may be acceptable of the information updates are crucial, if they’re non-essential then it can introduce considerable overheads with little real purpose.

the method used to reduce this is known as a decentralized partially observable markov decision process, or dec-pomdp.

this utilizes a level of uncertainty to consider both whether the agent’s view of the world is correct, but also whether that of it’s peers is correct too.

the team had developed their system with emergency response in mind, so they had to work particularly hard to develop it such that it would work in completely virgin territories.

being able to map the environment on the fly in such a multi-agent environment is a particular challenge, so the system was built to ignore any uncertainty about the effectiveness of possible actions.

so, for instance, an agent might acquire a new piece of information that a pathway is blocked.  it can then choose to ignore this, use it but not share it with others, or use it and share with others.

each of these options has a cost attached to it. for instance, communicating the choice to others is a clear cost, but so to is not communicating as this makes it harder for other agents to estimate the world-view of the original agent.

as such, the system imparts a cost-benefit analysis for each circumstance that enables the agent to behave in an optimum way.

over 300 rescue simulations were undertaken, with the new system capable of achieving tasks with a success rate between 2-10% higher than existing models, albeit with a 60% reduction in communication levels.

“what i’d be willing to bet, although we have to wait until we do the human-subject experiments, is that the human-robot team will fail miserably if the system is just telling the person all sorts of spurious information all the time,” the authors propose. “for human-robot teams, i think that this algorithm is going to make the difference between a team that can function effectively versus a team that just plain can’t.”

the approach was modelled on previous studies that asked humans to execute similar rescue missions, with their communication styles used to design the automated approach.

“it is well-understood that in human teams, when one team member gains new information, broadcasting this new information to all team members is generally not a good solution, especially when the cost of communication is high,” the authors conclude. “this work has applications outside of multiagent systems, reaching into the critical area of human-agent collaboration, where communication can be costly, but more importantly, human team members are quickly overloaded if presented with too much information.”