In this blog post, we’ll highlight how all the basic commands you end up using in the first few minutes after installing PostgreSQL are identical in YugabyteDB. We’ll cover connecting to the database, creating users, databases, schemas, and calling external files from the SQL shell. In the next blog post in this series we’ll tackle querying data to demonstrate that if you know how to query data in PostgreSQL, you already know how to do it in YugabyteDB.

First things first, for those of you who might be new to either distributed SQL or YugabyteDB…

Distributed SQL databases are becoming popular with organizations interested in moving data infrastructure to the cloud or cloud-native environments. This is often motivated by the desire to reduce TCO or move away from the horizontal scaling limitations of monolithic RDBMS like Oracle, PostgreSQL, MySQL, and SQL Server. The basic characteristics of Distributed SQL are:

YugabyteDB is only slightly more involved than getting PostgreSQL up and running. At the end of the day it should only take a few minutes or less depending on your environment. Let’s look at a few scenarios:

Note: If you want to run 3 local nodes instead of a single node for either the Mac or Linux setups, just tweak the last command so it reads:

For more information on other installation types and prerequisites, check out the Quickstart Docs.

Connecting to a YugabyteDB Cluster

Assuming you are in the YugabyteDB install directory, simply execute the following to get to a YSQL shell:

Assuming you are connected to the Kubernetes cluster via the Google Cloud Console, execute the following.

Check out the documentation for more information about YugabyteDB’s PostgreSQL-compatible YSQL API.

Note: In the example above we assume YugabyteDB’s YSQL API is being accessed at 11.22.33.44 on the default port 5433, using the default user “yugabyte” with the password “password”. For more information about YugabyteDB connectivity options check out the Drivers section of the documentation.

Setting Up Users in YugabyteDB

Creating roles/users, and assigning them privileges and passwords is going to be the same in YugabyteDB as it is in PostgreSQL.

Create a Role with Privileges

For more information about how YugabyteDB handles users, permissions, security, and encryption check out the Secure section of the documentation.

Creating Databases and Schemas in YugabyteDB

Creating databases and schemas in YugabyteDB is identical to how it is done in PostgreSQL.

Switch to a Database

Create a Schema for a Specific User

If you have DDL or DML scripts that you want to call from within the YSQL shell, the process is the same in YugabyteDB as it is in PostgreSQL. You can find the scripts used in the examples below in the "~/yugabyte-2.3.x.x/share" directory. For information about the sample data sets that ship by default with YugabyteDB, check out the Sample Datasets documentation. 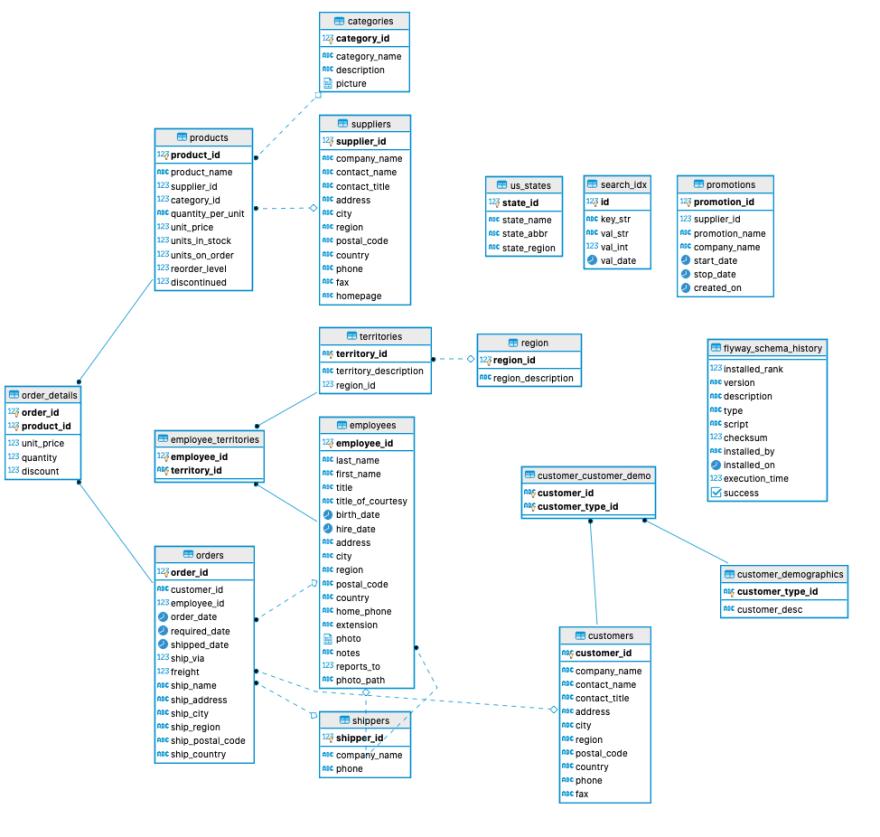 Call an External File to Load Data into the Objects

Stay tuned for part 2 in this series where we’ll dive into querying data from a YugabyteDB cluster using familiar PostgreSQL syntax.