Recently, I was working on an edge computing demo[1] that used ML (machine learning) to detect anomalies for a manufacturing use case. While I had a generic understanding of what ML is, I lacked the practitioner's understanding of how to use it. Similarly, I’d heard of Jupyter Notebook and was vaguely aware that it was connected with ML, but didn’t really know what it was and how to use one. This article is geared towards people who just want to understand ML and Jupyter Notebook. There are plenty of great resources available if you want to learn how to build ML models.

Caution: If you’re a data scientist then this article is not for you! We’ll be using very simple analysis techniques to serve as a teaching aid.

We’ll be learning about Jupyter Notebook by building a machine learning model to detect anomalies in the vibration data for pumps used in a factory. An example notebook will be used to explain the concepts and workflow.

The Jupyter Notebook combines software code, computational output, explanatory text, and rich content in a single document. Notebook allows for in-browser editing and execution of code and displays results of computations. It is saved with the .ipynb extension. Jupyter Notebook supports dozens of programming languages with its name reflected by Julia (Ju), Python (Py), and R.

You can try a notebook by using a public sandbox or enabling your own server like JupyterHub.

JupyterHub is used to serve notebooks for multiple users. It spawns, manages, and proxies multiple instances of the single-user Jupyter Notebook server. In this example, JupyterHub will be running on Kubernetes.

When the notebook server is first started, a new browser tab is opened showing the notebook dashboard. The dashboard serves as a home page for the notebooks. Its main purpose is to display the portion of the filesystem accessible by the user, and to provide an overview of the running kernels, terminals, and parallel clusters.

The dashboard has the following components:

The files tab provides a view of the filesystem accessible by the user. This is typically rooted to the directory in which the notebook server was started.

The running tab displays the running notebooks which are known to the server.

Working With a Notebook

When a notebook is opened, a new browser tab will be created which presents the notebook's user interface (UI).

The body of a notebook is composed of cells. Each cell contains either markdown, code, or raw text. Cells can be included in any order and edited at-will.

You read the text cells and run the code cells.

The notebook user interface is modal. This means that the keyboard behaves differently depending on the mode of the notebook. A notebook has two modes: edit and command.

Edit mode: Indicated by a green cell border and a prompt in the editor area. When a cell is in edit mode, you can type into the cell, like a normal text editor.

Command mode: Indicated by a blue cell border. When in command mode, keyboard shortcuts can be used for performing notebook and cell actions. For example, pressing shift+enter in command mode will execute the current cell.

Code cells are run in order, i.e. a code cell is run only after all the code cells preceding it have already been run.

To run a code cell:

Getting Started With a Notebook

Jupyter Notebook supports many programming languages, we’ll be using IPython in this example. It uses the same syntax as Python, but provides a more interactive experience. We’ll need the following Python libraries to help with mathematical computations needed for ML:

We’ll be using the MANUela ML model [2] as a notebook example to explore various components needed for machine learning. The data used to train the model is located in the raw-data.csv file.

The notebook follows this workflow:

Let's import the required Python libraries, convert the raw data file (raw-data.csv) into the DataFrame with timeseries, an id for the pump, vibration value, and a label indicating an anomaly.

Let's visualize the DataFrame. The upper graph shows a subset of the vibration data. The lower graph shows (manually) labeled data with anomalies (1 = anomaly, 0 = normal). These are the anomalies that the machine learning mode should detect. 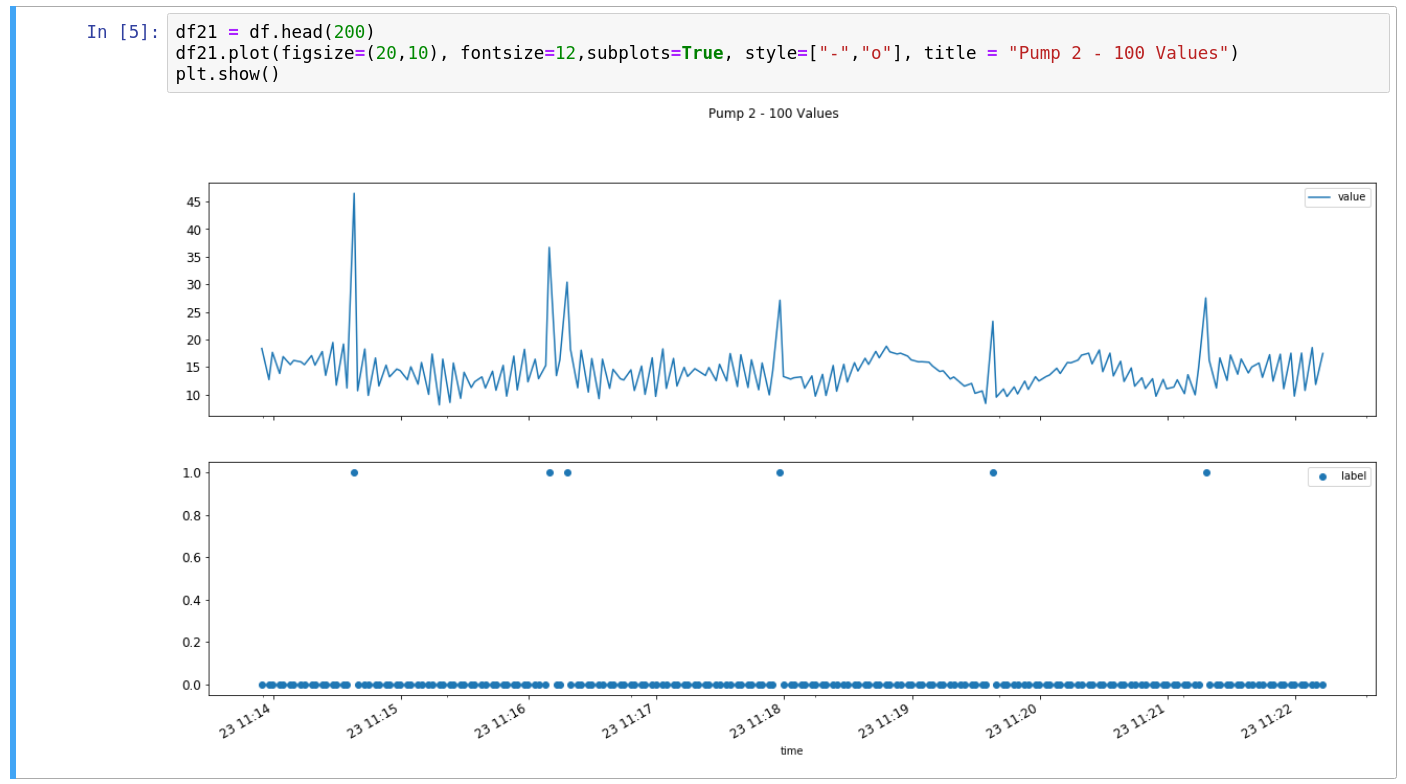 Before it can be analyzed, the raw data needs to be transformed, cleaned and structured into other formats more suitable for analysis. This process is called data wrangling or data munging.

We’ll be converting the raw time series data into small episodes that can be used for supervised learning.

We need to convert the above data into a new DataFrame with episodes where length = 5, as shown in the example below:

Let’s now convert our timeseries data into the episodes as shown in the example above:

Let's explore data with episodes of length 5 and the label in the last column: 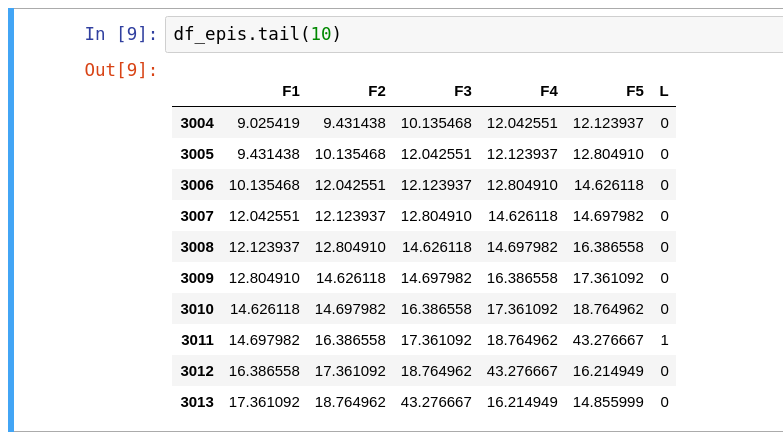 Note: In the above example, the column F5 is the latest data value where column F1 is the oldest data for a given episode. The label L indicates the presence of a new anomaly.

The data is now ready for supervised learning.

Like many ML libraries, Sklern requires separated feature (X) and target (Y) columns, so let’s split our data into feature and target columns.

It’s a good practice to divide your data set into two subsets:

Our goal is to create a model that generalizes well to new data. Our test set will serve as a proxy for new data. We’ll be splitting the data set into 67% for the training sets and 33% for the test set.

We can see that the anomaly rate for both training and test sets is similar, i.e. data set is divided pretty evenly.

Decision Trees are a supervised learning method used for classification and regression. The goal is to create a model that predicts the value of a target variable by learning simple decision rules inferred from the data features.

We’ll be using DecisionTreeClassifier, which is a class capable of performing multi-class classifications on a dataset, although in this example we’ll be using it for a single class classification. DecisionTreeClassifier takes two arrays as input: array X as features and array Y as labels. After being fitted, the model can then be used to predict the labels for the test data set.

We can see that the model achieves a high accuracy score.

Save the model and load it again to validate that it works.

Step 7: Inference With the Model

Now that the ML model is created, we can use it for inferencing on real time data.

In this example, we’ll be using Seldon to serve the machine learning model.

In order for our model to run under Seldon, we need to create a class that has a predict method. The predict method can receive a NumPy array (X) and return the result of the prediction as a:

Finally, let’s test if the model can predict an anomaly for a list of values.

We can see that the model achieves a high score for inferencing as well.

Now that we're familiar with how to use Jupyter Notebook, we can further explore other ML models in the future article(s).