The idea of this article is to understand NoSQL databases, its properties, various types, data model, and how they differ from standard RDBMS.

The RDMS databases are here for nearly three decades now.  But in the era of social media, smart phones and cloud, we generate large volume of data, at a high velocity.  Also the data varies from simple text messages to high resolution video files.  The traditional RDBMS could not able to cope up with the velocity, volume and variety of data requirement of this new era.  Also most of the RDBMS software are licensed and needs enterprise class, proprietary, licensed hardware machines.  This has clearly let way for Open Source NoSQL Databases, where the basic properties are dynamic schema, distributed and horizontally scalable on commodity hardware.

NoSQL is the acronym for Not Only SQL.  The basic qualities of NoSQL databases are schema-less, distributed, and horizontally scalable on commodity hardware.  The NoSQL databases offers variety of functions to solve various problems with variety of data types, where "blob" used to be the only data type in RDBMS to store unstructured data.

NoSQL databases allows schema to be flexible. New columns can be added anytime.  Rows may or may not have values for those columns and no strict enforcement of data types for columns. This flexibility is handy for developers, especially when they expect frequent changes during the course of the product life cycle.

NoSQL databases support any type of data.  It supports structured, semi-structured, and unstructured data to be stored.  Its supports logs, images files, videos, graphs, jpegs, JSON, XML to be stored and operated as it is without any pre-processing.  So it reduces the need for ETL (short for Extract — Transform — Load).

NoSQL databases not only depend on SQL to retrieve data. They provide rich API interfaces to perform DML and CRUD operations. These APIs are more developer friendly, and supported in a variety of programming languages.

Key-Value databases are developed based on the Dynamo whitepaper published by Amazon.  Key-Value database allows the user to store data in simple <key> : <value> format, where key is used to retrieve the value from the table.

The table contains many key spaces and each key space can have many identifiers to store key value pairs.  The key-space is similar to column in typical RDBMS and the group of identifiers presented under the key-space can be considered as rows.It is suitable for building simple, non-complex, high available applications.  Since most of Key Value Databases support in memory storage, can be used for building cache mechanism. 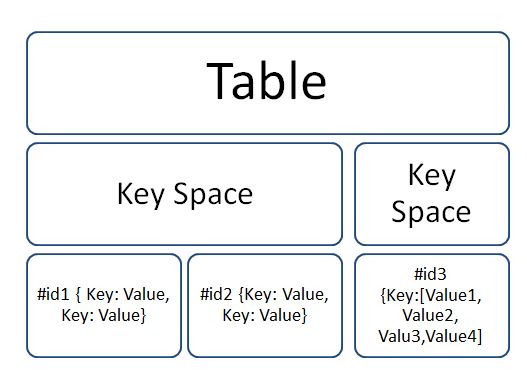 Column oriented databases are developed based on the Big Table whitepaper published by Google.  This takes a different approach than traditional RDBMS, where it supports to add more and more columns and have wider table.  Since the table is going to be very broad, it supports to group the column with a family name, call it "Column Family" or "Super Column".  The Column Family can also be optional in some of the Column data bases.  As per the common philosophy of NoSQL databases, the values to the columns can be sparsely distributed.

The table contains column families (optional).  Each column family contains many columns.  The values for columns might be sparsely distributed with key-value pairs.The Column oriented databases are alternate to the typical Data warehousing databases (Eg. Teradata) and they are suitable for OLAP kind of application. 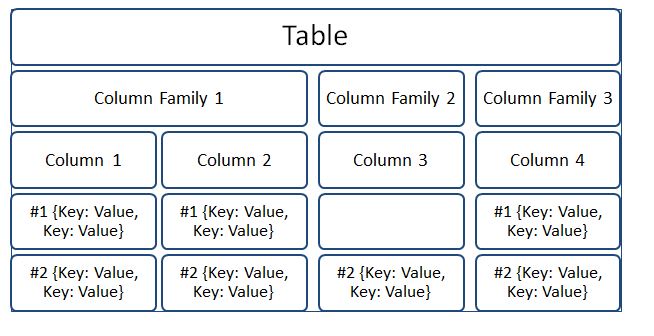 Document oriented databases offer support to store semi-structured data.  It can be JSON, XML, YAML, or even a Word Document.  The unit of data is called a document (similar to a row in RDBMS).  The table which contains a group of documents is called as a "Collection". 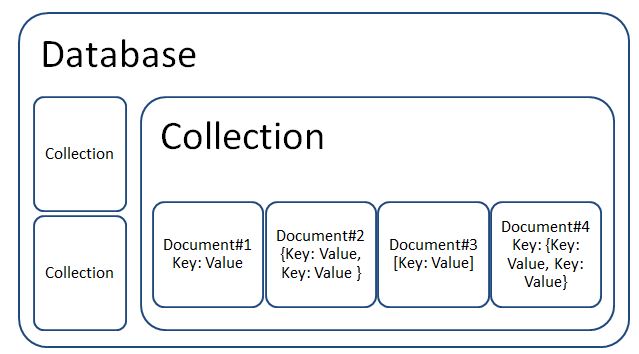 The graph database is the two dimensional representation of graph.  The graph is similar to a table.  Each graph contains Node, Node Properties, Relation and Relation Properties as Columns.  There will be values for each row for these columns.  The values for properties columns can have key-value pairs. Graph databases are suitable for social media, network problems which involves complex queries with more joins. 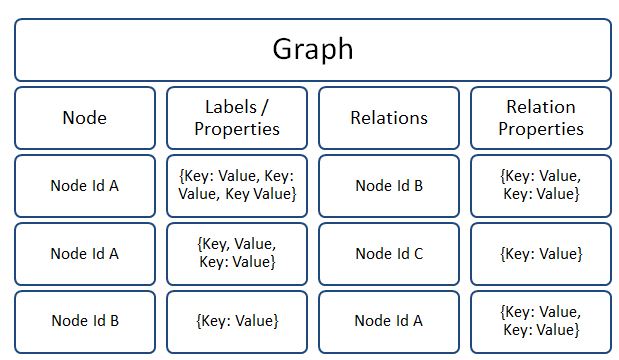 Following are the important areas to be considered while choosing a NoSQL database for given problem statement.

Some NoSQL databases do not support Structured Query Language, they only support an API interface.  There is no common standard for APIs.  Every database follows its own way of implementing APIs, so there is a overhead of learning and developing separate adaptor layers for each and every databases.  Some NoSQL databases do not support all standard SQL features.

Due to the nature of the schema or data model, not all NoSQL databases support JOIN operations by default, whereas in RDBMS JOIN operation is a core feature.  The query language in Couchbase supports join operations.  In HBase it can be achieved by integrating with Hive.  MongoDB does not support it currently.

Most of the NoSQL databases take the leeway suggested by CAP theorem and they support only any two properties of Consistency, Availability, and Partition.  They do not support all three qualities. [Note: Please refer appendix to know more about CAP theorem].

Appendix A Theories behind Databases

ACID is an acronym for Atomicity, Consistency, Isolation, and Durability.  These four properties are used to measure the following:

Atomicity means that the database transactions must be atomic in nature. It is also called all or nothing rule. Databases must ensure that a single failure must result rollback of the entire transaction until the commit point. Only if all transactions are successful the transaction must be committed.

Databases must ensure that only valid data must be allowed to be stored. In RDBMS, it is all about enforcing schema. In NoSQL the consistency varies depends on the type of DB. For example, in GraphDB such as Neo4J, consistency ensures that relationship must have start and end node. In MongoDB, it automatically creates a unique rowid, using a 24bit length value.

Databases must ensure that committed transactions are persisted into storage. There must be appropriate transaction and commit logs available to enforce writing into hard disk.

The CAP theorem states that any networked shared-data system can have at most two of three desirable properties.  They are : Consistency, Availability and Partition tolerence.

In a distributed database system, all the nodes must see the same data at the same time.

The database system must be available to service a request received. Basically, the DBMS must be a high available system.

The database system must continue to operate despite arbitrary partitioning due to network failures.