Almost all modern applications require storing and accessing data, but choosing the right database to power an application is a difficult task that involves reasoning about a complex set of tradeoffs. Developers typically need to think about the following:

These dimensions are all important, but latency stands apart from the rest because it is the most difficult to reason about and it is often impossible to engineer around. Low latency is also growing in importance as business logic moves to the edge, making the difference between a local and remote API call more jarring and disruptive to users.

Defined simply, latency is the total amount of time that it will take for the database to receive a request, process the underlying transaction, and return the correct response. This definition implies that you can only determine the latency of a particular database if you view it through the lens of the application: where it will send requests from, the type of transactions it will need to run, etc. You cannot evaluate whether a database will meet your latency goals without considering it in the context of your application, making synthetic or best-case-scenario benchmarks unhelpful.

In this post, I’ll share a high-level framework that we use when helping developers think about latency. Then I’ll assess how Fauna does with respect to that framework.

Latency Starts With the Application

Databases exist to power applications, so database evaluation must begin by considering application architecture. For the last few decades, most applications have been built using a three-tier architecture where the website or mobile app (called the presentation layer, but can be thought of as the software running on the client) communicates with an application server (called the application or business logic layer) that handles aggregating data from the databases (called the data layer) backing the application. But modern applications are increasingly moving towards a new client-serverless architecture where presentation logic runs on the client and business logic is encapsulated in the database which is accessed (along with other backend services) through an API. This architecture provides an opportunity to reduce latency by eliminating the need to go through a centralized application server and allowing databases to push data closer to the edge.

Once the request reaches the database edge, the first point where the infrastructure owned or provided by the database vendor handles the request, the database needs to decode the wire protocol, authenticate the user, and parse the query expression. After this, a database will typically perform a number of query handling steps before returning a response including processing compute operations associated with the underlying transaction, replicating data to other regions or replicas, and pulling required data from storage. I’ll call this time between receiving a request and returning a response where a database is handling the query internal latency. Note that not every database performs all of these steps.

For example, an in-memory caching node that receives a written request may not replicate synchronously, or at all, to other regions, and may not even write to its local disk. However, a distributed transactional database will need to replicate durably and semi-synchronously to multiple remote regions before responding to the application, because it guarantees a higher level of availability and consistency.

Finally, the response that is returned by the database must travel through intermediate machinery back to the application, which also accrues towards external latency. 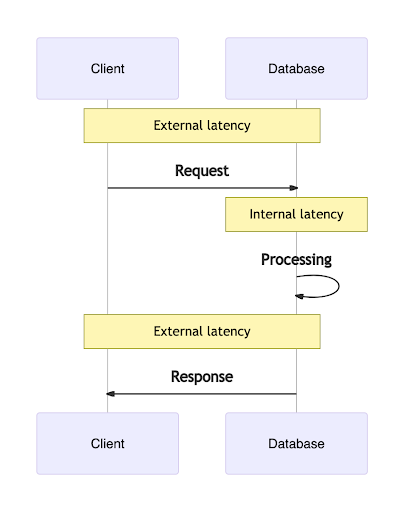 Why does the distinction between internal and external database latency matter?

First, although most benchmarks measure internal latency only, database latency is more than internal latency in practice. If you’re building an application for a global customer base and backing it with a single-region application server and database, some customers may see 500+ milliseconds of latency for every request even if the database itself is infinitely fast.

Second, different architectures trade-off other important database selection criteria like consistency, availability, scalability, and variance to achieve different latencies. For example, an eventually consistent database that asynchronously replicates data across regions may have lower internal latency numbers, but it leaves the application responsible for correctness edge cases. This can have the paradoxical effect of increasing latency if the application has to make extra requests to double-check that the data is durable and correct, or if the application fails to do so, customers may receive an incorrect response.

In another example, a simple key/value store may offer very low average latency. But the fact that it can’t handle compute within the request may result in higher overall latency due to the many round trips required from the application to perform the same work that a database with a less constrained API could perform in a single transaction close to the data.

A Framework for Comparing Latency

Instead of relying on simplistic benchmarks, I suggest applying the following framework to help you think about latency:

To be more specific, you can calculate the expected latency by looking at your users and applying the formula:

Let’s apply our latency framework to Fauna — a serverless, geographically distributed, strongly consistent, transactional database that is consumed as an API. Under the hood, Fauna uses Calvin to batch transactions and apply them across regions. This means that writes can take longer than a single node database because they must be applied to a majority of regions within a Region Group, but consistent reads are faster than a single node database because they can be served out of the nearest region.

To evaluate Fauna’s latency, let’s consider a hypothetical example where we’re building an application for customers across the United States, with 50% of users in Seattle and 50% in Miami; a pair of representative West and East Coast cities. Our application will be deployed to mobile devices using a client-serverless architecture where application logic runs on the client and clients make direct calls to the database. Let’s assume that we’re considering using a database in Fauna’s US Region Group and that latency is our primary evaluation criteria for a database.

Fauna’s US Region Group currently replicates data across three regions. This means that customers on both coasts will see average external latencies of <20 milliseconds before requests reach the database edge in Oregon or Virginia.

Fauna allows arbitrary computation over your data, so internal latencies are highly variable depending on the nature of the transaction underpinning a request. However, simple reads and writes are easy to reason about. For reads, Fauna simply returns requested values from the local region. For writes, Fauna synchronously assigns orders to the transaction by writing it to the global transaction log, which requires a round trip to the next nearest region in the topology so that a majority of regions have recognized the write. 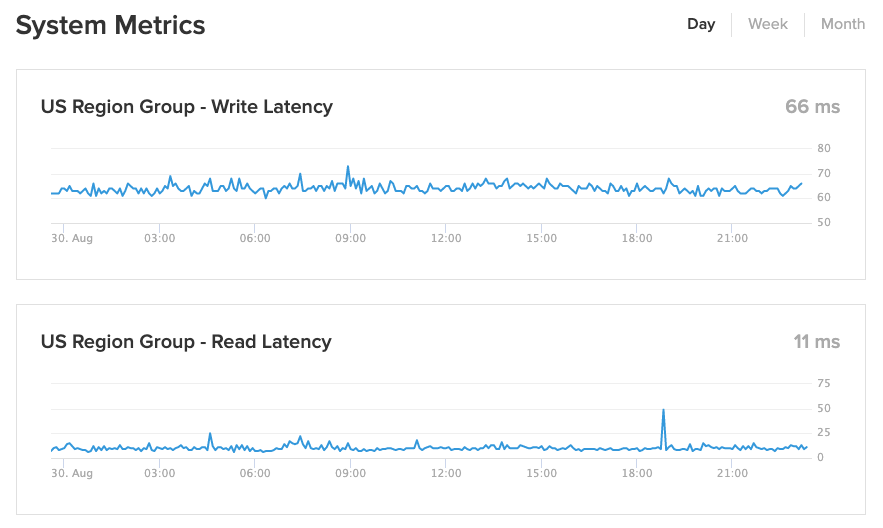 We can plug these values into the formula provided above to come up with the following average expected latencies:

Let’s consider how these metrics stack up against a hypothetical database that we’ll call FloraDB running in Virginia. FloraDB is a traditional, single-region database. Let’s assume it’s running on a single physical node and offers 5 milliseconds of average internal latency on both reads and writes, which is typical for an RDBMS.

Again, we can apply the formula above to generate projected average latencies:

The following table captures all of the projected latencies above for easier comparison:

Note that reads from Seattle to FloraDB take roughly 5x as long as reads to Fauna because the request has to travel across the country. A synthetic write benchmark driven from a node in Virginia would not give an accurate impression of the user experience of using either database; it would discount the negative impact of external latency when using FloraDB, as well as the positive impact of Fauna applying a transaction across regions in a Region Group by default, even though the benchmark would technically make FloraDB appear to be 10x faster for writes.

Latency is an important but complicated topic for developers to think through. In a distributed world, there is no single metric that accurately represents the latency of a specific database for all use cases.

I recommend starting by thinking about the application that you’re building, making predictions about the internal and external latencies that your application is likely to experience based on published metrics and the locations of your users, and then validating those projections with your own testing.

For most real-world applications, using a database that makes data available close to users on the edge is an attractive proposition, resulting in both lower average latencies and lower latency variances.

Published at DZone with permission of Tyson Trautmann. See the original article here.