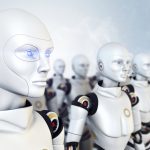 robotics, as an industry, has been around for approximately 50 years now, but it’s perhaps fair to say that the last few of these have seen a tremendous growth, both in the range of tasks robots can perform and the number of robots in operation.

back in 2009, a consortium of academics and industry figures produced a roadmap for robotics that looked at how things may evolve. an updated version of the roadmap has recently been published that makes interesting reading for anyone in the industry.

it’s perhaps pertinent to start on an optimistic note, because, despite widespread rumors of machines taking our jobs, the report begins by revealing that despite a huge number of new robots entering the ‘workforce,’ there have still been 600,000 new jobs in manufacturing in the past few years.

a major advance in modern robotics has been their ability to work safely alongside humans, and even to collaborate effectively as part of a robot-human team. indeed, a number of iso standards have emerged to help provide such a collaborative framework to help designers ensure their machines are capable of working with others effectively.

a combination of iot-based sensors and cheaper, more powerful computing has significantly increased the capabilities of robots, making them both more capable and more flexible to a range of circumstances. despite this progress, the authors contend that a lot more work needs to be done to ensure machines have control systems that are fit for modern work environments, and especially allow operability with minimal training on the part of their human ‘co-workers’. this will probably require significant work on better human-robot interaction systems.

the paper goes on to discuss some of the current limitations in the ability of robots to grip delicate items and also manipulate them in a dexterous way. it’s a topic i’ve touched on a few times recently, especially with the growing capabilities of robotic surgeons , who are required to operate with perhaps the highest level of dexterity possible.

probably the biggest growth in the use of robots has been in logistics, with e-commerce driving adoption of the technology, whether for the management of warehouses or the last mile delivery of packages to customers. the huge variety of packages requires an intuitive understanding of the grasping and manipulation requirements for these different package sizes and weights.

central to this growth has been the new standards that have emerged as part of both industry 4.0 and the industrial internet of things, both of which facilitate cheap communication and also new architectures for distributed computing. industrial iot will give a new level of intelligence and sensing to robots, and it’s likely, therefore, to significantly improve the user experience.

for this to happen, however, our schools need to be equipped to ensure humans are adept at both designing such robotic systems, but also working alongside them. as i’ve mentioned before, this training should not be confined to school age children, but be something available to broader society.

lastly, of course, the paper advocates the need for government to get a handle on the growth in robotic capabilities, to ensure that development is not stifled whilst also ensure that humans are never put at risk by the robots that are an increasing part of our lives.

the report provides a number of use cases of robots in society, ranging from manufacturing to healthcare, professional services to the home. it also attempts to bring together the latest research in a number of areas to provide a unified perspective on both the state of robotics today and the challenges it will face in the future.