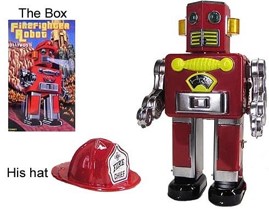 A Robot Firefighter that wears a Fitbit for you (so you can get a discount on your insurance), and drives an Uber (to make you some additional cash), to the grocery store to do all of your shopping (so you don’t have to… unless you want to)

Or, as so envisioned during an afternoon session at IoT Nexus in San Francisco.

Three panelists were put on the spot and asked to provide their thoughts, and justification, on what would be the most useful, or best, IoT solution available in 2020.  One panelist said that the wearing of Fitbits with monitoring by Insurance Companies would be in wide-use because of the cost-benefit that Insurers would provide by discounting the rates on said wearer’s policies when they opted-in to health monitoring.  The next panelist said that grocery store shopping, as we know it (i.e. actually going to the store), would be a thing of the past. The third panelist said that robot firefighters would bee the most “audacious” IoT Solution to be deployed in the year 2020.  The audience was invited to query the panelists, and/or submit their own ideas, and then vote on the best idea. Since RoboMQ provides integration services with any-to-any connectivity in the IoT industry, I could not resist. I jokingly submitted my “original” integrated idea… robot firefighters wearing monitored Fitbits, that drive Ubers, and go to the store to do your shopping.  Chuckles from the audience ensued.

IoT Nexus was a relatively intimate gathering of executive thought-leaders in the IoT industry. It included technology heavyweights, such as IBM, Cisco, Ericsson, GE, Bosch, HP Enterprise, SAP, NetApp and Schneider Electric.  Although few in numbers, there was at least breadth from the healthcare/mHealth perspective provided by Johnson & Johnson, Lim Innovations, Esurance and ReelDX. Lowe’s delivered a decent snapshot of the residential, do-it-yourself IoT space. Lighting, er sorry… I mean Intelligent Illumination, was well represented by Digital Lumens, Enlightened, Lunera and Sengled. And, as is appropriate for events such as this, there were panels that included industry standards and regulatory insights and commentary from the Industrial Internet Consortium, oneM2M, and the Federal Trade Commission. The rest of the attendees included startups like RoboMQ, end-to-end IoT/M2M communications and solutions companies like Numerex, advisors, analysts, manufacturers, VC companies, and more.

Needless to say, all of the bases in the IoT Universe were pretty much covered.  Here were some of my key takeaways:

I believe that there is pretty much universal agreement that saving and/or protecting lives is considered one of the greatest experiences possible. And, while the robot firefighter did not get the most votes for the best IoT choice that afternoon, in retrospect, maybe it should have.  What is also interesting is that we can look at the evolution of the robot firefighter in a couple of ways.  First, as a fire sprinkler system that started out as a relatively basic concept (perhaps even invented by Leonardo da Vinci in the 15th century), having technological innovations applied over the ages, including M2M enablement, and now can be delivered as a “Smart” IoT device within a “Smart” Fire Prevention and Protection Ecosystem.  Secondly, the mechanization, or roboticization (roboticized is in the Oxford Dictionary so I’m granting myself leeway here), of something that can keep an actual human firefighter either out of harms-way, or at least, as far away from a fire as possible. So, when you see the robot firefighters being developed and deployed under the US Navy’s SaFFir Project, or Howe and Howe’s Thermite, you can’t help but think, “Wow, robot firefighters are awesome!”

So, at the end of the day, what will be the best IoT solutions deployed in 2020 and beyond?  Well, in my mind, the most successful solutions will undoubtedly be based on the groundwork that is being laid today.  I believe that we will even take some things for granted, such as going straight to your hotel room or into a movie, avoiding the check-in or ticket lines, by using your smart phone communicating with IoT devices. If I can wear a fitbit or buy a smart car, that talks to objects and other cars, that will significantly lower my insurance, it sounds like a good plan.  If there are IoT devices that will prevent destruction and/or save lives... even better. Regardless, the IoT solutions that will likely become the most pervasive are those that create the best experiences and the most positive outcomes in the consumer and commercial business world  moving forward.

Published at DZone with permission of Marshall Cromwell. See the original article here.