It supports ARM and x64-based edge gateways and machines, and offers low-latency analytics that combine data streaming and time-series data, with in-database machine learning and support for graph data.

I was first made aware of this edition at the MVP Summit earlier this year, and I need to clear some things up for folks who might be confused about the name and who it's for.

Firstly, recall that Azure means "hybrid" now, so while we might expect that it refers to cloud computing, it also takes on-premises infrastructure into account.

Secondly, this is the full SQL Server database engine running on a 64-bit ARM CPU. It could run on a Raspberry Pi, or — provided there was support for the other hardware — Android or iOS devices, however, it is geared towards edge devices that gather data from IoT sensors and other data points. Think of this as one step up from the IoT devices capturing data in the field, whether it be wine-making, oil and gas, manufacturing, you name it.

As I mentioned previously, it is the full SQL Server engine. So why not call it SQL Server Edge then? That's because it's not just SQL Server. One feature requested for inclusion in SQL Server by various people over the years is time series support. Instead of building it into the database engine, Microsoft has incorporated time series support from the analytics stuff they already built for Azure. This is where the Azure branding comes in because it fits right into the sphere of the Azure IoT service offering.

It's still a full version of the SQL Server database engine (yes, including columnstore and in-memory OLTP), running on 64-bit ARM CPUs, which benefit from reduced power usage, improved battery life, and all the other reasons we like ARM. It's just SQL Server, on Linux, on tiny computers that can run anywhere. This greatly reduces the effort to write data management software because now we can target just one data platform from the edge to the cloud and everything in between.

Sure, SQLite is a really fast single-user database, but it's not the full SQL Server engine.

Naturally, this raises questions around licensing. While it has not been announced yet, Argenis Fernandez has said, "It's not licensed the same way SQL Server is," and that's good news if you're concerned about core-based licensing. 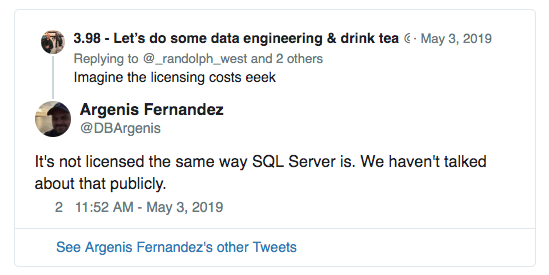 I'm extremely excited by the prospect of this new edition of SQL Server.