the following is a guest article authored by karthikeyan (karthik) anbarasan. karthik is a microsoft mvp, microsoft rockstar in india, and also a nokia dev champion! today, he’s sharing with us some of his expertise in the realm of the internet of things (iot). this is a great introduction to get your feet wet and start understanding what iot is all about, so i hope you enjoy!

part 1: what is the internet of things?

lately, there’s been a lot of talk about mobile technology and the cloud, and there are a number of consumers who complete their day to day tasks with the help of the latest gadgets and the connectivity between them. why is that? well, it’s because the power lies in the cloud, which holds all of their data and they can access it whenever they’d like. however, while the number of users is rising exponentially due to the increase in oem’s and cheaper devices, unfortunately mobile devices still lag behind traditional desktops and laptops in terms of computing power and storage.

as a result, a number of manufacturers have created low cost, smaller, and more powerful devices which provide a platform that developers and enthusiasts can engage with, including more customized objects that can “speak” with each other and share information. with this significant growth, a huge number of these “smart” objects have paved the way for connecting our physical world with the internet – and so the “internet of things” (iot) was born. in short, the devices that surround us (such as computers, tablets, mobile phones, televisions, fitness equipment, vending machines, vehicles, and more) can now connect to each other and share data between them.

to get a practical overview on iot, let’s take a look at health trackers: small, wearable devices that keep track of your health information and transmit that information to the cloud, which we can then use to review and improve on our fitness goals. the same data that is transmitted can be used in multiple reports and can be tracked with multiple devices like your mobile phone, laptop, etc.

in general, the internet of things provides a more complex infrastructure than the existing technology growth that’s occurred in the recent past. with mobile being the current technology trend in the market, we can expect 10 times the growth of the iot industry in coming years. now the real challenge arises when mobile devices need to adhere to a particular form factor, and with iot there are hundreds of possible form factors to use in order to operate and share data correctly.

part 2: how does the internet of things work?

the internet of things is driven by a combination of steps and processes which are mandatory to perform a standard distribution of protocol across devices, including sensors, a network, and a device. 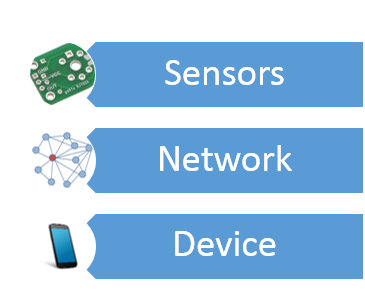 sensors are the integral first step towards setting up your iot environment. with the wide range of available sensors in the market, one needs to first understand which best suits the requirements of your end goal. some examples include sensors for temperature, weather, moisture, and more, all of which can be created by different manufacturers.

the network is the next key component, where your sensor’s inputs are digitalized and placed.

devices are the last components, where you see your data displayed in a report or some other visual way. this is not necessarily a mobile device, but rather any computing device which can provide an end result in a visually attractive way in order to analyze and update your data.

a combination of all these entities provides an end user a representation which is nothing but their data in a visual way. but that brings up a good question: how does the actual computation happen? multiple embedded-platform microcontroller boards must exist to connect these components. each of these boards serves a purpose, so you need to select your board based on your end goal. below are some of the high-end boards on the market for you to consider when starting your iot setup:

each of the above listed boards serve different purposes, and their base languages support specific technologies - for example the raspberry pi 2 model supports windows 10, parallel to raspbian or ubuntu as well.

part 3: so what’s the downside of the internet of things?

let’s consider home automation as an example. smart home technologies should work with the existing interfaces of the household items and connect them over the network to communicate and operate when required. if you need to illuminate a room from hundreds of miles away then it makes sense to control the lights with your smartphone, but think about if you want to turn on your bedroom light using your smartphone when you are in your bedroom. in this example you’ll need to pick up your smart phone, unlock your device, go to your smarthome app and flick the toggle switch. this has turned a simple one-step process (flick the switch on your bedroom wall) into a four step process - which is not very effective!

while this is an extreme example, we should keep in mind that the industry is constantly evolving. there will definitely be growth towards streamlining these processes and making it simpler for consumers to effectively work with an increasingly connected iot-centric world.