Up until recently, I was pretty sure how Node's Event Loop worked; in fact, I was sure I knew how asynchronous calls were handled.

Recently, thanks to a very interesting talk about this subject by Daniel Khan in last year's NodeConf, my eyes were opened to the truth. He has a very good explanation in that video, but I decided to go deep into Node's official documentation about it, and out of that came my own explanation of how this beast known as Event Loop works.

Spoiler alert: it's very similar to Daniel's, but in my case, the results from his tests were a bit different, so I added an extra explanation for it.

Essentially, the Event Loop works on phases; for every tick of the loop, it goes through a new phase. For every phase, it keeps a FIFO queue of callbacks, and it executes as many callbacks in that phase as it can (there is a limit to how many callbacks can be called on every tick).

There is a common misconception that the event loops handles all asynchronous functions with threads from Libuv (the library V8 uses to handle asynchronism). But it’s not exactly true; these threads are only used in special cases when there is no other way because modern OS and other systems, such as databases, already provide asynchronous interfaces, so the engine will try to use them and if there is no async alternative, it’ll resort to the thread pool.

The aforementioned phases are:

If you wanted to, there is a very interesting way to look into this, and test it on your own. Simply by using the following code, you’ll see how the execution is done internally:

Example showing the different phases for the event loop

The result from executing the above code is the following (note that this is in my computer; with Node version 8.1.3, results might vary on your side, but they should be similar nonetheless):

From these results, we can extrapolate the following behavior:

The following diagram attempts to present a graphical representation of the above events, starting from what would be step #3. 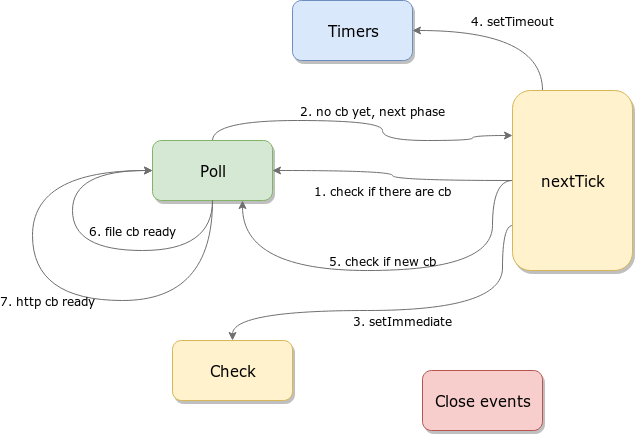 Diagram showing the transition between phases in the above code example

You can read more on the how the event loop works from the official documentation, but this should give you a basic idea of how it should work. You can tweak and change the code sample to see how the results change until you’re sure there is no witchcraft involved (I know it took me several attempts to get there).

Let me know if this cleared anything up for you or not. This is just an extract of one of the chapters of my upcoming book, REST API Design with Node.js, which should be coming out shortly, so if you're interested in reading more about Node.js, its event loop and REST APIs, visit my site at http://www.fernandodoglio.com.