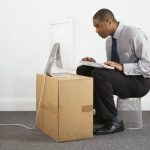 hot desking has always seemed to be something done to keep facilities managers happy rather than employees, and a recent study highlights the impact it can have on the wellbeing of employees.

the research examined the impact the implementation of hot-desking had on an organization over a three year period. the move had been undertaken in a bid to reduce the costs of its facilities, whilst also allowing the property it had to be used more flexibly.

while hot-desking can make sense from that point of view, it can make employees feel underappreciated, and even unwanted by their employer.

hot-desking: matching up with reality

advocates of hot-desking talk about the serendipitous encounters we make as we hunt the office for a desk, and our newfound ability to rub shoulders with parts of the organization we ordinarily wouldn’t see or interact with.  in theory, that’s great, but the reality is somewhat different.

the study found that it can impact people in different ways. for instance, it revealed that circumstances can significantly determine how desks get allocated.

for instance, if certain employees are able to arrive at work early they can ‘claim’ their desk, and by doing this often enough they almost take ownership of their space. these desks are often the best in the office, either in terms of location or proximity to key colleagues.

if, however, you’re one of those who cannot arrive early, you’re literally left with the runt of the litter. not only is your chosen abode of poor 'status,' it’s also likely that you’ll have to shift it around each time you come into work.

whilst the early birds tend to have their stuff already set out on ‘their’ desk, the late arrivers have to carry their things with them from desk to desk, unloading fresh each morning, causing a distinct divide in productivity levels.

isolation as a result of hot-desking

what’s more, by forcing people to sit alongside relative strangers, it replicates the kind of ‘civil inattention’ we typically see on trains and buses whereby we signal to others that are very close to us that we aren’t open for communication. it creates an environment where every day is akin to your first.

the researcher draws parallels with how homeless people tend to move around a city, constantly looking in vain for a place to call home. it’s a world where the ‘permanent’ population have already staked out the best spots, both for comfort and status.

of course, the situations aren’t really comparable, but the analogy helps to place hot-desking into a degree of context, which might encourage facilities managers to think again about implementing a strategy that leaves so many dissatisfied and rootless when they enter the office each day.