In Agile project delivery, a common escalation from the client is that "the feature with expected functionality is not delivered on time, even though we shared the expectations, well in advance." The application users may complain to a support executive that "the feature of the application is not functional, while a similar feature of other applications performs." In a nutshell, a well-planned and organized software development model is also facing a communication gap between the expectation and delivery.

ATDD is closely related to Behavior Driven Development (BDD), where the development team, QA team, and business analysists work together closely to understand the application's behavior. A ubiquitous language called “Gherkin” is used to gather the behavior of the proposed feature with the 'Given, When, Then' Format.

ATDD is a practice where the development team, business analysists, and QA team will collaboratively discuss the feature which they are planning to develop and to deliver in a short span of time. Acceptance Criteria, with examples, will be defined and distilled into a set of acceptance tests before the actual development starts. The developed feature will be considered as completed once the acceptance criteria have been fulfilled.

Acceptance Test Driven Development: How Does it Work?

As mentioned before, BDD uses a ubiquitous language called Gherkin in 'Given, When, Then' format, which helps BA/non-technical teams to describe the feature's behavior and its expected scenarios.

Gherkin is a business readable, domain-specific language created to describe the behavior of an application or feature. It is a line-oriented language that uses indentation to define the structure. Line endings terminate statements (called steps) and either spaces or tabs may be used for indentation.

Refer to the picture for a sample of a feature file prepared using the Gherkin language.

Open source tools are available in the market to perform Acceptance Test Driven Development. They are:

The ATDD implementation starts with features and their associated scenarios. Before starting the implementation, configure SpecFlow and Selenium with Visual Studio.

The following IDE/Tools are required for implementation: 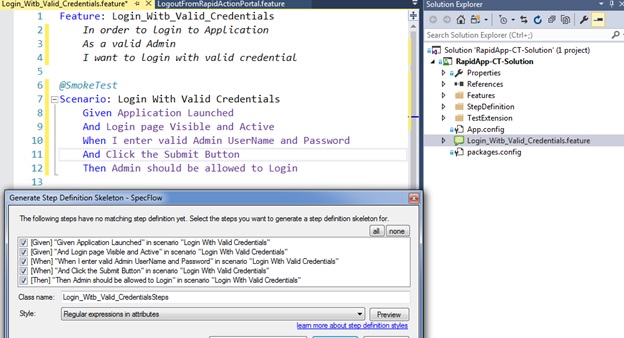 Refer to the below picture for the Generated Step Definition file.

Step 4: Build the Project and Make Sure That Newly Created Feature Files Are Listed in the Test Explorer.

Step 5: Run the Test and Make Sure That the Test Is Failing in the Initial Run.

Step 6: Implement the Feature One-by-One in the Project. Write the Appropriate Test and Run it Again.

Step 7: Make Sure That the Test Passed After Refactoring.

Once the tests are passed with the refactored code, the  next step is to push the feature to the next phase of testing, production.

ATDD enables the Agile development team to enable a Shift Left approach. It helps them to qualify feature development in the earlier stages of the SDLC and ensure quality from day one of the project.