Hey there! If you are reading this blog post, then I guess you are already aware of Prometheus and how it helps us in monitoring distributed systems like Kubernetes. And, if you are familiar with Prometheus, then chances are you have come across the receiver called Thanos. Thanos is a popular OSS that helps enterprises achieve an HA Prometheus setup with long-term storage capabilities. One of the common challenges of distributed monitoring is implementing multi-tenancy. The Thanos receiver is a Thanos component designed to address this common challenge. The receiver was part of Thanos for a long time, but it was experimental. Recently, Thanos went GA with the receiver component.

We tried this component with one of our clients and it worked well. However, due to a lack of documentation, the setup wasn't as smooth as we would have liked. The purpose of this blog post is to lay out a simple guide for those who are looking forward to creating a multi-tenant monitoring setup using Prometheus and the Thanos receiver. In this post, we will try to use the Thanos receiver to achieve a simple multi-tenant monitoring setup where Prometheus can be a nearly stateless component on the tenant side.

A Few Words on the Thanos Receiver

The receiver is a Thanos component that can accept remote write requests from any Prometheus instance and store the data in its local TSDB; optionally it can upload those TSDB blocks to object storage, like S3 or GCS, at regular intervals. The receiver does this by implementing the Prometheus Remote Write API. It builds on top of existing Prometheus TSDB and retains its usefulness while extending its functionality with long-term-storage, horizontal scalability, and down-sampling. It exposes the StoreAPI so that Thanos Queriers can query received metrics in real-time.

The Thanos receiver supports multi-tenancy. It accepts Prometheus remote write requests and writes these into a local instance of Prometheus TSDB. The value of the HTTP header ("THANOS-TENANT") of the incoming request determines the id of the tenant Prometheus. To prevent data leaking at the database level, each tenant has an individual TSDB instance, meaning a single Thanos receiver may manage multiple TSDB instances. Once the data is successfully committed to the tenant's TSDB, the requests return successfully. The Thanos Receiver also supports multi-tenancy by exposing labels that are similar to Prometheus external labels. 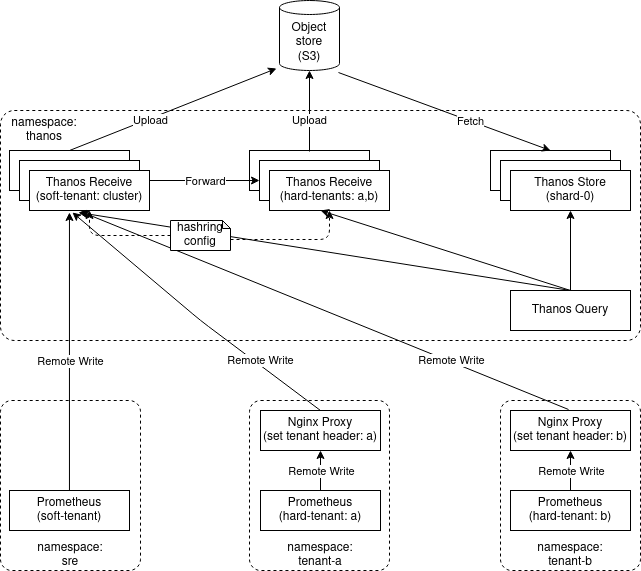 A simple multi-tenancy model with the Thanos Receiver

A brief overview of the above architecture:

The above architecture obviously misses a few features that one would also expect from a multi-tenant architecture, e.g: tenant isolation, authentication, etc. This blog post only focuses on how we can use the Thanos Receiver to store time-series from multiple Prometheus(es) to achieve multi-tenancy. Also, the idea behind this setup is to show how we can make Prometheus on the tenant side nearly stateless yet maintain data resiliency.

We will improve upon this architecture in the upcoming posts. So, stay tuned.

Deploy a Thanos-receiver-controller to auto-update the hashring configmap when the Thanos receiver statefulset scales:

The deployment above will generate a new configmap, thanos-receive-generated, and keep it updated with a list of endpoints when a statefulset with the label controller.receive.thanos.io/hashring=hashring-0 and/or controller.receive.thanos.io/hashring=default gets created or updated. The Thanos receiver pods will load the thanos-receive-generated configmaps in them.

NOTE: The default and hashring-0 hashrings are responsible for the soft tenancy and hard tenancy, respectively.

Create Thanos-receiver statefulsets and a headless services for soft and hard tenants. Note: We are not using persistent volumes just for this demo.

The receiver pods are configured to store 15d of data and with a replication factor of 2.

Create a service in front of the Thanos receiver statefulset for the soft tenants:

The pods of the Thanos-receive-default statefulset will load-balance the incoming requests to other receiver pods based on the hashring config maintained by the Thanos receiver controller.

We have configured it such that the Thanos querier fans out queries to the store only for data older than 2 weeks. Data younger than 15 days is to be provided by the receiver pods. P.S: There is an overlap of 1 day between the two time windows that is intentional for data resiliency.

Create a Thanos querier deployment and expose it through service and ingress:

We configure the Thanos query to connect to the receiver(s) and store(s) for fanning out queries.

We install the Prometheus-operator and a default Prometheus to monitor the cluster.

Deploy an NGINX proxy to forward the requests from Prometheus to the Thanos-receive service in  the Thanos namespace. It also sets the tenant header of the outgoing request:

Deploy an NGINX proxy to forward the requests from Prometheus to the thanos-receive service in the Thanos namespace. It also sets the tenant header of the outgoing request:

Add the following lines to /etc/hosts:

The above will allow you to locally access the minio, thanos querier, and cluster monitoring prometheus, as well as tenant-a's prometheus and tenant-b's prometheus. We are also exposing Alertmanager and Grafana, but we don't require those in this demo.

Access the Thanos querier from http://query.local/graph and, from the UI, execute the query count (up) by (tenant_id). We should see the following output:

Otherwise, if you have ` jq` installed, you can run the following command:

Either of the above outputs shows that the cluster, a, and b Prometheus tenants, respectively, have 17, 1, and 1 scrape targets up and running. All this data is getting stored in the thanos-receiver in real-time by Prometheus' remote write queue. This model creates an opportunity for the tenant side Prometheus to be nearly stateless yet to maintain data resiliency.

In our next post, we will improve upon this architecture to enforce tenant isolation on the thanos-querier.

If you encounter any issues while going through this article you can comment here.

Published at DZone with permission of Sayan Das. See the original article here.