Recently at Prairie Dev Con I gave a talk on #NoEstimates and part of the discussion centered on the practice of using estimates as motivation. Using estimates as motivation *may* be effective in the short term, but in the long term I believe it is dangerous and more likely to negatively affect motivation. As an alternative, in the talk I briefly reviewed Dan Pink's work on motivation that centers on Autonomy, Mastery, and Purpose. Have a quick look at that video if you haven’t already. Today I watched a Ted talk called 'What Makes Us Feel Good About Our Work?' by Dan Ariely that provides another angle on motivating through acknowledgment.

In the middle of the talk, he describes an experiment they ran to try and understand the role of acknowledgment in making us feel good about our work. The task in the experiment was fairly straightforward. Participants were given a piece of paper filled with random letters and were asked to find the pairs of letters on that page. For example, in "aswwhggjks", you would find the pairs "ww" and "gg". Participants were paid a certain amount to complete the first page, and then for every subsequent page they would complete, they were paid slightly less. 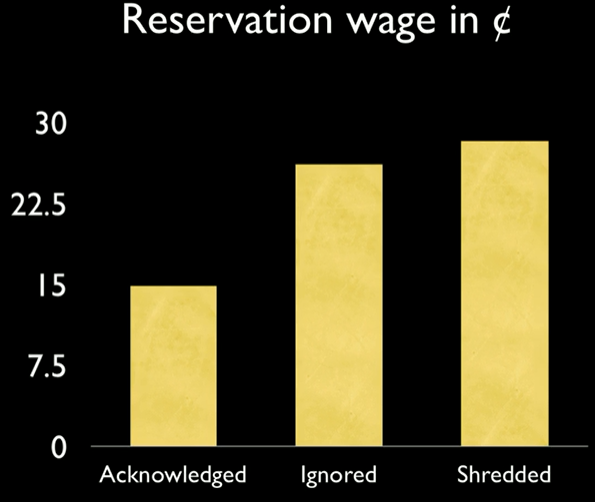 The results of the experiment are displayed in the image - people were willing to work for much less in the first version of the experiment than in the second and third versions. In addition, people stopped working at about the same level if their work was being ignored or shredded. As Dan summarized, "ignoring their performance is almost as bad as shredding it." There is good news and bad news here. The bad news is that if you aren't acknowledging the efforts of your team or employees on a regular basis, it is likely having a negative effect on their motivation. The good news is that there are some simple experiments you can try:

Thanks for reading - I appreciate it.