This is a question and a myth I have to fight against all the time. It's so hard to convince people that all execution plans are estimated plans in the first place (by the way, all execution plans are estimated plans). If we execute a query at the same time we capture a plan, we have enabled SQL Server to also capture run-time metrics with that plan. So we end up with what is known as an actual plan, but it's still just an estimated plan plus those run-time metrics.

When you look at a given operator within an estimated plan, it's going to show you four numbers related to cost:

The values in the CPU and I/O cost represent calculations, usually based on the row counts supplied by statistics, but they can come from other sources as well. It's all very internal to the query optimizer, although, with some experimentation and testing, you can derive some of the calculations that arrive at the costs. Those costs are also not reflective of your machine. Yeah, it says CPU and I/O, but it's not measuring your computer to determine it's bandwidth and then reporting back to you. These are just estimated values. I recommend that you don't really think of it as CPU or I/O.

Focus instead on the overall Estimated Operator Cost (which, usually, consists of adding the other two costs). When you think about that cost, just think about it as Cost Units, not a literal interpretation of CPU and I/O. It'll help you keep your sanity.

The final value, the Estimated Subtree Cost, is the cumulative (added up in NodeID order) costs of each individual operator.

Everyone can agree. On an estimated plan, you work with estimated values.

Each plan also captures the Actual I/O Statistics. These represent the number of reads, broken down by type.

Therefore, with all this information, clearly, I'm wrong and the costs shown on the plan are the actual execution plan costs, not a repeat of the estimated plan costs.

Let's do an experiment and take a query: 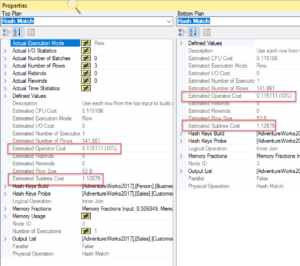 You see that these are the same value. Despite the fact that the estimated number of rows is 141 and the actual number is 3. While the information may be available for an actual execution plan cost to be generated, it is not.

Why doesn't Microsoft show us different costs for different plans? The information exists. We see it in the plans. The next step should be simple. However, as you can see, they are not taking that step. Not yet anyway.