For your legacy applications, if migration is on your mind, then you have managed to reach the right place to know more. Usually, migrations are contemplated because the applications are not in sync with the dynamic needs of the business. It is a strategic decision that takes time, but companies steadily realize that they need to do it, today or tomorrow.

Likewise many applications now are moving from AngularJS to Angular because they want to attach the element of lastingness to their apps. If you already have an app built with Angular JS then your app is either not frequently used or you are planning to terminate it.

You may also like: AngularJS, Basic to Expert: Day One

Different versions of Angular evidently have replaced AngularJs and are considered most suitable for front-end development. For dynamic single-page applications, Angular’s latest version Angular 8 is considered serious competition. Angular developers are aware that the cross over has to happen but aren’t sure about which upgrade path they should choose for the critical progression.

A StackOverflow survey that was conducted in 2018 proclaimed that about 36.9% of developers are currently employing divergent versions of Angular for web and mobile application development. So the current AngularJS applications in use will continue to do so making use of NPM, Bower and much more. AngularJS was initiated by Google in 2009 and since then it has amassed an active community of developers. From its inception to date, it has already released many versions including the latest Angular 9 beta version.

Let us confirm our claims with a small statistical illustration. 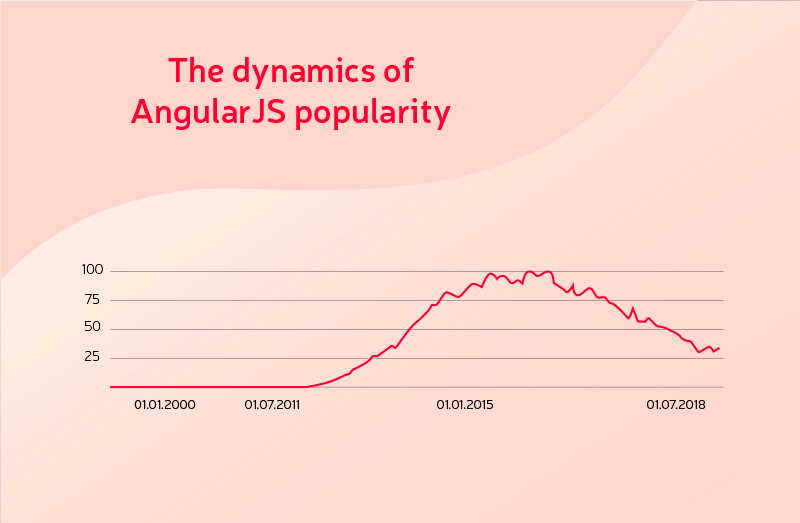 A great part of the success of AngularJS can be attributed to its churning out of the Google factory. Google is a tech giant hence has the resources to create a holistic framework. It also has managed to popularize it amongst the developers. But after it, many frameworks were released and the shortcomings of Angular app development with AngularJS came glaring back.

In order to counter competition, Google released the newer versions of Angular more so with the use of TypeScript as a language and not JavaScript.

AngularJs Vs Angular: Key Differences and Reasons to Migrate

Advantages of Updating Your Framework From AngularJS to Angular

AngularJS is built on the MVC model in which business logic is included in the model and the output is achieved in the controller. Model pipelines are automatically created by AngularJS. Components here are directives with pre-set templates. Also, their architecture is highly modernized making application creation and support extremely easy.

For Angular app development, Angular developers working on AngularJS have to remember the correct NG directive in order to bind any property but in the case of Angular event, binding can be done with (). This is why Angular is considered more intuitive compared to AngularJS.

AngularJS has a popular data-binding feature that made it one of the most popular frameworks. But it was also the reason for its decline. On the other hand, Angular is faster in performance compared to Angular Js.

Both of them have this feature but in AngularJS, it is infused in a different link. In the case of Angular applies a stratified dependency interjection system with the use of declaring, on the other applied constructive functions.

Advantages of updating your framework from AngularJs to Angular

Major Performance booster —  There is no doubt that performance is bound to magnify as Angular is considered 5 times faster to AngularJS. Run-time performance is better and the latest versions of Angular have successfully managed to reduce bundle size. AOT  changes are minor which has led to prior compiling of applications by the compiler. Compilation time has reduced and code download and execution have become faster.

Better Migration — Both the frameworks can survive in a single application which makes the angular app developers migrate in a slow and steady manner. Despite the migration process, the third-party libraries in AngularJS also will be available for Angular.

Angular comes with a progressive web application, modernize legacy applications, and an enhanced user experience thereby making it one of the most preferred frameworks from the house of Google. For easy and worry-free migration.

Best of DZone: Angular Tutorials for Beginners and Experts Alike

Angular: Everything You Need to Know [Tutorials]