To call Google a titan of the tech industry would be an understatement. Their name has become synonymous with the internet itself. The very act of retrieving information from the internet - the core functionality of the internet and its most basic purpose - is known simply as “Googling” something. On their road to becoming the web’s biggest search engine and a moniker for the internet itself, Google also pioneered much of what it takes to grow a company at scale.

On the Dev Interrupted Podcast Google Senior Engineer’s Hyrum Wright and Titus Winters, shared their lessons learned from programming at Google with LinearB Co-Founder and COO, Dan Lines. Both engineers have a deep understanding of the principles behind software development: Hyrum is semi-famous as the "Hyrum" of Hyrum's Law; while Titus is responsible for 250 million lines of code that over 12,000 developers work on.

But what lessons can we take from their interview - and their book Software Engineering at Google: Lessons Learned from Programming Over Time? How can we apply those lessons to our own projects? I’ve pulled out the core takeaways from their interview and condensed them so that any developer or company, be they responsible for 2,000 lines of code or 2,000,000, can learn something from Google’s roadmap.

Why listen to Google

In spite of their enormous success and scale, Google doesn’t pretend to have all the answers; this lack of presumption is exactly the thinking that has made them the titan they are. Previous success is no guarantee of future success and no one understands this better than Google.

One thing that Google is very good at is not accepting how everyone else does it as the one true way.” - Titus Winters, on the Dev Interrupted podcast at 20:35

It’s easy to assume that events and conclusions are foregone, or that one event naturally follows another. Yet this is rarely the case. Most of the time people are working towards a specific outcome, and it’s not until later that the outcome is apparent contextually. This is true in life and software development.

Google has spent the past couple decades approaching everything they do as trial and error, learning what does and does not work, and trying to institutionalize the things that do work. This is not a straight path.

This mindset is obvious in Hyrum and Titus’ interview. Titus uses the analogy of Lewis and Clark to explain how the software development process at Google has unfolded.

“They say Lewis and Clark explored the Louisiana Purchase, by which we mean, they took one path out and one path back, which is not exactly mapping, but in a similar way, we're trying to give an exploration/trip-report/map.” - Titus Winters, on the Dev Interrupted podcast at 6:17

He’s admitting that Google doesn’t have all of the answers; that Google’s path isn’t the only path to success; that other paths may be superior to Google’s; and that their path may not work for every business. But, with decades of experience, Google has learned a thing or two along the way, and maybe, just maybe, we can all learn something from the path they have trailblazed.

After all, there aren’t many companies in the world that have hundreds of millions of lines of code.

The 3 Pillars of Software Engineering at Google 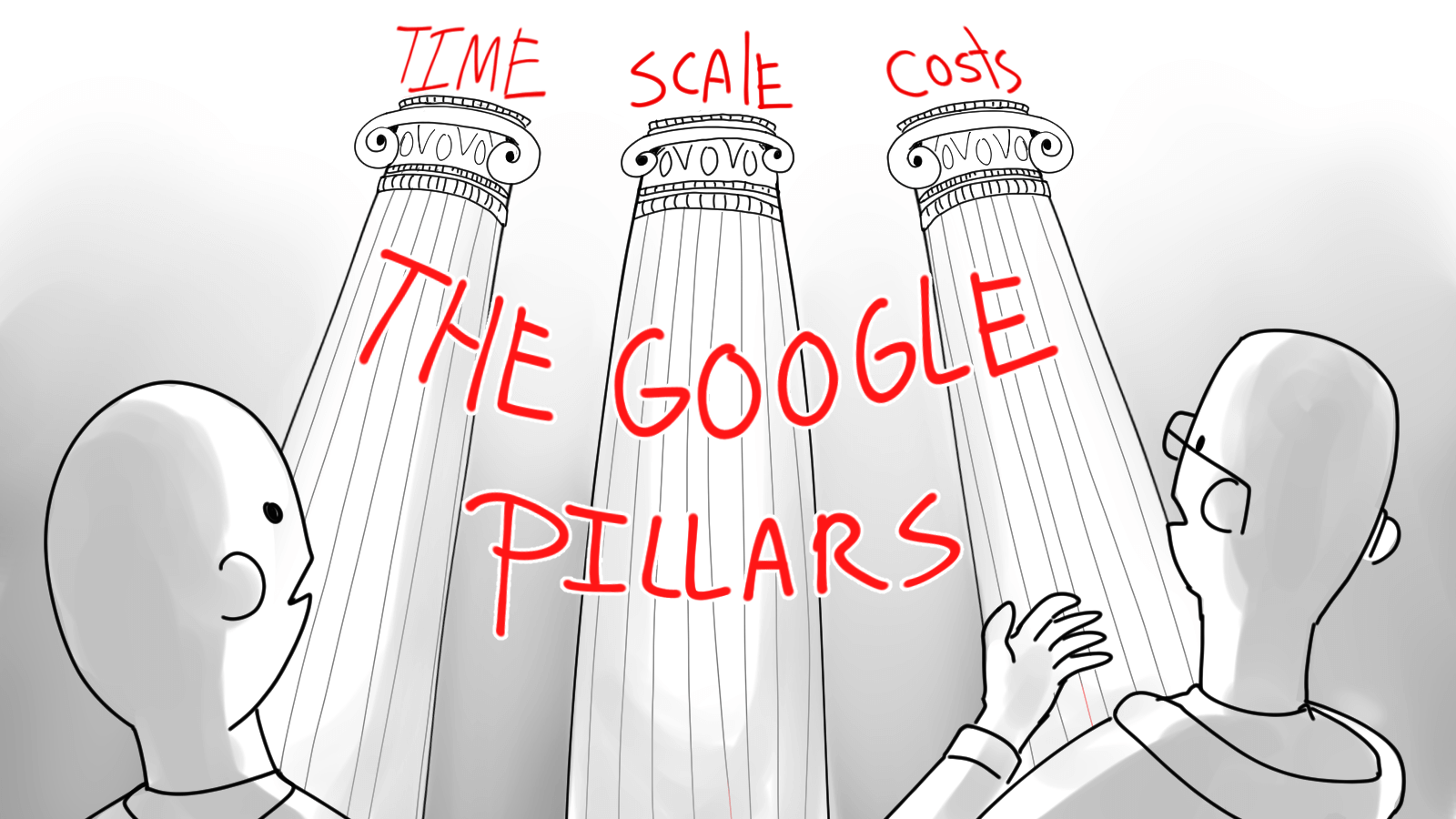 With so much code to manage, Google has made maintaining their code a strategic goal. Code must be fresh and able to sustain changes to the code base for business or technical reasons. To best allow for this, they have identified 3 concepts that they believe are core to software engineering.

All of the hardest stuff that software engineers are going to have to deal with like skew version, backwards compatibility, issues with data storage, dependency management, upgrades and many more, are all problems created by time. Once dev teams realize this, it will change their perspective on how best to write code.

If dev teams want their code base to last, they need to think about constructing code so that it can sustain changes within an organization’s lifespan. This fundamental realization allows time to peacefully coexist with the second pillar.

How your system scales is a relationship with time. Scaling isn’t a new problem and Google has been at the forefront of pushing scale their entire existence. For instance, email existed before Gmail and search engines existed before Google, but Google’s brilliance was their ability to scale these technologies better than their competitors. It’s the root of their success.

To beat their competitors they adopted a mindset of scaling as a process - a continual evolution.

As a company grows, all of its operations expand and that continued expansion requires more resources, which begets even more resources still. This means growth cannot occur superlinearly because if it does, eventually a company will consume all of its resources maintaining the status quo.

The key takeaway is to make sure your codebase and software both scale sublinearly, that way if your codebase doubles or triples you won’t need six times as many engineers just to maintain your systems. (Sublinear scaling refers to team growth that occurs more slowly than the number of supported services of a company. Superlinear growth is the opposite - with team growth outpacing the number of supported services.

After taking into consideration the best practices around time and scale, what is left is good decision making. Just as Hyrum and Titus note in their book, “in software engineering, as in life, good choices lead to good outcomes.”

However, no organization has perfect data on which to base every decision, and therefore must strive to make the best decisions they can with the most data possible. People need insights into what an organization finds impactful.

For instance, if an engineer spends a week on a project, it should probably be a project the organization considers a priority. Because if it is not, then no matter how perfect the code, it probably wasn’t the best use of the engineer’s time. Brain power should be devoted to the most difficult problems, not where a semicolon should be placed. The cost of incorrectly evaluating trade-offs is failing the 1st two pillars.

While Hyrum and Titus may not be Lewis and Clark reborn, they have a valuable story to tell about trial and error in the Information Age.

How a company scales is likely to define how it differentiates itself from its competitors and whether or not it will be successful. A company that can scale sublinearly will thrive, all others will stagnate as victims of their own success.

Minding the principles of these modern-day explorations into the wilderness of code will help any organization keep an eye on the most valuable resource: time. But remember just as Lewis and Clark found one path forward, they didn’t find the only path forward.

We can all learn something from Google, but never forget the path forward is your own.

A copy of the new book by Hyrum and Titus, Software Engineering at Google: Lessons Learned from Programming Over Time, is available for free online.

If you haven't already joined the best developer discord out there, WYD?

Look, I know we talk about it a lot but we love our developer discord community. With over 1500 members, the Dev Interrupted Discord Community is the best place for Engineering Leaders to engage in daily conversation. No salespeople allowed. Join the community >>