The popular conception of AI is that it will either take your job or will be your new electronic assistant. The assumption is that AI is all about you and me.

We have a different perspective on where AI’s impact will most be felt. We think that it’s inevitable that ultimately, AI will mostly interact with other AI.

Take the municipal 911 system as an example. The man or woman on the street has no problem imagining 911 calls being answered by an NLP-trained chatbot. If they like the idea, it’s because they anticipate a system that is more objective, more consistent, and more efficient. If they don’t like the idea, it’s because they don’t believe software can be trusted, particularly in life or death situations.

But putting an algorithm in charge of deciphering human speech emanating from highly stressful and unpredictable human situations is a huge stretch for ML. We’re a long way from being able to put bots in front of — let alone in place of — human 911 operators.

On the other hand, there’s a way to incorporate AI into 911 that we find far more likely and ultimately significantly more valuable:

You call 911 with an emergency. An AI listens in on the conversation between you and the operator. Through hours of listening to a small number of operators, the AI is adept at understanding the nature and urgency of the call. It picks up on nomenclature that it has learned relates to other elements of the overall emergency management ecosystem. It connects with AI’s in other parts of the ecosystem to alerts them to the emergency to negotiate their response.

The ambulance dispatch AI is tasked with identifying the closest team with the most appropriate skills. The traffic control AI begins to coordinate stop light cycles to speed the ambulance’s journey. The ER AI ensures that the right personnel, medicines, and equipment are at the ready. The AI on board the ambulance coaches the EMS personnel on diagnostic possibilities and treatment options.

Impossible, you argue. There’s no way that this kind of interdepartmental coordination and integration comes to pass. There are too many political and institutional barriers.

How, you ask? Because ML-based systems will inevitably evolve to be exquisite self-correcting and self-training entities. Data science teams are already endowing algorithms with early versions of what ultimately will be their first directive, to be evermore confident about evermore edge cases. And this first directive will drive algorithms to identify gaps in their confidence and of their own initiative fill those gaps. 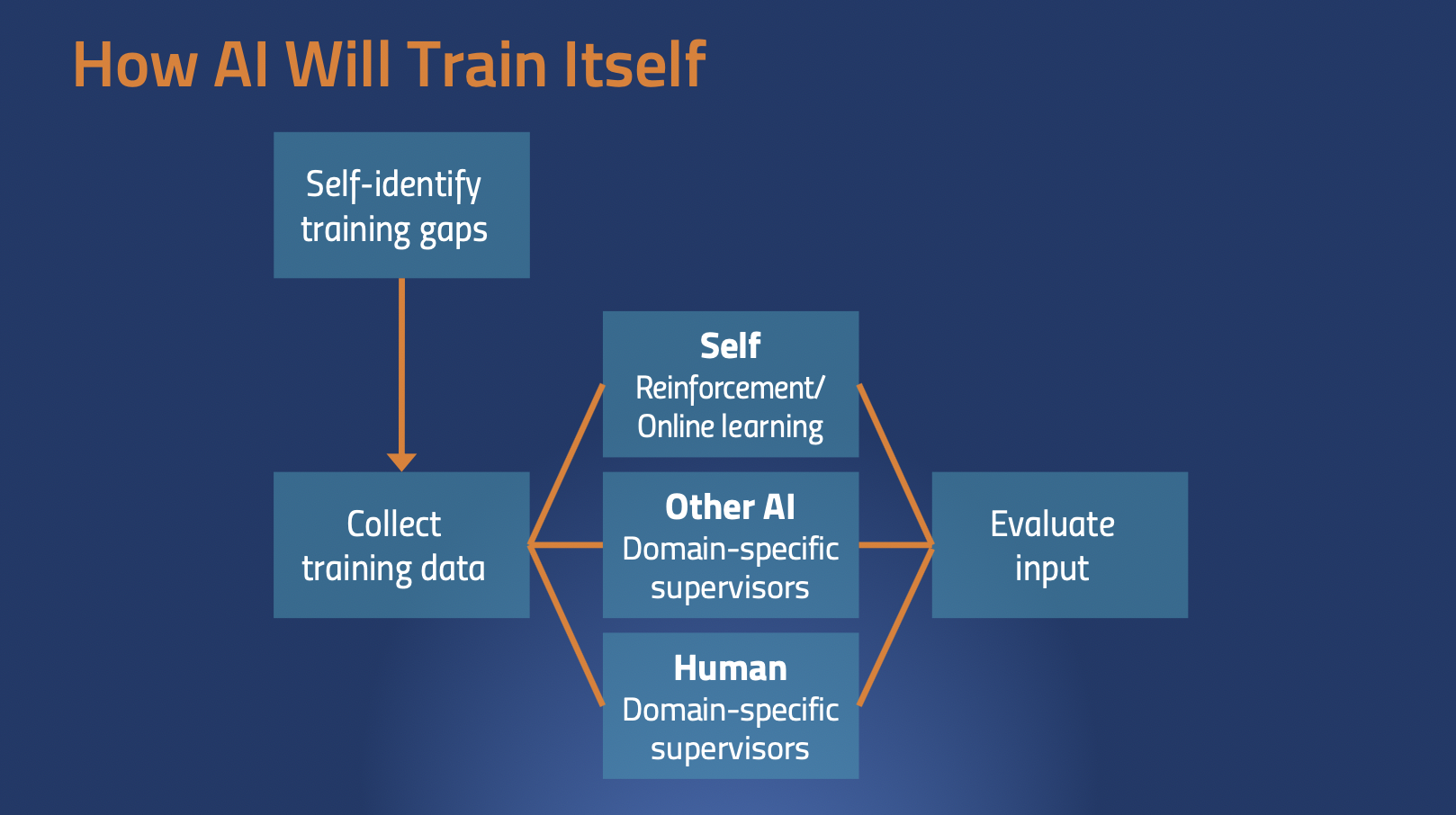 When humans meet other humans, an instinctive API manages the interaction.

Humans determine each other’s identity: Who are you?

They establish levels of trust: How can I know whether what you say is true?

And they assess each other’s value: How do I prioritize what you can offer to me?

AI will require a similar API. Like humans, an AI that is on a search for self-improvement will need to interrogate other supervisors and negotiate with them.

Identity: Who is this supervisor? What is their experience?

Trust: Why should I trust them? What is my confidence in their input?

Value: How badly do I need this data? What is the max impact available given my budget?

And where will this new kind of API — this mechanism by which software is able to interrogate and negotiate — come from?

The seeds are already being planted as part of the evolution of ML as a discipline. Alegion’s own Training Data Platform uses early versions of this API to incentivize active learning, and we surely are not alone.

But the algorithms themselves will evolve this new kind of API so that it meets their insatiable demand for self-improvement and for greater confidence.

And it’s AI that can interrogate and negotiate that will deliver the 911 system of the future.