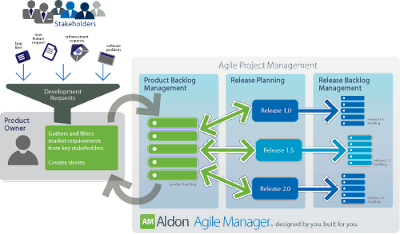 I am delighted to announce that the new sponsor of my blog is Aldon, who have just announced the release of a new project management application called Aldon Agile Manager.

I've had a good look through their web site and I've also had the benefit of a pre-launch preview, so I thought I'd tell you a bit more about it...

First of all, it's free, which is always nice!

The initial release is aimed at Product Owners and provides the facilities to easily manage your Product Backlog. It's a nice, web-based interface and allows you to keep control of all your User Stories in one place.

It looks very simple to use and allows you to edit your backlog with ease. There a couple of really neat features to help make editing fast. You can edit details of your user stories directly in the list. You can also edit multiple items all at the same time, making mass changes much easier than they would be in Excel.

Naturally, you can sort your backlog so you can see all your user stories in an order that makes sense to you. You can also define your own values for all the key fields like priority, story status, story type, release status and release type. 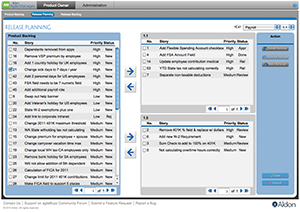 Another neat feature is the ability to allocate user stories quickly into releases.

It has a really simple visual interface to move stories from your backlog into a release and potentially back again. It also allows you to show multiple releases on the same page, and sort stories into one release or another.

That's a feature that should make Release Planning nice and straightforward and make your Release Backlogs easy to manage.

Later on, Aldon say they will integrate Aldon Agile Manager into their other commercially-available Application Lifecycle Management (ALM) solutions, which cover a full range of IT areas from IT service management, IT compliance, software change management, deployment and release management, and IT portfolio management.

However, they were keen to point out that Aldon Agile Manager will always remain available for free as a standalone product, with no obligation to use their other commercial products unless you want to.

Aldon are already using Aldon Agile Manager internally to manage their own agile development projects. I must admit, I like that. I like it when a company "eats their own dog food" - there's no doubt in my mind it results in better products that actually work in practice, rather than just in theory.

I was also fortunate enough to see some of Aldon's prototypes for some of their future developments. They intend to release new versions of the product every 3-4 months and they've got some great ideas. I particularly liked the way they intend to allow you to visually sort user stories into columns based on their Fibonacci size. They also showed me a great prototype for how they plan to allow you to sort user stories into priority order, again in a very visual way. 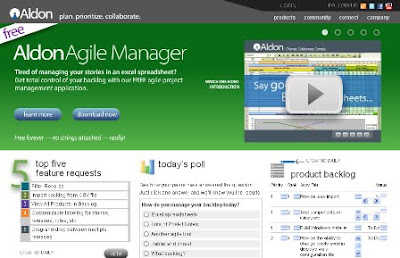 What I like most of all about their approach to future development, apart from the fact they are using an agile approach on this product and releasing it as it develops, is the fact that they're asking the user community to suggest changes and to vote on which features they would most like to see.

They've gone way beyond simply asking for feedback, and have published their product backlog, allowing the community to really contribute to the product and to steer its development. Especially for a free product, I think that's a really great approach.