The very first task we have to do to run our Alexa Skill in a Kubernetes environment is to transform our Alexa Skill backend into a NodeJS app running in an Express Web server.

You can build a custom skill for Alexa by implementing a web service that accepts requests from and sends responses to the Alexa service in the cloud. The web service must meet certain requirements to handle requests sent by Alexa and adhere to the Alexa Skills Kit interface standards.

The original author, TJ Holowaychuk, described it as a Sinatra-inspired server, meaning that it is relatively minimal with many features available as plugins. Express is the backend component of the MEAN stack, together with the MongoDB database software and AngularJS front-end framework.

The first step we need to do is install the express dependency. This will enable us to configure and run the Express Web Server.

Once we have installed the Express Web Server, we need to install the official ask-sdk-express-adapter. This package will help us to run the Alexa Skill instance from the Alexa.SkillBuilders object in an Express Web Server, creating a request handler to execute all the incoming requests.

Once we have all the packages installed, we now have to configure it. It is a fact that the Amazon Alexa team has made a huge effort on the express adapter. This is because the transform of an Alexa Skill backends that are an AWS Lambda into an Express Web Server app takes only 4 lines of code.

This is a typical AWS Lambda backend of an Alexa Skill:

And, this is the Express Web server backend of an Alexa Skill:

Now, we have the Express adapter created. With the method post of the app object, we create a POST listener. This method has two parameters including:

Everything is set. Now, we just have to call the method listen with the port that the Express server will use to run our Web server.

You can find all the code on the app folder.

Running and Debugging the Skill With Visual Studio Code

The launch.json file in .vscode folder has the configuration for Visual Studio Code, which allows us to run our Express Server locally like so:

After configuring our launch.json file, it is time to click on the play button and make our request to our Express server. 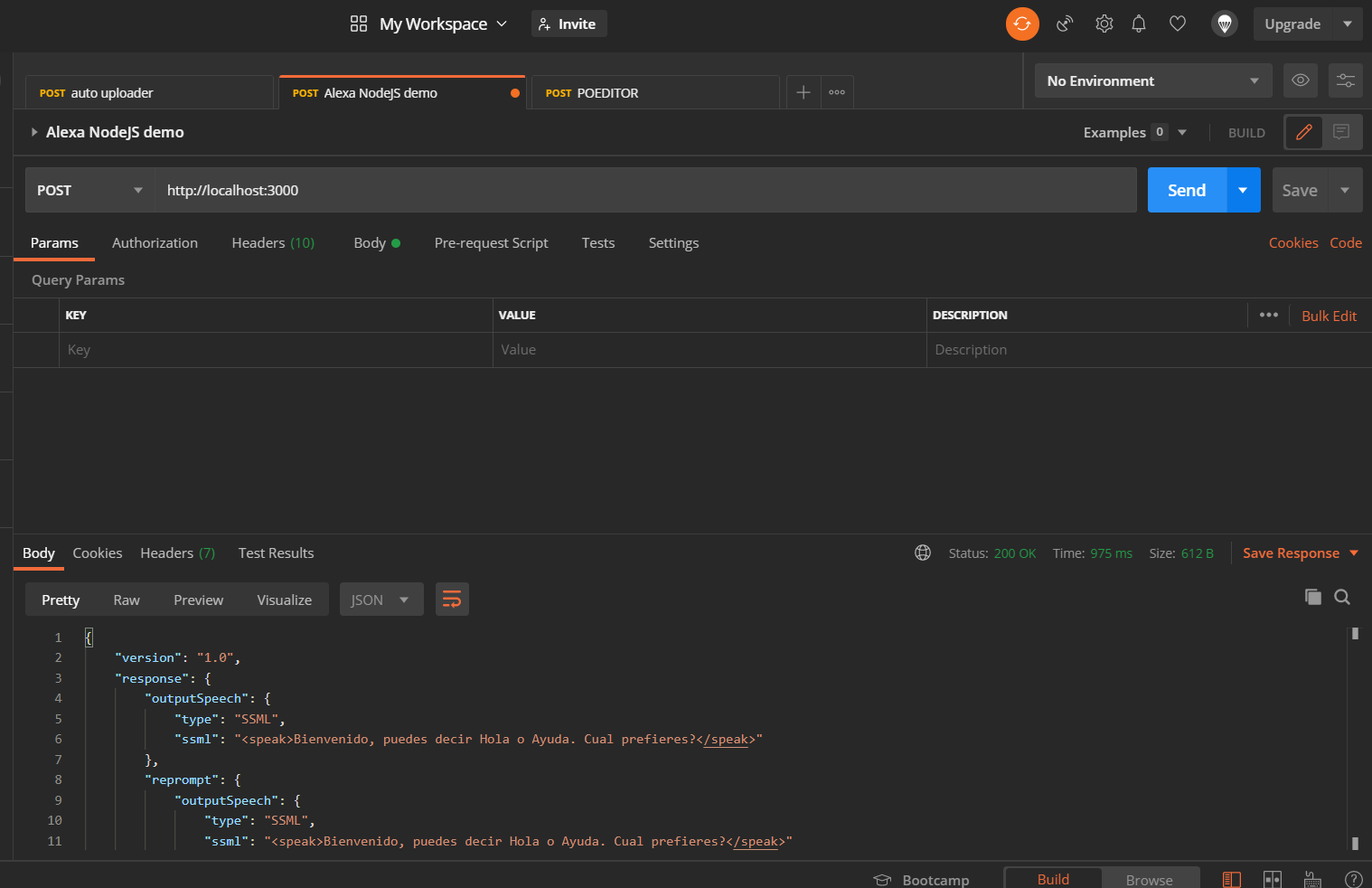 After executing this, you can send Alexa POST requests to http://localhost:3000.

I’m sure you already know the famous tool called Postman. REST APIs have become the new standard in providing a public and secure interface for your service. Though REST has become ubiquitous, it’s not always easy to test. Postman makes it easier to test and manage HTTP REST APIs. Postman gives us multiple features to import, test, and share APIs, which will help you and your team be more productive in the long run.

After running your application, you will have an endpoint available at http://localhost:3000. With Postman, you can emulate any Alexa Request.

As you can see, with just 4 lines of code, we can transform an Alexa Skill by using AWS Lambda into an Express app, all thanks to the Amazon Alexa team and its fabulous adapter.