Amazon is introducing a new speaking style option for its voice assistant Alexa, the Verge reported today. This style places emphasis on phrases and words in a manner similar to the easily recognizable "newscaster voice" used by journalists on broadcast television and radio to report the news.

Trevor Wood and Tom Merritt of the Alexa Speech group shared yesterday that it only took a few hours' worth of training materials to teach Alexa how to speak like a newscaster using Amazon's new approach to NTTS. Listen below to the NTTS newscaster voice and compare it with the other, earlier versions.

How does it work? "Our neural TTS system comprises two components: (1) a neural network that converts a sequence of phonemes — the most basic units of language — into a sequence of 'spectrograms,' or snapshots of the energy levels in different frequency bands; and (2) a vocoder, which converts the spectrograms into a continuous audio signal," Wood and Merritt explain.

Twitter reacted to the news with a grab bag of mixed feelings and wit. A radio announcer joked that it might be "time to call it" for his profession:

Others made Anchorman references: 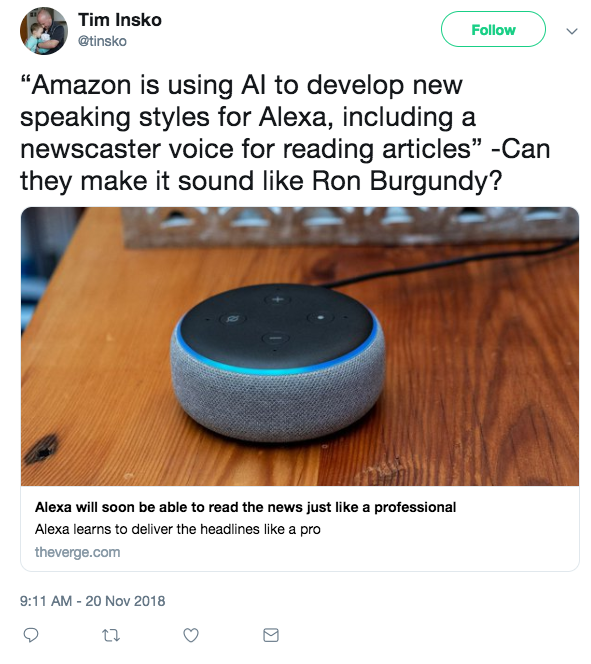 This new development comes two months after Amazon first announced a new "whisper mode" for Alexa, allowing Alexa devices to respond to whispered commands by whispering. No word on a Ron Burgundy voice yet, though.