bayesian inference is a statistical method used to update a prior belief based on new evidence, an extremely useful technique with innumerable applications. uncertainty about probabilities that are hard to quantify is one of the challenges of bayesian inference, but there is a solution that is exciting for its cross-disciplinary origins and the elegant chain of ideas of which it is composed.

to make it concrete, imagine a kid who gets dessert after dinner 4 out of 7 days per week. that's p (θ), the prior belief. of the nights she gets dessert, she ate her entire dinner 2 of 4 nights. that's p ( data |θ), the new evidence. but she eats her entire dinner 3 of 7 nights per week. that's p ( data ), the new evidence with the prior belief marginalized. so, if we execute the formula, the posterior belief is (4/7 * 2/4) / 3/7, and if the little girl finishes her dinner she has a 2/3 likelhood of getting dessert. (the injustice!)

one thing that makes bayesian inference hard is that more often than not the integral in the denominator, also known as the normalizing constant , doesn't have a closed analytic form. it has to be numerically approximated, and it’s hard to do so. you’re estimating the probability of observing something in theory, without any evidence.

this is where the exploit of some techniques developed in very different fields comes in: markov chains, monte carlo methods, and the metropolis-hastings algorithm.

how does that help? as we sample the posterior, we can easily do either of the following:

the monte carlo methods were developed in the 1940s in los alamos during world war ii by a team of physicists working on the manhattan project . the metropolis-hastings algorithm was subsequently developed in the 1950s at los alamos by nicolas metropolis working on many-body problems in statistical mechanics and later generalized by w. hastings in 1970s. with the emergence of computing power in the 1980s, there was a rapid surge in the decade to follow in the application of these algorithms to problems in fields ranging from computational biology to finance and business that had proven intractable with other mechanisms. decades-old ideas originally developed in one field have served to make contributions in different areas many years later - evolving bayesian inference via exaptation . 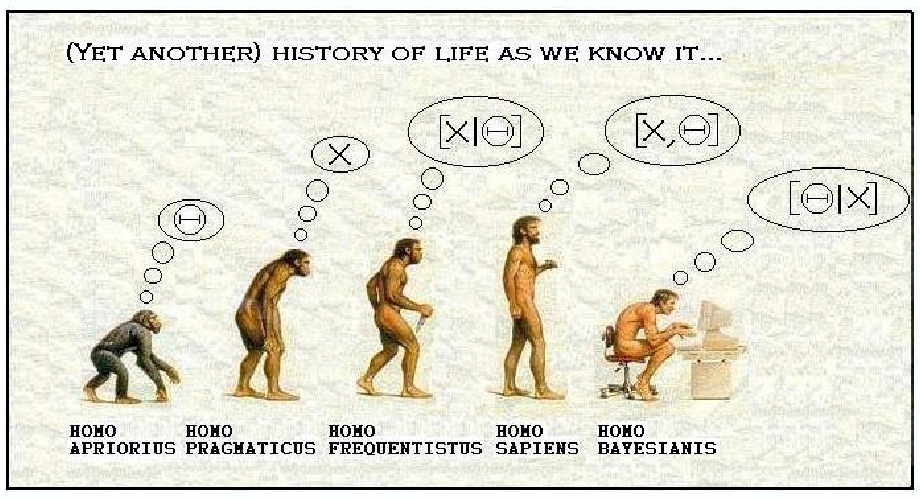