Existing Internet protocols, such as Transmission Control Protocol/Internet Protocol (TCP/IP), are often too inefficient and power hungry to apply to emerging IoT applications. So here, we will discuss some alternative Internet protocols developed for use by IoT systems.

Message Queuing Telemetry Transport (MQTT) and Constrained Application Protocol (CoAP) are two alternative Internet protocols. Both seek to improve IoT device operation while maintaining interoperation with the Internet. The main difference between MQTT and CoAP is in their implementation. (We’ll go more in-depth on MQTT and CoAP later.)

Before going further, it is helpful to review existing Internet layers and protocols. The Internet is based on TCP/IP communications and operates using the seven-layer OSI model shown in the following chart.

Each layer performs a specific function. Together, the seven layers enable communication across different connectivity solutions, enabling a wide variety of applications. 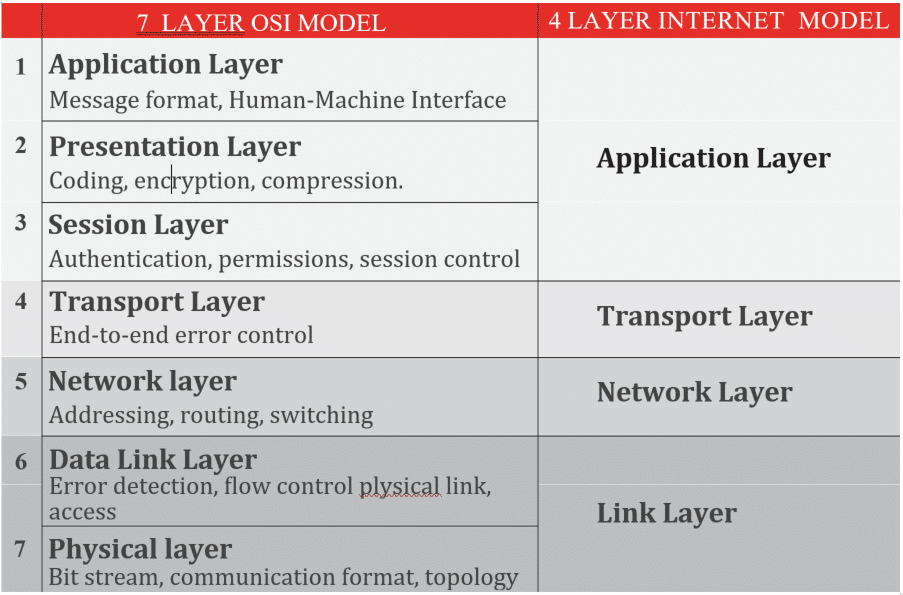 In the application layer, the user inputs data and data is output to the user. This layer provides services for applications, such as email.

This layer converts incoming and outgoing data from one format to another for presentation.

This layer sets up and authenticates, coordinates, maintains, and terminates conversations. IoT sessions are very different from traditional Internet sessions. Because of this, a lot of effort has gone into, and will continue to go into, optimizing this layer for IoT applications. The session layer is where CoAP and MQTT usually operate.

This layer provides communication session management support. This entails the packetization of data, delivery of the packets, and error checking once the data arrives. On the Internet, Transmission Control Protocol (TCP) and Universal Datagram Protocol (UDP) provide these services for most applications. TCP is used for most applications with human interactions with the Web (such as email, Web browsing, gaming, etc.). It also supports acknowledgment, retransmission, and flow control. (Note: These capabilities increase overhead.) For some applications, TCP can be overkill, making UDP the preferred option. UDP is also better suited for real-time data applications such as voice and video. In these cases, it is unlikely you will need to retransmit a voice or video packet. Additional trade offs are discussed below.

This layer handles the addressing and routing of the data. This is where the Internet Protocol (IP) operates and is where an IP address originates. The traditional Internet operates on IPversion4 (IPv4), which uses 32-bit addresses. However, it is starting to evolve toward IPversion6 (IPv6), which uses 128-bit addresses to accommodate substantially more Internet addresses.

This layer conveys the bit stream through the network at the electrical, optical, or radio level.

Read more about the IoT Technical Stack in the “A Reference Guide to IoT” eBook.