This figure shows the architecture of the Query layer. It has four submodules:

Now, let’s look at the source code hierarchy under thenebula-graphrepository.

4. How a Query Is Executed

To introduce how the Query layer works, let’s take an nGQL statement likeGO FROM "Tim" OVER like WHERE like.likeness > 8.0 YIELD like._dstas an example. Its data flow through the Query layer is shown in the following figure.

When the statement is input, it is processed as follows.

In the first stage, the statement is parsed by the Parser (composed of Flex and Bison) and its corresponding AST is generated. The structure of the AST is shown in the following figure.

In this stage, the Parser intercepts the statements that do not conform to the syntax rules. For example, a statement likeGO "Tim" FROM OVER like YIELD like._dstwill be directly intercepted in this stage because of its invalid syntax.

In the second stage, the Validator performs a series of validations on the AST. It mainly works on these tasks:

For multiple statements, like $var = GO FROM "Tim" OVER like YIELD like._dst AS ID; GO FROM $var.ID OVER serve YIELD serve._dst, the Validator verifies $var.ID: first to see if var was defined, and then to check if the ID property is attached to the var variable. If $var.ID is replaced with $var1.ID or $var.IID , the validation fails.

The Validator infers what type the result of an expression is and verifies the type against the specified clause. For example, the WHERE clause requires the result to be a Boolean value, a NULL value, or empty.

Take a statement like GO FROM "Tim" OVER * YIELD like._dst, like.likeness, serve._dst as an example. When verifying the OVER clause, the Validator needs to query the Schema and replace * with all the edges defined in the Schema. For example, if only like and serve edges are defined, the statement is as follows.

For an nGQL statement with the PIPE operator, such asGO FROM "Tim" OVER like YIELD like._dst AS ID | GO FROM $-.ID OVER serve YIELD serve._dst, the Validator verifies $-.ID . In the example statement, the ID property in the second clause was already defined in the previous clause, so the second clause is verified legal. If $-.ID is changed to $-.a , where a was not defined, the second clause is illegal.

When the validation succeeds, an execution plan is generated in Stage 3. Its data structure is stored in the src/planner directory, with the following logical structure. 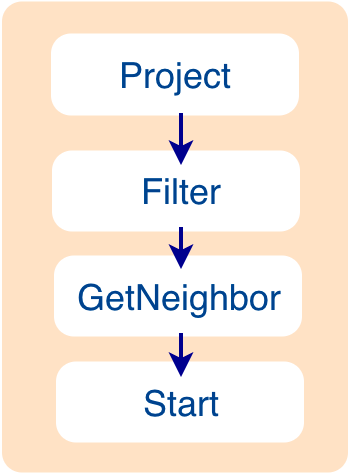 The input and output of each node are also determined in toPlan(). Although the execution is performed in the order defined in the execution plan, the input of each node can be customized and does not completely depend on the previous node, because the input and output of all nodes are actually stored in a hash table, where the keys are the names customized during the creation of each node. For example, if the hash table is named as ResultMap, when creating the Filter node, you can determine that the node takes data from ResultMap["GN1"], then puts the result into ResultMap["Filter2"], and so on. All these work as the input and output of each node. The hash table is defined in src/context/ExecutionContext.cpp under the nebula-graph repository. The execution plan is not really executed, so the value of each key in the associated hash table is empty (except for the starting node, where the input variables hold the starting data), and they will be computed and filled in the Executor stage.

This is a simple example. A more complex one will be shown at the end for you to better understand how an execution plan works.

An execution plan generated in the preceding stage can be optimized optionally. In the etc/nebula-graphd.conf file, when enable_optimizer is set to true, the execution plans will be optimized. In this example, when optimization is enabled, the data flow is as follows.

As shown in the preceding figure, the Filter node is integrated into the GetNeighbor node. Therefore, when the GetNeighbor operator calls interfaces of the Storage layer to get the neighboring edges of a vertex during the execution stage, the Storage layer will directly filter out the unqualified edges internally. Such optimization greatly reduces the amount of data transfer,which is commonly known as filter push down.

All the optimization rules we have implemented so far are considered as RBO (Rule-Based Optimization), which means the plans optimized based on the rules must be better than their original versions. The CBO (Cost-Based Optimization) feature is under development. The optimization process is a “bottom-up” exploration process: For each rule, the root node of the execution plan (in this case, the Project node) is the entry point, along the node dependencies, the bottom node is found, and then from the bottom node, the OptGroupNode in each OptGroup is explored to see if it matches the rule, until the entire execution plan can no longer apply the rule. Then, the next rule is explored.

This figure shows the optimization process of this example. 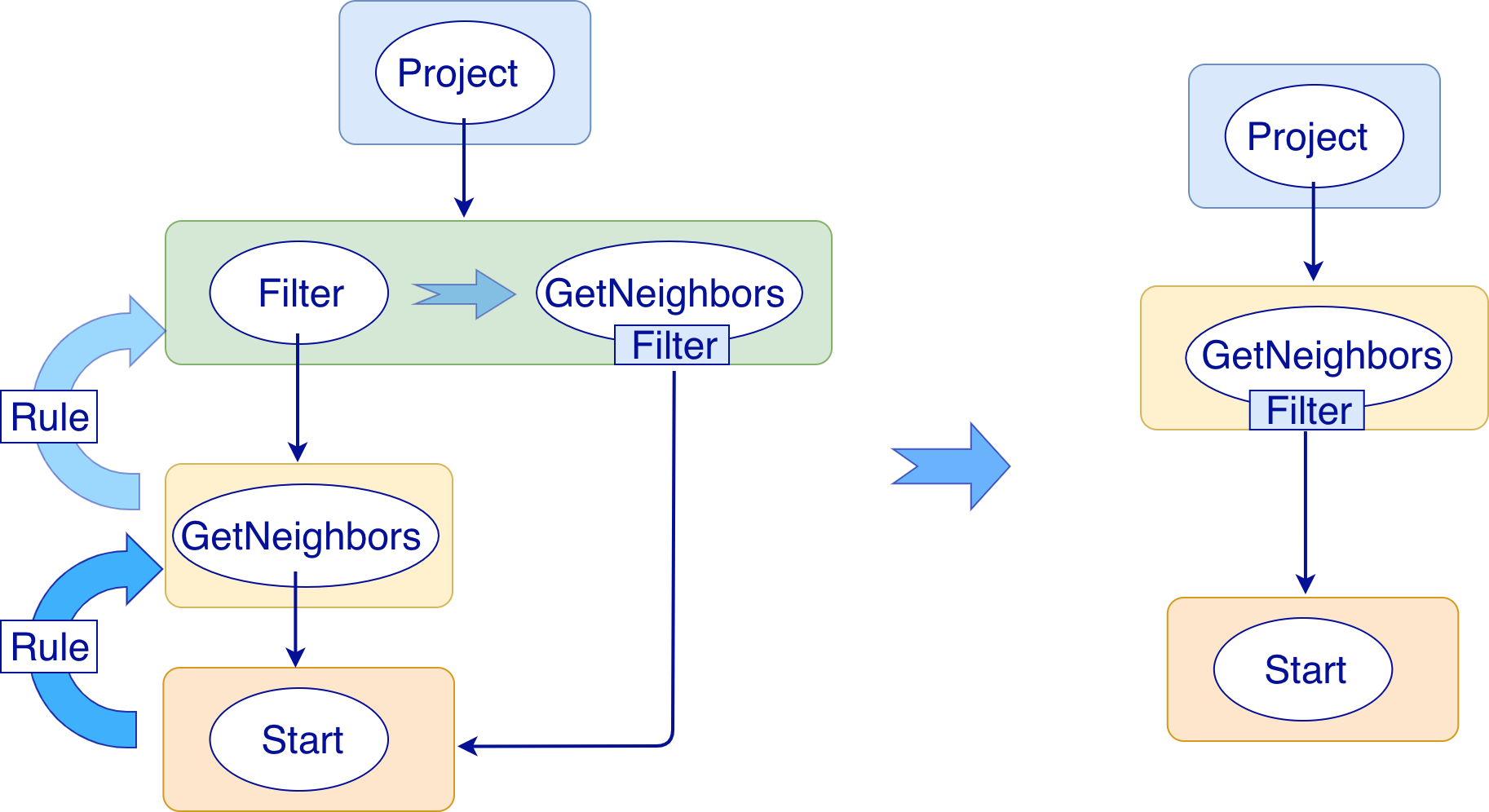 The optimized code is in the src/optimizer/ directory under the nebula-graph repository.

In the fifth stage, the Scheduler generates the corresponding execution operators against the execution plan, starting from the leaf nodes and ending at the root node. The structure is as follows.

Each node of the execution plan has one execution operator node, whose input and output have been determined in the execution plan. Each operator only needs to get the values for the input variables, compute them, and finally put the results into the corresponding output variables. Therefore, it is only necessary to execute step by step from the starting node, and the result of the last operator is returned to the user as the final result.

Now we will get acquainted with the structure of an execution plan by executing a FIND SHORTEST PATH statement.

To get the details of the execution plan of this statement, precede it with theEXPLAIN.

The preceding figure shows, from left to right, the unique ID of each node in the execution plan, their names, the IDs of their dependent nodes, the profiling data (information about the execution of the PROFILE command), and the details of each node (including the names of the input and output variables, the column names of the output results, and the parameters of the node).

To visualize the information, you can follow these steps: 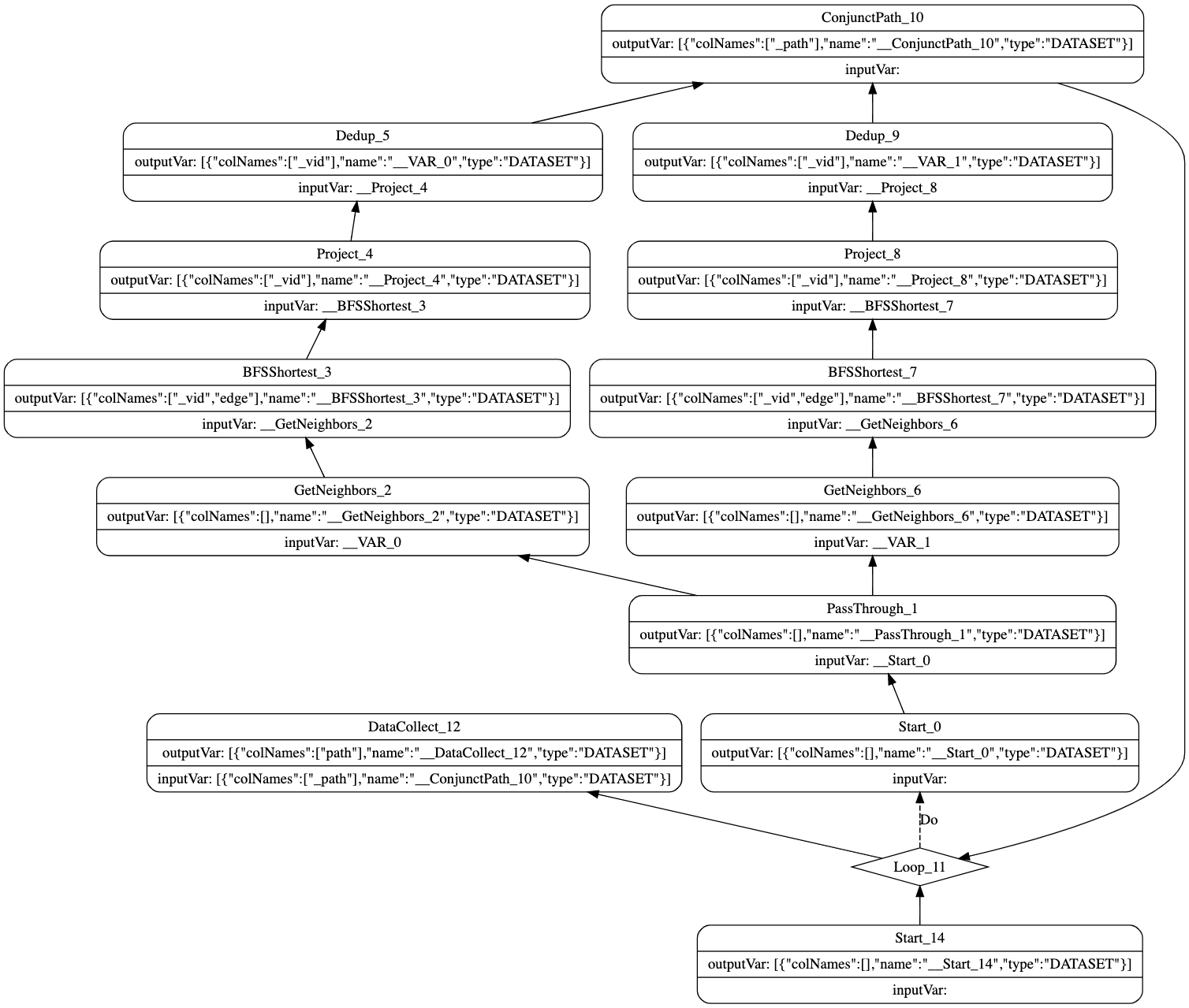 The shortest path algorithm uses the two-way breadth-first search algorithm, expanding from both “YAO MING” and “Tim Duncan”, so GetNeighbors, BFSShortest, Project, and Dedup have two operators, respectively, the input is connected by the PassThrough operator, and the path is stitched by the ConjunctPath operator. The LOOP operator then controls the number of steps to be extended outward, and it can be seen that the input of the DataCollect operator is actually taken from the output variable of the ConjunctPath operator.

The information of each operator is in the src/executor directory under the nebula-graph directory. Feel free to share your ideas with us on GitHub: https://github.com/vesoft-inc/nebula or the official forum: https://discuss.nebula-graph.io/

Published at DZone with permission of ji mingquan. See the original article here.