RT-Thread was born in 2006, it is an open-source embedded real-time operating system (RTOS) that provides a wide range of components and 250+ software packages for the Internet of Things (IoT).

RT-Thread is mainly written in C language, easy to understand, and has great portability that supports quickly porting to a variety of mainstream MCUs and module chips. RT-Thread applies an object-oriented design method to the real-time system, which helps to build the elegant code, clear architecture, highly modularized system, as well as easy to tailor.

RT-Thread has a Standard version and Nano version.

For resource-constrained microcontroller(MCU) systems, developers can tailor a Nano kernel that requires only 3KB Flash, 1.2KB RAM through the easy-to-use tools.

The architecture of RT-Thread is shown as follows: 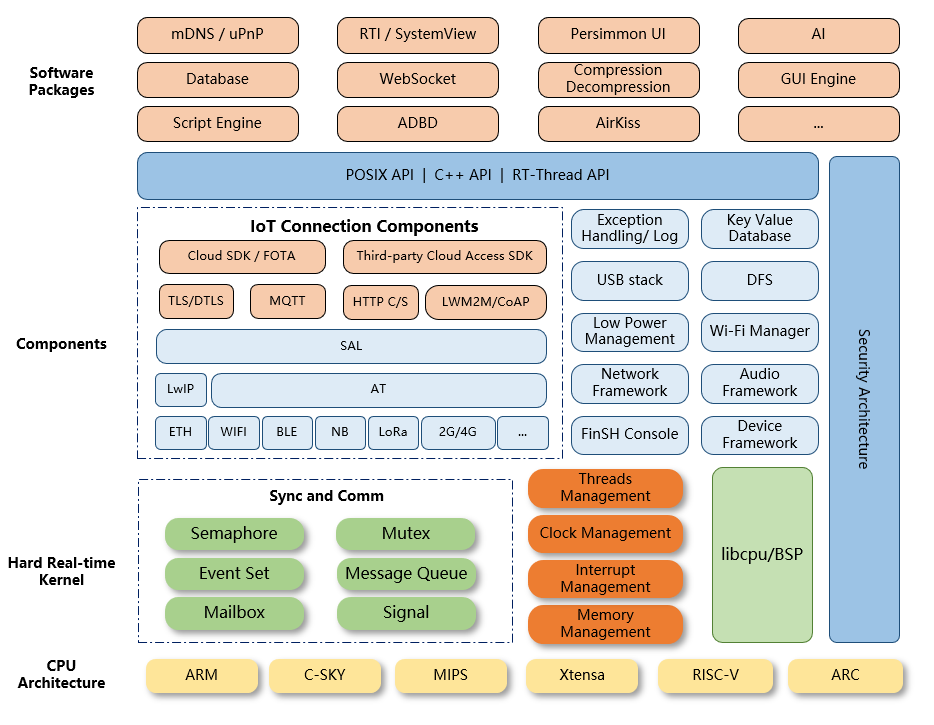 With the intention of benefiting more developers, RT-Thread Studio is free-of-charge.

RT-Thread Studio is developed on the basis of the native Eclipse with a high degree of customization and optimization, which makes the complex interfaces and functions concise, automatic and intelligent. In RT-Thread Studio, functions are comprehensible at a glance and many operations could be done just by clicking a button, such as downloading, configuration, debugging, and so on.

RT-Thread Studio supports a full range of STM32 chips for bare-metal development and offers a one-step toolkit, which contains an intuitive project manager, intelligent auxiliary code editor, easy-to-use independent program downloader. What's more, it supports a variety of emulators and serial console printing. All of them shorten the development time and simplify the difficulty of starting a project. In the future, more semiconductor chips will be added to RT-Thread Studio.

A variety of debuggers are supported

In addition to supporting the commonly used J-Link and ST-LINK, RT-Thread Studio now supports the wide range of DAP-LINK hardware debuggers, and more debuggers will be added soon.

RT-Thread Studio internally integrates rich high-quality reusable code resources. After a simple configuration, developers can reuse a variety of components, drivers and so on, RT-Thread has more than 200 software packages, covering a variety of high-quality categories of reusable software code packs, and the number continues to grow.

RT-Thread is always here to support you. Any questions, no matter software usage problems or project development issues, you can always reach us on RT-Thread Facebook, Twitter, Reddit community, and email.

Since the first release of RT-Thread in 2006, along the way, RT-Thread received many supports from the community developers and manufacturers, we feel so grateful for this. "Open Source is not just about sharing the code, it is about sharing every idea, talking with each other, exploring, finding more possibilities, and making progress together. The community is far more important than the code.” This is the spirit of open-source RT-Thread IoT OS.